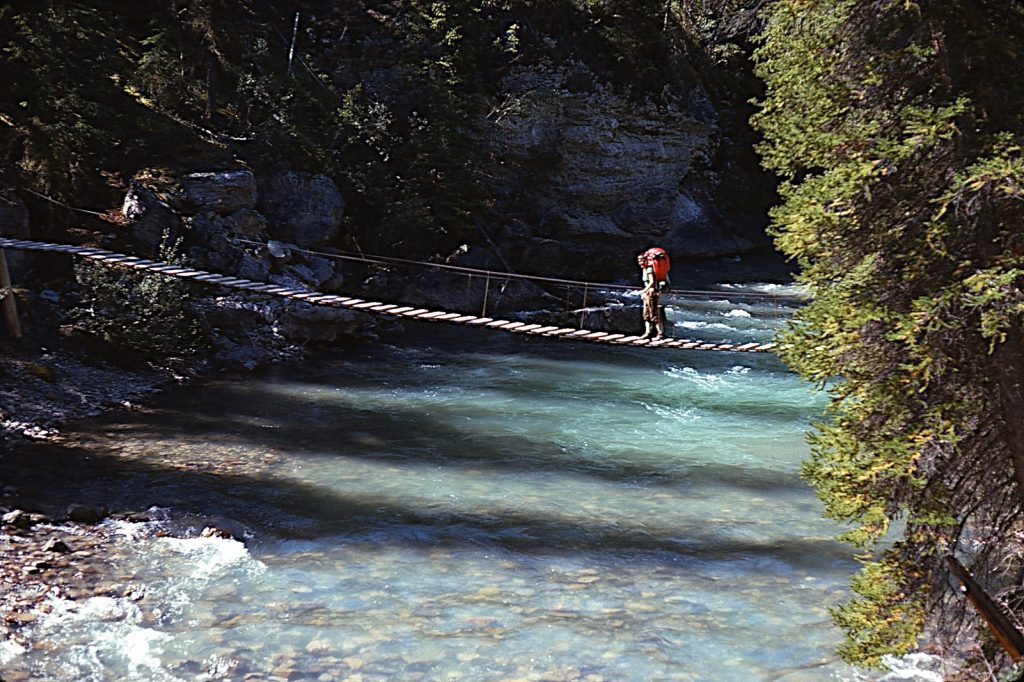 Setting off on any multi-day backcountry trip is always a sobering enterprise. When we completed Jasper’s North Boundary Trail in the late-1970s, we were assured that the track was well-defined and all major bridges, like this one at Blue Creek, were intact. But the Blue Creek bridge was lost many years ago and never replaced. Today, Parks Canada cannot recommend hiking the North Boundary until water levels recede late in the season, and then, there are no guarantees. This is just one of many longer trails in “Canada’s backpacking park” that is in danger of disappearing thanks to budget cutbacks. Photo by Brian Patton.

Washed out bridges that aren’t replaced. Deteriorating backcountry campsites with grotty outhouses. Landslides and fires wiping out sections of trails, some permanently. Tracks over alpine passes awash and churned into muddy soup. Numerous trails decommissioned (read abandoned). Is this the current state of affairs in Jasper National Park, a place we always called the backpacking capital of North America?

Since the town of Jasper boasts a very active population of outdoor enthusiasts, it is no surprise that the Jasper Fitzhugh covers backcountry issues better than any other weekly newspaper in the Rockies. And several recent articles have highlighted problems with the park’s wilderness trail system and infrastructure.

In September, Fitzhugh editor Paul Clarke published an investigation into the past and present of Jasper’s backcountry trail system (The end of an era: Jasper’s backcountry in a state of decay, Sept 21, 2016). In addition to yours truly, Clarke interviewed long-time trail crew supervisor Jim Suttill, Jasper communications officer Steve Young, and lifetime resident and Jasper Trail Alliance spokesperson Loni Klettl.

Comments by Suttill and Klettl were of particular interest since I hiked many of Jasper’s remote backcountry trails during its golden era and have observed the decline over the past two decades.

I’d always wondered how Jasper could do so much in its remote backcountry while neighbouring Banff Park did so little. And Suttill’s responses answered a lot of my questions, including the moment the funding started drying up in 1994. And as funding nosedived, something had to give.

Another Fitzhugh article (Parks slammed for ‘appalling’ trail conditions, Sept 28, 2016) looks at disintegrating trails and collapsing campground infrastructure in the Tonquin Valley—a popular destination that has a long history of horse-hiker conflict.

In addition, there is talk that Parks Canada might decommission the popular Astoria River trail into the Tonquin Valley following a  rockslide that covered a 200m section of the trail this summer (Rock slide in the Tonquin Valley raises safety concerns, July 27, 2016).

Another problem highlighted by the Fitzhugh is the washout of a suspension bridge over the Athabasca River on the Fortress Lake trail (Hamber Park cut off by JNP bridge collapse, Oct 8, 2014). The bridge is located at km 15 on the 24-km trail leading from Jasper Park’s Sunwapta Falls to British Columbia’s Hamber Provincial Park. But since the trail beyond the washed out bridge only serves hikers heading to a B.C. Park, it is a low priority for Parks Canada. And cash-strapped BC Parks doesn’t seem to have the wherewithal to fund a bridge that provides the only land-access route to its park.

To its credit, Jasper Park has always taken the backcountry more seriously than neighbouring Banff, and it still does. Banff prefers that its remote rivers remain unbridged and promotes a policy of random camping in many outlying areas.

And Jasper has always had park staff and people in the community who are active in the backcountry and lobbying for improvements. That’s why the conflicting views in The end of an era article are interesting. Former trail boss Suttill would like to see more funding for Parks Canada trail crews; Jasper Trail Alliance supporter Klettl feels that Parks Canada should encourage a larger role for volunteers.

Whatever your views on backcountry use, the Jasper Fitzhugh has begun a discussion that should be continued and expanded to all of Canada’s mountain parks. In the words of editor Paul Clarke: “Whether that’s beefing up the trail crew or allowing dedicated volunteers to share some of the workload, something needs to be done.”