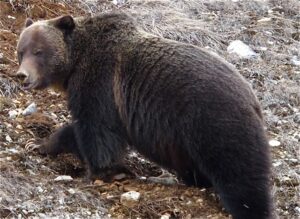 The Jonas Pass-Brazeau Lake Loop, one of Jasper Park’s most popular backcountry trips, has been closed for a month by an aggressive grizzly bear. It is a closure that extends from Nigel Pass on the park’s southwest boundary with Banff Park and around the park’s entire South Boundary to Rocky Pass.

The closure was initiated on June 17th after a grizzly in Jasper’s South Boundary country became habituated to human food sources and started raiding cabins.

As described by Visitor Experience Specialist Rogier Gruys: “We have a very determined grizzly on the SBT {South Boundary Trail}. He’s been caught on camera, breaking into tack sheds, and making a general mess. He’s been moving from cabin to cabin. Staff are actively working on this, reinforcing doors, etc. Hopefully that will deter him.”

Map of the initial closure area 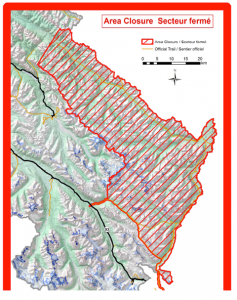