Dr. Gerard Lachapelle from the University of Calgary refines elevations of peaks in the Canadian Rockies, elevating some and downgrading others. 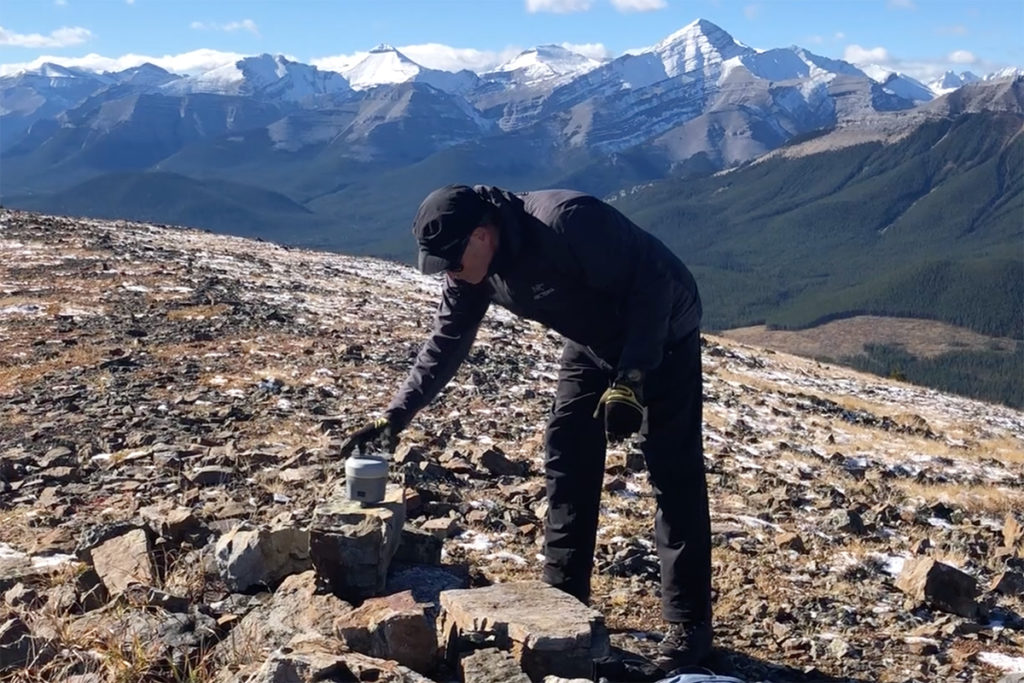 Two of the biggest problems in creating the first trail guide to the Mountain Parks was the accurate measurement of trail distances and elevations.

Distance was the most important element for the Canadian Rockies Trail Guide. We solved the problem by creating trail wheels (bicycle wheels with odometers attached) that we pushed around the Mountain Parks religiously for over 15 years.

Elevation didn’t seem to be as important. We studied 1:50,000 topo maps. If a lake or pass fell between two contour lines, we guesstimated that feature to be halfway between. In other words, a pass between the 7,200 and 7,300-foot contours (imperial measurements in those days), then its elevation became 7,250 feet in our trail guide. (What’s another 100 feet more or less when the elevation gain on a trail is circa 2,000 feet?)

When we listed elevations for mountain peaks visible on a given hike, we used elevations from topo maps or Thorington’s Climbers Guide to the Rocky Mountains. We always had our suspicions about the accuracy of those numbers.

According to Dr. Gerard Lachapelle, Professor Emeritus at the U. of Calgary, our suspicions were well founded. Despite his findings, you don’t need to toss your GPS watch, just realize its readings are simply “ballpark”. But as Professor Lachapelle discovered, if you really need an accurate distance for your hike, you’ll need to push a trail wheel.

Dr. Lachapelle kindly provided the following review of elevation and distance measurements in the mountains for publication on our website. As they become available, we will incorporate his elevations in future editions of the Canadian Rockies Trail Guide.

Handheld GPS (now more generally known as GNSS – Global Navigation Satellite System – as many “GPS” systems are in existence) devices of all types are now commonly used by hikers to follow their tracks and measure distances travelled, total height ascents and summit heights. A question often asked is their accuracy. The following explanations discuss summit height and distance travelled accuracy.

Let’s first clarify the definition of “height”. Heights above sea-level are universally used for obvious reasons, one being that it is important to know how high a feature is above the ocean (sea level) and its conceptual continuation under continents. Oceans of the world are connected and their average height defines the “mean-sea level”. This surface, also called the geoid, and its extension under continents, is not a simple geometric surface. Its approximation is an ellipsoid, that is an ellipse rotating around the Earth’s axis of rotation. The departure of the mean-sea level from the ellipsoid ranges roughly from 85m to -110m worldwide. In the Rockies, it is up to a few tens of metres. Detailed but more technical information on height systems in Canada is available from Natural Resources Canada (NRCan) at nrcan.gc.ca/height-reference-system-modernization/9054. The geoid variations under the Canadian Rockies are more pronounced than in other parts of the Canada due to the effects of mountain masses. Variations of at least 50cm per 10km are known to occur and are very difficult to measure. NRCan, who has a model of the geoid estimates it to be currently known with overall accuracy of a few to several decimetres. My own estimate is more conservative for rugged areas and mountain summits and is probably “50 cm or slightly better” (2 sigmas, hence 95% probability for those familiar with probability measures).

GNSS (GPS, Russian GLONASS, European Galileo, Chinese Beidou) can only measure heights above an ellipsoid, not sea-level. The substantial difference between the two surfaces has to be applied to GNSS derived heights in order to obtain heights above sea-level, hence the importance of having a good knowledge of the geoid.

Topographic maps in the Canadian Rockies were produced decades ago, in many cases using “classical” surveying techniques limited in accuracy and yet time consuming and expensive. These maps are only updated based on needs. Even updated maps, unless modern and expensive techniques such as airborne LIDAR equipped with high performance multiple sensors are used, cannot deliver summit accuracy at the metre level. In any case, high accuracy (1m) mountain heights are more a curiosity than a need, except of course for hikers, scramblers and climbers wishing to keep precise records of their accomplishments and assess accuracy and repeatability performance of their own portable devices. A prime example is the 11,000ers (feet) of the Canadian Rockies.

Barometers use atmospheric pressure changes to measure height as the relationship between the two is known. As pressure decreases, height increases. Barometers, including those now available in smartphones, provide relatively high accuracy readings of heights, namely better than 5m. The limitation is the atmospheric pressure itself, which can vary by several hectopascals (hPa, 1 hPa being the same as 1 mbar) or more. A change of 1hPa corresponds to roughly 10 m of height change. Hence accuracy is limited to a few tens of metres. Sometime, a hiker will obtain a barometer height value the same or nearly the same as the known height. This is because atmospheric pressure was nearly “normal” that day and all errors compensated; it was luck. Since smartphones now have a barometer, one can download an App to read the pressure/height directly. With the baro height recorded at the start of the hike and the end (at the same point), the difference will provide some measure of atmospheric stability during the hike, unless a weather front comes and goes in between, frequent during summer months. Mountain weather is unpredictable.

GNSS portable devices: Trails in the Rockies are forested for part of the way. GNSS signals are attenuated by the forestry canopy, increasing measurement errors in the process. Signal reflection from nearby trees and surfaces cause additional errors. Slopes block signals from some directions, limiting access to uniform satellite signal coverage. Depending of the severity of these factors, position accuracy can degrade substantially. A good example is a narrow canyon. One interested in measuring her/his device performance would go forth and back a few times in a canyon and examine its trajectory. Differences between successive walks can reach 100 m or more. Unaided GNSS derived heights are always worst in these conditions. In general, barometers are better to measure height gains and losses in these cases. Manufacturers of portable devices have consequently added a barometer to their devices to complement GNSS. These barometric heights are mixed with GNSS measurements to produce best estimated heights and height gains/losses under prevailing conditions. Before this mixing process occurs inside a portable unit, a general numerical geoid model is used to convert ellipsoid heights derived from GNSS to sea-level heights. Height accuracy is limited in the same way as above barometric heights. On a mountain top, the measured height will vary from time to time depending on the above conditions and accuracy will not be better than 10 to 30 m. If it is better, it is luck again, not because one’s unit is better. What if two units of the same model made by the same manufacturer are used; the results will still be different because measurement errors by each unit and signal reflection will be different.

Use of accurate GNSS equipment: Such equipment, often referred to as geodetic grade equipment, is totally different in terms of signal processing algorithms and cost. The latter, depending on hardware and software options, is in the $15k to $40k dollars range or more depending on software options. This is the type of equipment used by professional surveyors, road construction, large engineering projects, etc. In order to obtain best accuracy performance, the equipment is designed to operate under clear sky to avoid GNSS signal attenuation. No barometers are needed or used. Weight is now 1kg, including a battery lasting several hours. How accurate can a GNSS height be obtained on an open mountain summit? One to two decimetres after 20 minutes of measurements with a probability level well above 95%. If one takes the uncertainty of a few to several decimetres in the geoid correction, the accuracy of the height above sea- level is well within 1m, which is sufficient for the most avid mountaineers. After all, moving a loose rock on a summit can change its height by several decimetres.

Precise Canadian Rocky Mountain summit heights: I started a project to determine mountain heights in 2018 with the assistance of students and hiking friends; the project is on-going. Two types of equipment have been used to collect GNSS measurements so far, namely a Leica GS16 and Trimble R10. These are currently the best units in the world. Trimble is an American company and Leica a Swiss company. The GNSS electronics in Leica equipment has been developed and built by Calgary-based NovAtel/Hexagon, a leading GNSS equipment manufacturer. When reaching a summit, the GNSS unit used is turned on and collects data for 20 to 60 minutes. The picture below shows the Leica GS16 in action on the summit of Mount Outlaw, Kananaskis Country on 23 July 2019. GNSS data is processed using a method called Precise Point Positioning (PPP) with an NRCan online software service. Horizontal and vertical coordinates referring to the reference ellipsoid selected are obtained. The software also calls another software to obtain the geoid at the observation point and applies it to the GNSS-derived height to obtain height above sea-level. The overall height accuracy is consistently better than 1m. When the unit is installed on a cairn, the height of the latter is measured and subtracted from the value calculated to obtain the natural summit of the mountain (otherwise indicated). The heights obtained so far are given on kananaskistrails.com/mtnheights/mtnheights.php and includes the mountaineer(s) who did it. During Summer 2019, two student climbers working in my research group focussed on the 11000ers, whose exact height values were not well known. These values are also given on the above web site. The first precise height determination of 2020 was that of Mount Gordon in Banff National Park, measured on 19 February as 3159 m as reported on the above website and shown in the second photo below.