Although compared to many of the world’s wild regions, the Canadian Rockies is a relatively benign area when it comes to dangerous beasts and other natural hazards, hiking health and safety is still important as there are a few creatures, both great and extremely small, worthy of discussion. 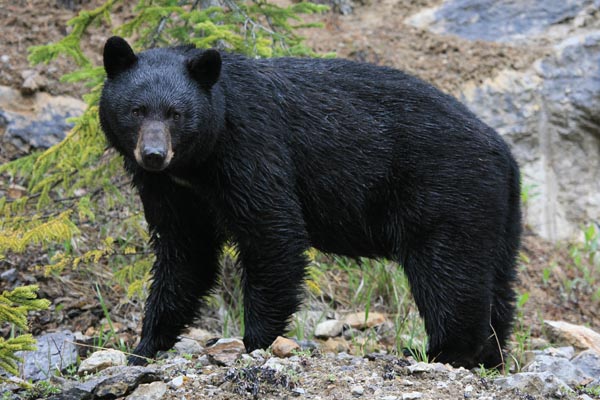 Black bears are widespread through the Canadian Rockies.

Does anyone go hiking in the Canadian Rockies without imagining a run-in with a bear? If so, we have yet to meet them. In fact, we are encountering an increasing number of folks who won’t hike here at all because of their irrational fear of bears. It seems that bear paranoia is at an all-time high.

Yes, the mountain parks are home to a modest population of black and grizzly bears. And, yes, most every year at least one person has a bear encounter somewhere in the Canadian Rockies, usually with grizzlies and more rarely with black bears. But when you consider the tens of thousands of people who hike the trails each summer, these incidents are extremely rare. (Driving to the trailhead is far more hazardous.)

Yet it is always a good idea to be prepared for an unexpected bear encounter and, even more importantly, to follow a few basic rules to avoid the encounter in the first place:

Far more people are charged and injured by elk each year than by bears. Aggressive elk are much more common in park townsites and on nearby trails than elsewhere in the parks since these “urbanized” animals have lost their fear of humans. Never approach elk at any time of year, but give females with young a very wide berth during the calving season (late May and early June), and the same with bulls during the mating season (late August to early October).

There are no other mammals that pose a significant threat to backcountry travellers. While animals such as cougar and wolverine have fierce reputations, they are usually very shy around humans and very rarely seen.

Of course, there are records of nearly every species having charged or chomped tourists at one time or another. (These include an irate mother spruce grouse that permanently scarred one of the authors.) The golden rule around all wildlife: always give animals room and never harass or feed them.

Mosquitoes are generally less of a problem in the southern Canadian Rockies than they are in the mountains and wetlands farther north. However, some summers are worse than others and certain areas are renowned for their bloodsucking hordes. Hikers do not need headnets or bug jackets, but repellent should be carried throughout the hiking season until early September.

Horseflies are another common nuisance during midsummer. Insect repellent has no effect on these large biting flies. While a heavy shirt and pants will protect you, horseflies are most active on warm, sunny days, when you are inclined to wear only shorts and a t-shirt. At least they’re slow to bite, so you can club 90 percent of them before they take their pound of flesh.

Second to bears, visitors worry about wood ticks—small, flat-bodied arachnids (related to spiders) that require a meal of mammal blood as part of their reproductive cycle. Ticks are abundant in dry grassy areas of the Rockies in the spring (early May through late June), and at elevations ranging from the lowest valley bottoms to 2130 metres (7,000 feet). They cling to low-lying shrubs and grasses, waiting for a potential meal to pass by. Once on a mammal, they can spend three hours or more exploring before burying their heads in its flesh, so hikers have a good chance of discovering and removing the beasts before the feast begins.

Although ticks in the Canadian Rockies have been free of Rocky Mountain Spotted Fever and Lyme disease (so far), they can cause a potentially fatal tick paralysis if they burrow at the base of the skull. The best precaution is to wear long pants tucked into socks or gaiters and to avoid lounging about on grassy slopes. Always check your clothing and body carefully following a spring hike (ticks are partial to heads, armpits and crotches).

When a tick is discovered, a simple touch or gentle tug often dislodges it. If it has already burrowed into the skin, do not try to burn it with a match or coat it with some noxious liquid, like gasoline or nail polish. Instead, grasp its head as close to the skin as possible with tweezers and pull slowly. If you can’t remove it, or mouthparts remain in the skin, see a doctor.

Another addition to the list of hiker miseries is the protozoan Giardia lamblia, a waterborne parasite that can cause severe and prolonged gastrointestinal distress. Giardia is carried by many species of animals, but the human infective strain is most frequently found in beaver, domestic dogs and, of course, humans. The parasite finds its way into mountain streams and rivers through the feces of these animals, but beaver are the animals best equipped to perpetuate the parasite in wilderness water systems.

Many local hikers are willing to take their chances in the upper portions of watersheds, particularly above treeline or where they feel secure there is no beaver activity or human sources of infestation. But the only way to be totally safe is to boil your drinking water for at least three minutes or use a portable water filter.

The only other hazard worth noting is unbridged stream crossings, which occur on some backcountry trails. While the creeks and rivers of the Canadian Rockies are relatively tame compared to the thundering torrents of British Columbia’s Interior and Coast Ranges, they can still be dangerous at certain times of the year.

As a general rule, rivers run highest in June and July. In the Front Ranges streams are usually highest during rainy periods when runoff sluices down into drainages from bare limestone peaks; stream levels in these eastern ranges usually drop dramatically once the rain stops. In the heavily glaciated Main Ranges, the highest runoff usually occurs during warm spells in July and August when glaciers are in full melt; these rivers are easier to cross in the morning after the flow has subsided with the cool of the night.

Any trail involving a major ford should only be attempted by river-wise backpackers. If the current is strong and water threatens to rise above your crotch, you should abandon the crossing altogether. Either look for a better place to cross, wait for water levels to subside or, if that is unlikely, retreat the way you came and live to ford another day.