The Canadian Rockies Trail Guide was the first comprehensive hiking guide to the region and was one of the first hiking guides in North America. 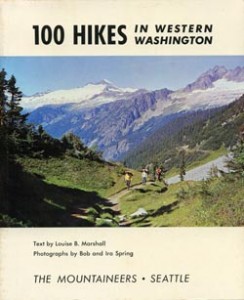 early hiking guidebooks were produced by non-profit mountain clubs, including 100 Hikes in Western Washington (1966), the first title for The Mountaineers Books. From a similar era was Tom Winnett’s Sierra North (1967), the beginning of Wilderness Press, and 100 Oregon Hiking Trails, published by Don and Roberta Lowe under the Touchstone Press imprint in 1969.

During research for the 1st edition of the Canadian Rockies Trail Guide, a trail wheel was used to measure hiking trails. Parks Canada had previously measured trails in Yoho and Waterton Lakes, but Brian Patton and Bart Robinson were the first to undertake the ambitious task of measuring trails in Banff, Jasper and Kootenay National Parks (and they re-measured those in Yoho and Waterton Lakes as well). 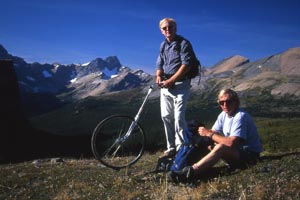 Brian and Bart with the trail wheel at Molar Pass, 1999.

Before the authors set out with their trail wheel, distances had mostly been estimated by wardens on horseback, who thought they knew how fast their horses travelled and extrapolated from that. Brian Patton relates the following: “In 1971, after measuring the trail from Sunshine Village to Mt. Assiniboine, I met Assiniboine pioneer Erling Strom. When I told him my measurement of 17 miles, he just smiled and said ‘we always said it was 20,’ and you could see he didn’t believe this young whipper-snapper with a bicycle wheel.”

Many publishers have been inspired by the success of the Canadian Rockies Trail Guide. In the early 1980s, Vicky Spring (daughter of photographer/conservationist Ira Spring) came to the Canadian Rockies and co-authored two impressive hiking guides published by The Mountaineers Books; both books are now out of print. In 1979, Tony and Gillean Daffern formed Rocky Mountain Books to publish the Kananaskis Country Trail Guide, which has since been broken in a number of different titles. Don Beers described the trails of Yoho’s best-known hiking destination in his 1981 book The Magic of Lake O’Hara, and followed up 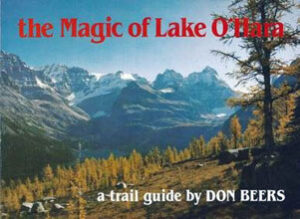 Over 50 years since the Canadian Rockies Trail Guide was first published, the original authors continue to spend much of their summers hiking, exploring, and photographing the Canadian Rockies. But input from readers has been greatly appreciated through the years, and has led to many long-term friendships. One such correspondent is Mike McReynolds, who first visited the region in 1976 and provided extensive information gathered on several epic backpacking summers over the ensuing decades.

Here are details of all ten editions of the Canadian Rockies Trail Guide: 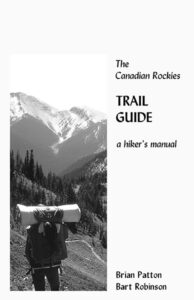 Summerthought Publishing was born with the publication of the Canadian Rockies Trail Guide in 1971. Researched by Brian Patton and Bart Robinson through the summer of 1970, it included trail descriptions within Banff, Jasper, Kootenay, Yoho, Waterton Lakes, Glacier, and Mt. Revelstoke National Parks; as well as select trails around Mt. Assiniboine and the Berg Lake Trail in Mt. Robson Provincial Park. A six-page description of the Great Divide Trail written by Jim Thorsell appeared at the end of the book. 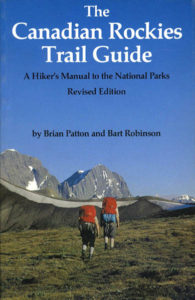 All trail descriptions were revised and the book redesigned. Chapters on Glacier and Mt. Revelstoke National Parks were dropped to make more room for trails in the Canadian Rockies. With more detailed trail descriptions and the addition of trails such as Fish Lakes-Molar Pass, Howse Pass, Jonas Pass, and the North Boundary Trail, the page count increased from 209 to 266. This edition included the first written description of the Sawback Trail (a name bestowed by author Brian Patton), between Mt. Norquay and Lake Louise.

The most successful year ever for the Canadian Rockies Trail Guide was 1980, when sales of the 2nd edition totaled 13,376.

Cover: The cover photo of two park wardens on the approach to Numa Pass was provided by Jim Thorsell. 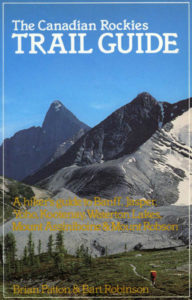 The authors ushered in a new era by using a computer (Kaypro II) to produce the manuscript for the 3rd edition.

With more detailed trail descriptions, the inclusion of the ambitious South Boundary Trail, and the use of images taken in the most remote regions of the Canadian Rockies, the page count was increased from 266 to 363. Mount Assiniboine and Mount Robson Provincial Parks were presented as separate chapters, with several trails within these parks described in print for the first time. The revised subtitle read: “A hiker’s guide to Banff, Jasper, Yoho, Kootenay, Waterton Lakes, Mount Assiniboine & Mount Robson”

Revisions were made where necessary, with expanded coverage of the newly rebuilt Iceline Trail in Yoho National Park and the Mount Shark access route to Bryant Creek – Mt. Assiniboine.

Cover: The cover remained the same as the 3rd edition. 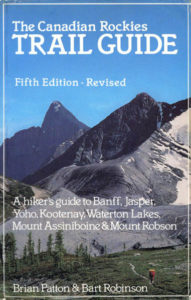 A straightforward update, with the authors making revisions to 45 trails.

Cover: The book is identified as the 5th edition on the cover, and white type replaced gold for the book’s subtitle and author names. 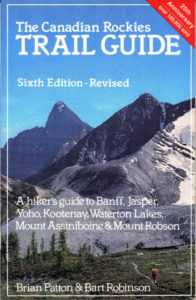 Another simple revision, with updated information included for at least 35 trails.

A red band across the upper right corner of the cover identifies this as the 25th anniversary edition, and that 180,000 copies had been sold.

Published by Conrad Stein Verlag, a 1994 German translation of the Canadian Rockies Trail Guide included only the most popular 33 trails in Banff, Jasper, Yoho, and Kootenay National Parks. Publisher Conrad Stein contributed a number of images, including the cover shot of Maligne Lake. The German translation was priced at DM 14,80 and the ISBN was: 3-89392-098-6. 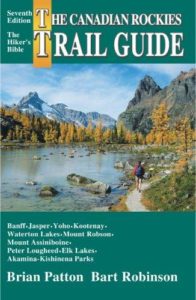 Total revision and redesign. Trails in Peter Lougheed, Akamina-Kishinena, and Elk Lakes Provincial Parks added; map count was expanded from 25 to 40, and all were produced digitally; and many new photos included.

Cover: The distinctive green-banded cover with a photo of hiker on Opabin Plateau (Yoho National Park) was taken by Brian Patton. 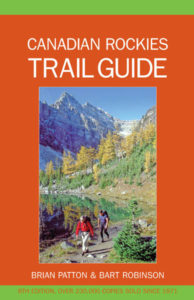 Revisions throughout the book, with some new photos. Rewriting of trails in Kootenay National Park to reflect 2003 wildfires.

Cover: The cover photograph of Lake Agnes was supplied by Pat Morrow, a well-known photographer/film-maker who makes his home in the Canadian Rockies.

The 40th anniversary edition of the Canadian Rockies Trail Guide was published in 2011, then revised and reprinted in 2015 and again in 2017. For the new edition, every trail was thoroughly researched, the entire book text was edited, and it was decided to leave decommissioned trails in the book, creating a reference to many major backcountry routes that are no longer detailed by Parks Canada reference material.

To commemorate the 40th edition a new Preface was written and on 1 May 2011 the Whyte Museum of the Canadian Rockies hosted a gathering of local guidebook authors and Trail Guide fans to open an exhibit on the history of Canadian Rockies hiking books.

Cover: The cover photo of the 40th anniversary edition was taken by John Marriott in the Tonquin Valley of Jasper National Park. 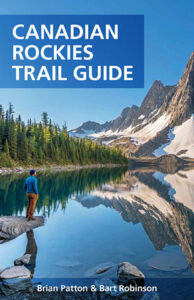 To commemorate over 50 years in print, the Canadian Rockies Trail Guide was redesigned and published in full colour.

The basic elements that have made the book so successful remain—distance outlines, extensive updates, and coverage of every official trail in the mountain parks—but the layout has been modernized. With the change to full colour, the distinctive 3D topographical data used by Gem Trek maps has been used to better illustrate the regions and trails