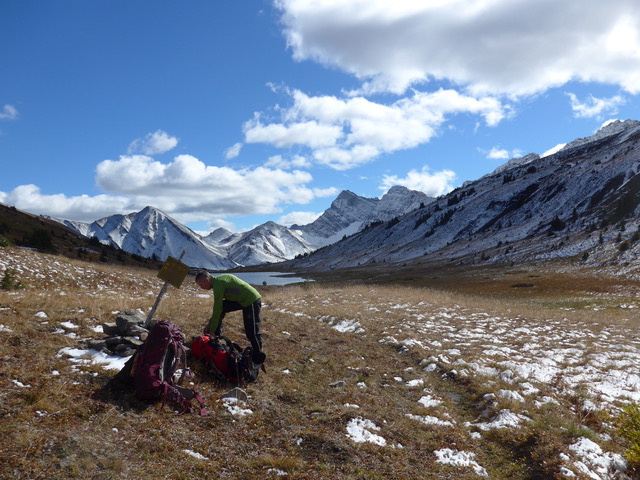 Mount Robson’s Berg Lake trail and Jasper’s Twintree Creek bridge washed out in 2021. That left backpackers with a truncated North Boundary Trail across the northern reaches of Jasper Park.

Suddenly, there was a blossoming interest in destinations further north—Hardscrabble, Glacier and McLaren Passes.

We’ve long considered these branch trails far more interesting than the North Boundary Trail itself. With no prospect of the Berg Lake trail reopening or the Twintree Creek bridge being replaced in the near future, we are pleased to see more adventurous souls heading beyond this rather mundane route.

Even as we were measuring the North Boundary Trail from the Celestine Lake trailhead to Mount Robson Park, we realized the real glories of Jasper’s north country lay beyond, up Blue Creek to Azure Lake and Deer Creek to Little Heaven and Glacier Pass. But completing a trip up those branch trails didn’t seem practical considering the distances involved and the lack of well-maintained track.

Soon after, backpackers shortened the North Boundary trip by starting from Rock Lake. A few years later, our trusted and faithful contributor Mike McReynolds completed the Blue Creek-Willmore Wilderness-Glacier Pass loop and provided a detailed description of the trip along with its hardships (20 crossings on the Willmore’s South Sulphur River).

While we relied on his description for subsequent editions of the trail guide, it wasn’t until the problems on the Berg Lake trail and at Twintree Creek that more backpackers diverted up Blue Creek and to Little Heaven.

This circuit was always reserved for more experienced backpackers. That became increasingly true in 2014 when the northern ends of the Blue Creek and Mowitch Creek trails were decommissioned.

Decommissioning means leaving vague trails to the ravages of deadfall and encroaching willow growth. And over the past eight years, the willows have had their way with the upper reaches of both Blue and Mowitch Creeks.

Trail finding in these northernmost valleys leading to Azure Lake-Hardscrabble Pass (Blue Creek) and Glacier Pass (Mowitch Creek) is difficult. The 25 km or so of trail in Alberta’s Willmore Wilderness connecting these passes has been well trodden by horse parties. However, there are confusing tracks leading in all directions, a lack of signage, and the South Sulphur River’s fording marathon.

Scenery worth the journey

Despite the trials and tribulations, there are few places that provide as much solitude and wild scenery. UBC professor Lizzie Wolkovich and her partner Jonathan Davies completed the circuit last September. Click the following link North Boundary-Willmore Circuit for Lizzie’s detailed account and photographs from the trip.