Carthew Summit is one of Waterton Lakes National Park’s popular trails that will be affected by this summer’s closure of the Akamina Parkway. Brian Patton photo.

Hikers bound for several of Waterton Lakes National Park’s most popular trails won’t have the luxury of driving to trailheads on the Akamina Parkway this summer. Parks Canada has closed the popular 16-kilometre roadway from Waterton Townsite to Cameron Lake while crews replace facilities at the Cameron Lake Day Use Area. The closure, which applies to pedestrians and cyclists as well as vehicles, is scheduled to last until November.

In addition to the popular Cameron Lake destination, trails affected by the closure include the Carthew-Alderson Trail (189), Rowe Lakes-Lineham Ridge (190), the Tamarack Trail (191) and the Wall Lake (196) and Forum Lake (197)  trails into B.C.’s Akamina-Kishinena Provincial Park. (Trail numbers refer to descriptions in the 9th edition of the Canadian Rockies Trail Guide.)

Parks Canada has announced that it will provide a free shuttle service to trailheads for hikers starting on Thursday, June 16, and running through Sunday, September 18. For details, bus schedule and seat reservations, link to Parks Canada’s Akamina Hiker Shuttle site. You can also book the shuttle at the self-serve kiosk located at Tamarack Outdoor Outfitters, 214 Mount View Road, in downtown Waterton. 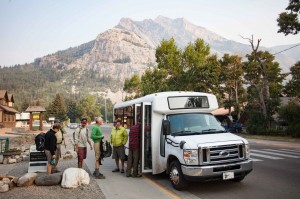