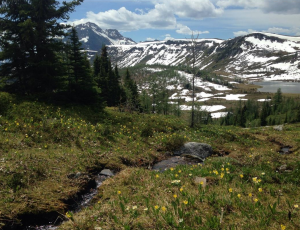 Healy Pass still has lingering snowpatches, but glacier lilies are bursting into bloom as the snow recedes. 2015 may set a record for early hiking in the high country. Kevin Van Tigham photo.

Brian and I have been monitoring the arrival of an early 2015 hiking season.   Neither of us, though, were prepared for just how quickly the snow at altitude would vanish, and neither of us can remember a season quite like it in the 40-some years we’ve been watching spring make its annual ascent to the alpine.

Based on recent hiker and trail crew accounts, the snow on the high trails of Banff, and its neighboring mountain parks, is rapidly disappearing. In the days just prior to the Solstice, hikers reported successful outings to Whistling Pass (2300 m), Harvey Pass (2545 m), and even Fairview Mountain (2745 m). Over a week ago, former Banff National Park Superintendent Kevin Van Tighem reported on Facebook that he “took a chance on Healy Pass” not only to find the trail open, but the glacier lilies peaking. (Thanks to Kevin for the accompanying photo.) Today, the Sunshine Meadows are wide open and the White Mountain Adventure buses are shuttling hikers up to enjoy the early flowers.

Just how early is the season? Snow data from Alberta Environment and Sustainable Resource Development stations at the headwaters of the Bow River basin shows the melt has been about two weeks earlier than normal and up to three weeks earlier than what we experienced last year. The figures also reveal an obvious reason: the snow that usually accumulates in March, April and May failed to materialize this year. Regardless of the hard data, it just “feels” like the conditions we are presently experiencing are similar to the ones we’d usually look for the second week in July. Happy high country hiking!