Bug Wars: The Death of DEET? 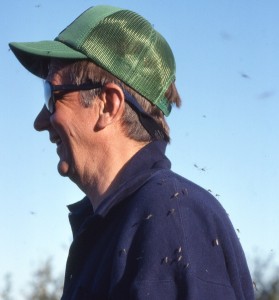 Mosquitoes? What mosquitoes? Canmore nature photographer Hälle Flygare has spent a lifetime in the woods and only laughs at mosquitoes and DEET repellent. And while I’ve spent enough time in the backcountry to develop an immunity to mosquito bites, I don’t like ’em buzzing and biting. I was encased in a DEET-soaked, mesh bug jacket when I took this photo. © Brian Patton

For over 50 years outdoor folk have been using insect repellents containing DEET (N,N-diethyl-m-toluamide). In concentrations of 15% or more, it has been the most effective and reliable barrier against mosquitoes, ticks, and other blood-sucking critters. Now there are options that may be just as effective and less onerous.

Consumer Reports has just published  test results of various bug repellents, and they rate picaridin (aka icaridin) and oil of lemon eucalyptus right up there with 30% DEET and well above brands with lesser concentrations. See “Insect Repellents in the Age of Zika” (July 2016).

I always considered DEET the gold standard for repelling mosquitoes and ticks, but after reading the Consumer Reports article, I decided to test a couple of highly-rated alternatives.

So far my experiments have been limited. I’ve wandered through a mosquito-infested hollow, scantily clad, lathered in 20% picaridin. It was just as effective as DEET in repelling mosquitoes. I was particularly fond of picaridin since it is odourless and not oily (unlike DEET) and doesn’t appear to damage surfaces, materials, and fabrics.

I repeated my test with 30% oil of lemon eucalyptus and found it effective during a brief exposure. It does have a natural lemony scent, but while it is plant-based, it is chemically synthesized. And I wasn’t particularly fond of the oily film it left on my skin.

There’s a lot of superstition and prejudice when it comes to the use and types of insect repellent. For example, many swear by a variety of natural products. Good for them, but there is no evidence that any of them work.

As for DEET products, I have a lot of bottles and wipes stored in my cupboard. I’ve always disliked its strong smell and oily feel, and I’ve damaged plastic surfaces on several occasions when I didn’t clean my hands after applying. But it’s always been effective when I needed it, especially when liberally applying doses in the range of 15% to 30%.

Even if picaridin and oil of lemon eucalyptus prove to be favourable alternatives to DEET products, many people will use what is most commonly available. And since companies like Off!® dominate most store shelves, that will be DEET for the foreseeable future. Plus, hiking in the mountains wouldn’t be the same without the pungent aroma of alpine fir and DEET, would it?

As for me, I’ll likely hike without repellent whenever I can this summer. But when I’m trapped in bug-infested terrain, I’ll be testing the alternatives and report back with my findings at some point in the future.