The trail to the Castleguard Meadows via Alexandra and Castleguard Rivers has never been easy. But since we first included it in the Canadian Rockies Trail Guide, there has been no maintenance and things have only gotten worse. A few intrepid backpackers make the journey each summer, either via the 35-km trail or cross-country over the Saskatchewan Glacier. Here is a current look at the entire route, trail and glacier, as travelled earlier this month by blog contributor Gavin Fitch. 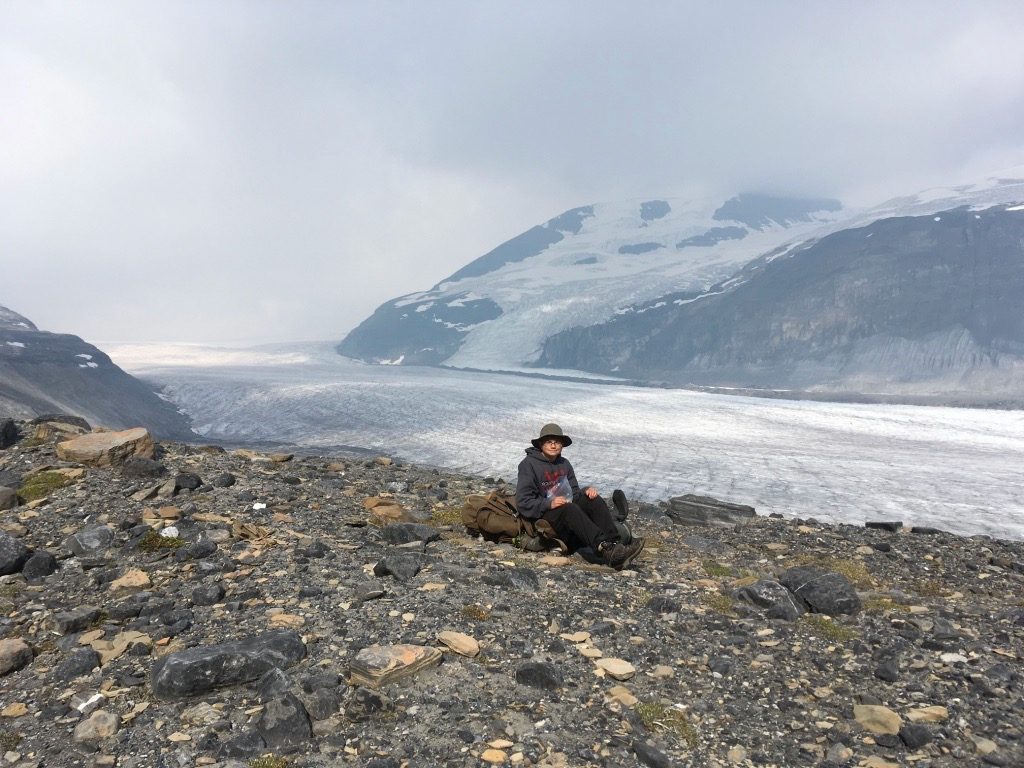 Overlooking the Saskatchewan Glacier from the pass at the northern edge of Castleguard Meadows. Gavin Fitch photo.

Last week, August 12-16, 2017, I hiked into Castleguard Meadows via the Alexandra and Castleguard Rivers with my son and an old friend. This trail has not been maintained by Parks Canada for many years and it shows. It is in poor shape and very demanding—a proper topo map and compass (and preferably a GPS unit) are a must. Fortunately, it is also very rewarding.

After crossing the North Saskatchewan River on a good bridge, the fire road follows the river south before turning west up the Alexandra River valley. Not far from the trailhead you come to the first of many creek crossings. This first one has an old damaged bridge that is still useable. Enjoy it, because after that there are NO bridges the rest of the trail. About 3 km in, the trail is covered for a short distance by debris from an avalanche/slide. You have to bushwhack around this obstruction, below the trail. After that, things are fine until the trail comes to a crossing of the Alexandra River (11.7 km in the Trail Guide).

When we were there, the river was absolutely not fordable. We followed a discernible makeshift trail along the north bank of the river. However, it peters out after a short while (a couple hundred of metres). After bushwhacking for a while through overgrown forest, we gave up when we realized that the main channels of the river had moved to the south side of the valley. So we descended out of the forest, crossed a sluggish side channel and then walked along the river flats the rest of the way to Terrace Creek. It was actually really nice walking: the valley is flat as a pancake and very wide with beautiful unobstructed views up and down valley.

At the confluence of Terrace Creek and Alexandra River there is an old outfitters camp, complete with a dilapidated cabin and crumbling corrals. This is where we camped. The next morning we forded Terrace Creek, which was significantly lower than it had been in the afternoon—something to keep in mind when considering where you want to camp. On the other (west) side of Terrace Creek there is another old campsite, complete with a bench. We picked up the fire road just upstream (north) of the campsite. From Terrace Creek to the old Castleguard Warden Cabin, the fire road goes west in a more or less straight line, in and out of the forest and the river flats. On the flats it becomes very faint at times but the way is always obvious.

The trail swings uphill away from the river just before reaching the old warden cabin. It carries on to the left of the cabin and then drops into a low and wet creek valley. Beyond the cabin, the trail is VERY overgrown with willows. We lost the trail in the low area beyond the cabin before picking it up again on the right bank. The first 4 km or so past the cabin is dark and gloomy—the Castleguard valley is narrow and the forest is thick and close. Fortunately, just past 4 km the trail gets within eyeshot of the Castleguard River. It is awesome—a classic mountain torrent racing through narrow canyons and thundering over small falls. There are several fantastic views of the river over the next 4 km or so.

At about 8.5 km from the cabin you come to a major tributary that must be forded. We arrived late in the afternoon and the water was high. On the left side of the trail there is an old fire ring and just downstream from that is another fire ring and a clear flat space big enough for a couple of small tents. We decided to camp there for the night. In the morning, as with Terrace Creek, the water level in the creek was much lower and the ford not too bad. From the ford, it is a short distance to where the trail comes back to the Castleguard River.

Based on the topo map, this is where the trail west to Watchman Lake and Thompson Pass branches to the left, across the river. I would not want to ford the Castleguard and we could see no discernible trail on the opposite bank. The trail to the Meadows, however, swings to the right along the near bank of the Castleguard. Soon there are a couple of nasty fords over tributaries—nasty not because they are wide or deep but because the creek valleys run down a fairly steep slope and are choked with deadfall.

Not far from where the trail turns right to follow the near bank of the Castleguard River, there a couple of nasty fords–nasty not because they are wide and deep but because the terrain is steep and the creek valleys are clogged with deadfall. On the far side of the second creek we lost the trail completely in the willows and deadfall. Spent a miserable hour or so bushwhacking but found it just before it begins the steep section below the meadows. This part was easy to follow. At the top of the climb the trail becomes faint as it enters the meadows but goes in a fairly straight line to a creek running through the east side of the meadows. The campsite is on the east bank of the creek. There is an old sign indicating the camp and a workable outhouse, which was nice.

In short, the trail to Castleguard Meadows is not for the faint of heart. It can only be described as being in poor condition and presumably getting worse every year. It’s a shame because, as advertised, the Meadows are glorious. We spent two nights there and I could have happily stayed longer.

Based on the misery we endured coming up the Castleguard River, we took the Saskatchewan Glacier route out. That was an amazing experience. The hike through the meadows to the glacier is wonderful. The only real difficulty is getting down the very large lateral moraine to access the glacier. It is steep and rocky and muddy. Once on the glacier, the walking was easy.

As you reach the toe of the glacier, it is obvious that there is much more space and flatter walking to the left (north) of the meltwater lake than the right (south). Yet the 1:50,000 topo map shows the trail on the south side of the valley, in particular on the south side of the Saskatchewan River. We trusted our eyes and chose the north side. There is no trail through the avalanche debris/river flats but the route is obvious–down the valley to where the forest begins.

When you finally reach the end of the flats, you pick up a trail on the north verge of the forest. This goes a short way before coming to a deep chasm where the river bends north. This chasm is “bridged” by a mishmash of very old fallen tree trunks–a rather exciting way to cross a deep (albeit very narrow, thank god) canyon.

Now, as per the map, you are on the south side of the river and the trail turns into an old fire road. From there the trail is good and it is a short way to the highway, at the “big bend”. Unfortunately, though the highway and parking lot are plainly in view you have to keep following the fire road farther south and then east. After a short while, there is a junction where the fire road bends south (right) and the trail stays east (left), following the river. It is not far from there to the trailhead, an old bridge of the North Saskatchewan.