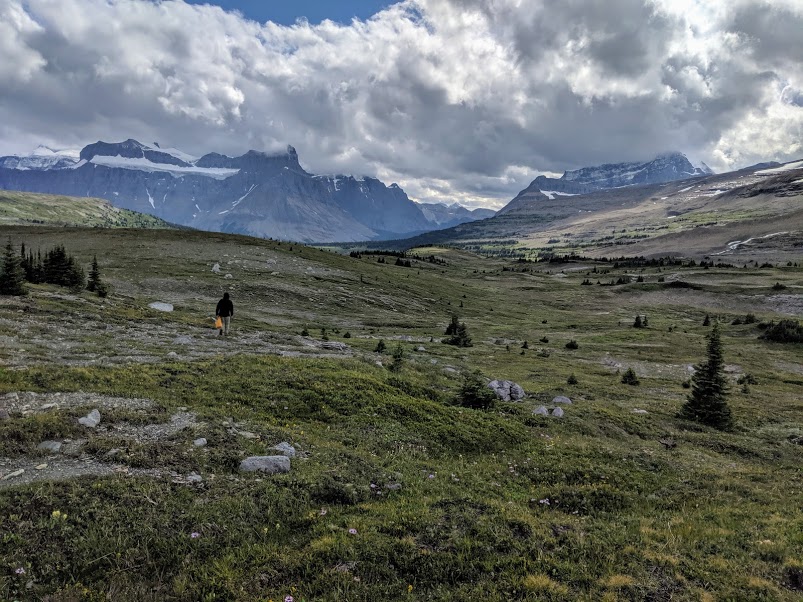 We’ve had quite a bit of interest in the Castleguard Meadows over the past few years. Several contributors have provided descriptions of this overgrown, difficult 35-km route.

In May, Christian Gilroy sent another account of a 5-day in-and-out trip that he completed last August. While all our previous postings provided by other contributors are valuable, Christian’s fits what we experienced in the “old days”, albeit with a less-defined track.

Anyone planning a trip to the Meadows should read Christian’s account. In short, don’t ford any major rivers (like the Alexandra or the Castleguard), but stay on the right side (true left) of these rivers all the way to the meadows. You will have stretches of trail-less bushwhacking and side streams to ford, but nothing as serious as trying to wade these rivers (the Alexandra impossible, the Castleguard difficult-to-dangerous).

We attempted the trip to the Castleguard Meadows from August 16th to 20th 2019 (5 days / 4 nights), which proved to be the right amount of time for us. Aware that the trail is no longer maintained, we decided we were keen enough for adventure to take it on (thank you to the few other folks that have shared trip reports in the past couple of years – they were a great help in piecing the route together). This trip report focuses on the parts of the hike where we found it most difficult to find the trail. Anyone undertaking the trek should be prepared for frequent stream crossings, climbing over, under, and around deadfall, and many willows and saplings to the face. We have skipped over it in the report, but these conditions were essentially constant. For those with experience finding their way, and craving a true wilderness adventure, the Castleguard Meadows are a pristine reward. Parks Canada has designated it a Special Preservation Zone, decommissioning the trail but leaving the backcountry permit available for hardy hikers wishing to make the trip.

For the first 11.7km, the trail is overgrown, but the remains of the road are fairly obvious. You should have no problems following the route. The landslide debris previously blocking the route at km-3 has been mostly cleared and a route through is apparent. Much deadfall on the road had been recently cleared, but some remains. Despite the spider webs, bushes, and saplings overtaking the old road, this will be the easiest portion of the hike. If this introduction frustrates you, be warned that it gets much more difficult.

Eventually (around km-11.7), you will descend into the Alexandra valley to a point where the road (or bridge?) has been washed away by the river. From here you must climb up the bank to your right and make your way through the forest, but not for more than 200 meters. As soon as the main channel of the Alexandra starts to cross over to the south end of the valley, allowing you space to walk on the river flats without fording the main channel, make your way down to the valley bottom and walk on the gravel. Do your best to find the traces of the road, but generally, walking along the gravel is pleasant and easy. Ahead of you (to the west) you will see that the forest reaches across the valley towards the south end. Do not enter the forest unless you are on the road or enjoy bushwhacking. The road curves south, along the main channel, and when it approaches Terrace creek, the road bends north and follows the eastern bank of Terrace creek to where there once was a bridge. Near the bridge there are many decent spots to ford the creek.

The road continues west from the washed-out bridge and takes you pretty much the rest of the way to the Warden’s cabin without trouble. Good trail finding skills are needed to keep track of the remnants of the road, but the general direction you should be going is obvious. When you approach the cabin, a faded white sign marks the spot where the trail re-enters the forest and curves up into the Castleguard valley (towards the cabin). The warden’s cabin is a nice campsite, with a firepit and outhouse, and a wood fence around the perimeter. If you are sticking to the 5D/4N itinerary, we would suggest making camp here for the first night, as the following day is more challenging. We hiked the 21km in about 6 hours on this day (4.5hrs on the way out, when we were more familiar with the route). 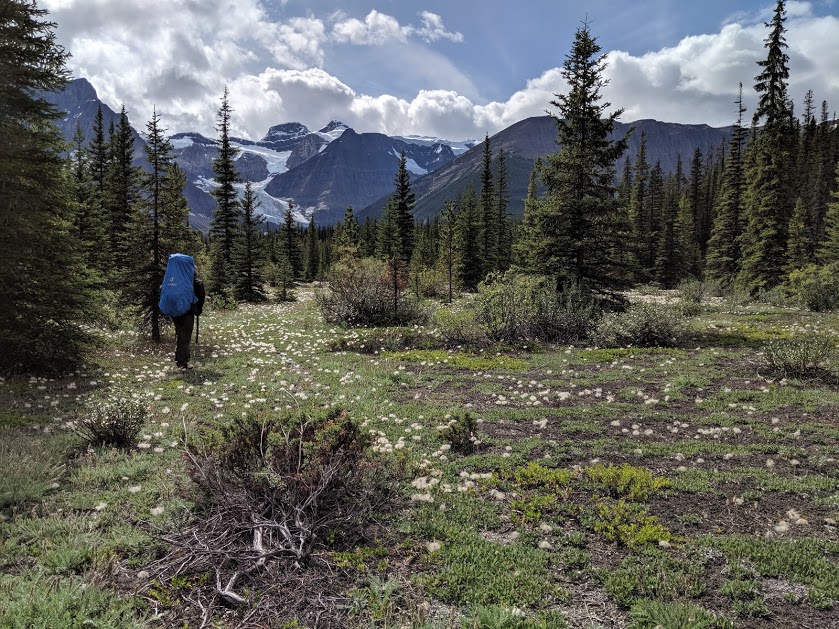 From the Warden’s cabin, the trail continues up the Castleguard River valley. The trail is apparent for the first 8 or so kilometers. It eventually curves abruptly downhill towards the river, and you will find yourself at the edge of the Castleguard, on a sandy bank about 5 ft above the water. From here, if you look upstream to where the river comes into view, you are looking at at the spot that the trail picks up again and enters the forest (roughly 200 meters away). Remember that this is where you should aim to return to the river’s edge. On your right, the sandy bank climbs quite high, and two streams tumble into the main channel from the point where the riverbank is highest (about 30-40ft up from the Castleguard). For now, you will need to climb up into the forest to avoid any attempts at fording the Castleguard. The river is strong here and any crossing would be ill-advised during the summer months. Climb up into the forest, following the path for as long as you can. If you lose the path, do not continue uphill but instead traverse the slope, crossing the two streams while in the forest. Once you’ve crossed the two streams, you should make your way downhill along the forest edge to the spot 200m upstream of where you were looking at the river earlier. From here (52.06039, -117.21952), you should find the trail that will take you up to the meadows.

Again, I would advise anyone against heading uphill until they have found the trail. On the way in we spent one very long kilometer struggling through the forest to find the trail, which we thought was uphill from us, but was actually just further up-valley.

Once on the trail again, you shouldn’t lose it until you are up in the meadows. The path is very steep, and not a pleasant way to end the day, but the meadows are exceptional. We were greeted by a multitude of wildflowers and grizzly digs as the trees opened up, and eventually you find yourself in a wide-open valley. In the meadows, Parks Canada requires you to camp within 100 meters of the old campsite (52.07698,-117.21213), which at this point is simply an outhouse (this, at least, is in good shape).

For those who brave the hike in, the Castleguard Meadows are a truly stunning alpine wilderness. The vastness of the area is better experienced than described. We spent one full day exploring the area and would hardly make it a few steps without spotting wildlife. Golden eagles scouring the cliffs for prey were a notable highlight, along with prairie falcon, mountain bluebird, warblers, and many other birds. Plenty of pika and hoary marmots as well. Evidence of grizzlies is abundant, and we even passed what looked like an old den. The meadows are surrounded by glaciated peaks: Alexandra and the Lyell Icefield to the south, Mounts Castleguard, Athabasca, Andromeda, and the Columbia Icefield to the north. If you walk to the northern end of the meadows (about 10km from the campsite), you have the Saskatchewan Glacier at your feet. If you can afford to, budgeting for a second day in the meadows in case of bad weather would be prudent.

Not much to report for the way out. Climbing down from the meadows is much easier than the steep climb up. We camped at the warden’s cabin again and made our way out under blue skies on day 5. Despite a few hours off-trail on the way in, we learned from those missteps and had no issues on the return trip. All-in-all, a challenging but deeply satisfying adventure.