Coping with gridlock in Banff 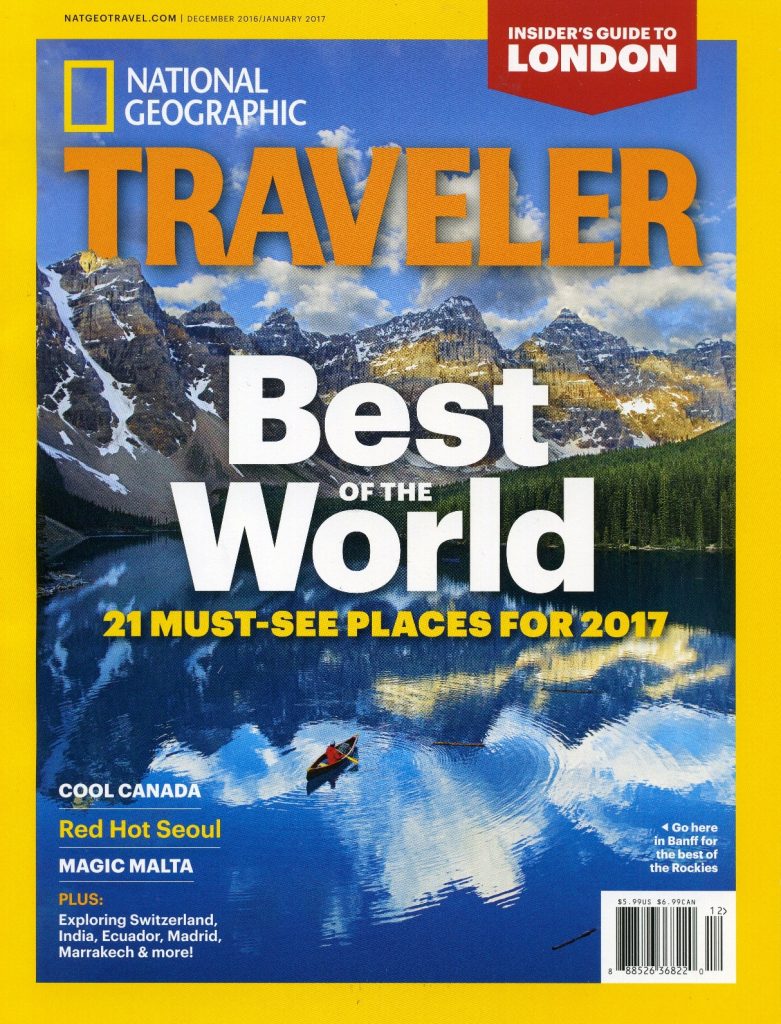 Considered to be the most widely read travel magazine in the world, National Geographic Traveler has highlighted Banff National Park as one of the “must-see places” of 2017. The cover photo of Moraine Lake was taken by Canmore photographer Paul Zizka.

Planning a trip to the mountain parks this summer? Prepare for gridlock.

Canada, the Canadian Rockies, and particularly Banff, are everywhere you look these days. On the cover of the December-January issue of National Geographic Traveler and as the subject of a flattering feature article. And as a full, two-page photo spread in Lonely Planet magazine’s “Best in Travel 2017”. Just two examples of the flood of publicity lauding  travel to Canada, particularly the national parks, during the country’s 150th birthday year.

Most of this international interest was triggered by an official announcement in January 2016 by Minister of Environment and Climate Change Catherine McKenna. “To celebrate our country’s 150th birthday, the Government of Canada is offering the gift of free admission to all Parks Canada places to Canadians. It is fantastic that so many people are excited about free admission and my hope is that every Canadian family will visit a national park, historic site or marine conservation area in 2017.”

But it isn’t just Canadians who are eligible for and excited by complimentary national park passes. When the website dispensing 2017 passes went online during the first week of December, it promptly crashed. And by week’s end, over a half million passes were ordered by Canadians and interested travellers from around the world.

Interest is particularly high among Americans. The sagging value of the Loonie in relation to the U.S. dollar sparked a dramatic increase in travel from the U.S. last year. In September alone, 1,414,075 Americans entered Canada, an increase of 11.5% from 2015. And since Americans are particularly fond of national parks, the free  Discovery Pass will inevitably create an explosion in cross-border travel.

The “Trump Effect” and the Chinese Connection

Coupled with the low Canadian dollar is the “Trump Effect”. For millions of Americans who are less than thrilled by the outcome of their recent Presidential election, Canada is seen as an attractive escape—a brief respite from the unending deluge of news featuring their new “tweeting” President.

For some Americans, it’s not just about taking a short break. A recent call to the Banff Park Visitor Centre came from a politically disillusioned American couple. They were looking for a pleasant, centrally-located campsite in Banff while they investigated relocation to Alberta or British Columbia.

The expected crush of new visitation isn’t just from south of the border. Loosening of restrictions by China has seen a dramatic increase in travellers from that country. That includes a 23% jump in the past year, making China the third largest source for international tourists to Canada. That interest in Canadian travel is so great that Hainan Airlines initiated three direct flights from Beijing to Calgary this past June. (Six Chinese airlines are already providing direct flights to Vancouver—more than any other destination in North America or Europe.)

Conditions are all in place for “a perfect storm” of summer gridlock in the mountain parks. Banff Mayor Karen Sorensen is very concerned about the free pass program and how traffic could overwhelm the town. While Banff is developing a shuttle bus system to move visitors, intercept parking is currently unavailable within town boundaries. And Parks Canada isn’t offering anything significant on the periphery.

The situation at Lake Louise-Moraine Lake isn’t any better. While a limited shuttle bus service ran last summer, few travellers were aware of it. Peak periods saw travellers directed back onto the Trans Canada Highway since there simply wasn’t any parking at the lakes or in the village.

What’s a hiker to do?

So, what’s the strategy for visitors who want to hike in the Bow Valley corridor, especially at Lake Louise and Moraine Lake? First off, don’t even dream of driving to parking areas at these two prime destinations after mid-morning during July and August (and probably June and September).

I’ve never been a morning person, but last year I managed to stay ahead of the hordes in the Yoho Valley with an early start. It does take a lot of planning, and you’ll need to find a place reasonably close to the trail to overnight prior to your hike (often easier said than done).

Another option is hitting the trail in the evening, around 6 o’clock, when parking spaces start opening up. And in late June and July, you have light until 9 o’clock or later, enough time for a two- or three-hour hike. On many trails, these hours provide some of the best light of the day and excellent opportunities for photography.

Hopefully, Parks Canada will step up to the plate and provide an expanded, well-advertised shuttle bus service for both Lake Louise and Moraine Lake (and not just September for the latter). Contact Park Visitor Centres before your trip and find out where and when shuttles are operating. And use them.

This summer should should serve as a wake-up call. Canada’s national parks need to enter the 21st century. Eliminating gridlock and ensuring a quality of visitor experience will take a lot of creativity and a dramatic increase in funding.