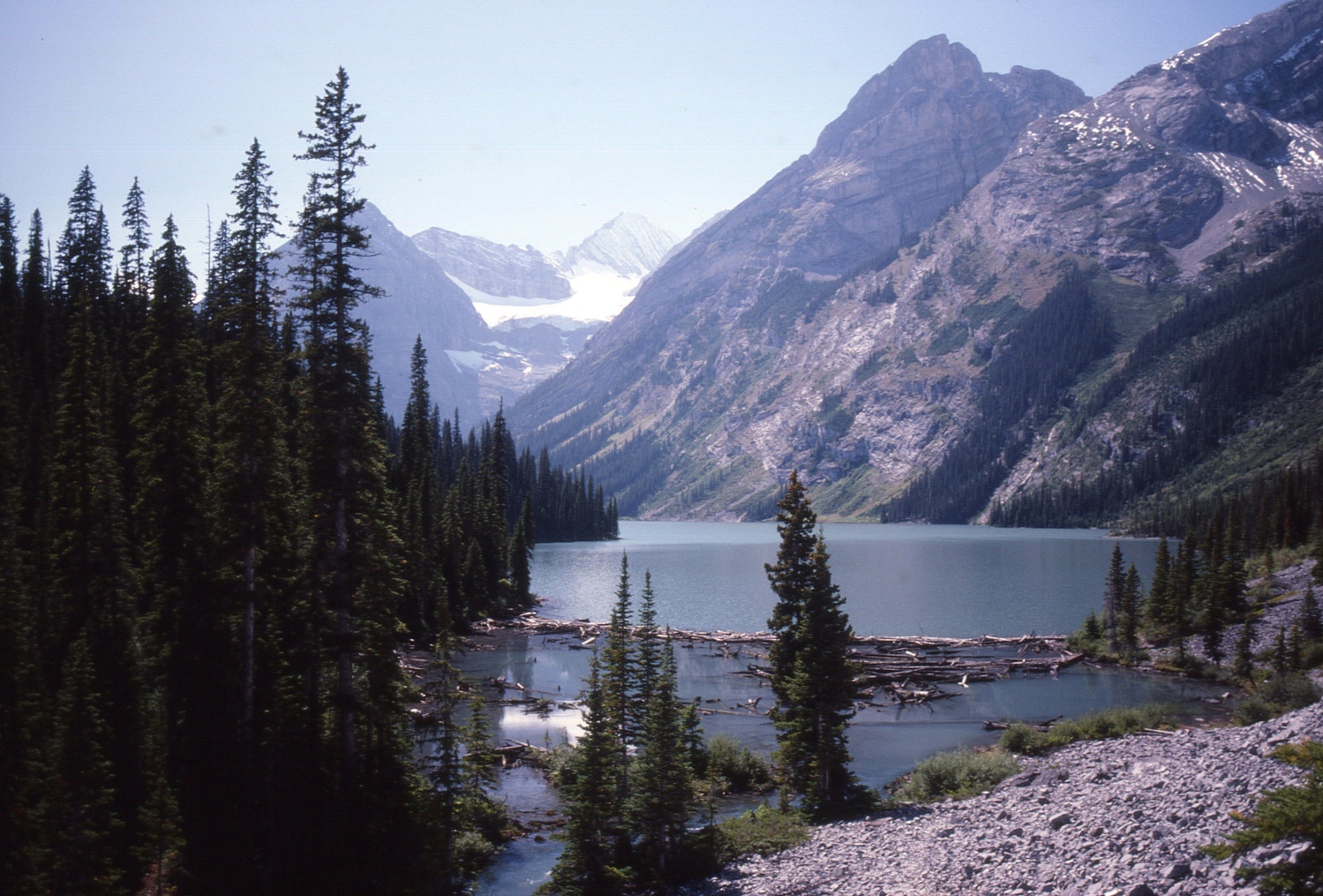 Upper Elk Lake from the rockslide viewpoint. When this photo was taken, a bridge spanned the outlet in the canyon below. Following 2013 flooding, the West Elk Pass-Fox Lake trail was relocated further east, bypassing this outlet and making a more direct approach to Lower Elk Lake. But a short detour on the old trail still provides this fine view of Upper Elk Lake. Brian Patton photo.

The core trails in B.C.’s Elk Lakes Provincial Park are fully functional again following a three-year recovery from the floods of 2013. But one of the most popular trails into the park via West Elk Pass has been relocated and no longer travels direct to Upper Elk Lake.

Nearby Peter Lougheed Provincial Park in Alberta took a big hit from the 2013 floods, but all the trails in Elk Lakes were blasted by the deluge. Most every trail in the core area of the park required major repairs and bridges had to be replaced.

The biggest change for visitors hiking in from Peter Lougheed Park is the West Elk Pass trail (211). Previously, you arrived at Upper Elk Lake and its outlet bridge after crossing a rockslide. But a major washout on the rockslide and the loss of the outlet bridge inspired a relocation of this important access route.

Now the West Elk Pass trail descends directly to a junction with a refurbished trail between the Lower and Upper Elk Lakes. From this junction, you can hang a right to Upper Elk Lake or turn left for Lower Elk Lake, the park’s main campground, and the Alpine Club of Canada Hut (see map below).

While we haven’t had a chance to remeasure the West Elk Pass trail, the change in total distance to both Upper and Lower Elk Lakes should be minor. And you can still detour west from the main trail for 200m or so to the washed out rockslide and a great viewpoint for Upper Elk Lake.

Though you can drive the 67-km BC Forest Service Road north from the Elkford environs to a parking area at the park’s east boundary (just 1.2 km from Lower Elk Lake), most visitors arrive via one of three trails running south from Alberta’s Peter Lougheed Provincial Park.

When we first hiked to Elk Lakes, it was designated as a recreation area and visitation was light. But that was before the ranger cabin at the east entrance was transferred to the Alpine Club of Canada and turned into a 14-person hut. Known today as the Elk Lakes Cabin, it is a popular destination both summer and winter.  You’ll need to book with the ACC well in advance if you want to stay there.

The powerline trail running over Elk Pass from Peter Lougheed Park has long been popular with cyclists, and now that it has been designated as part of the Trans Canada Trail, one can only imagine the increase in use.

But if you hike southwest beyond Upper Elk Lake towards Pétain Falls and beyond, wilderness camping is allowed and no fees are charged. Or if you’re up for a long but relatively undemanding 20 to 25-km hike, you can easily visit both lakes from the Peter Lougheed trailhead and return in a day.

Once the season gets started, you can check the Elk Lakes Trail Report for latest conditions. 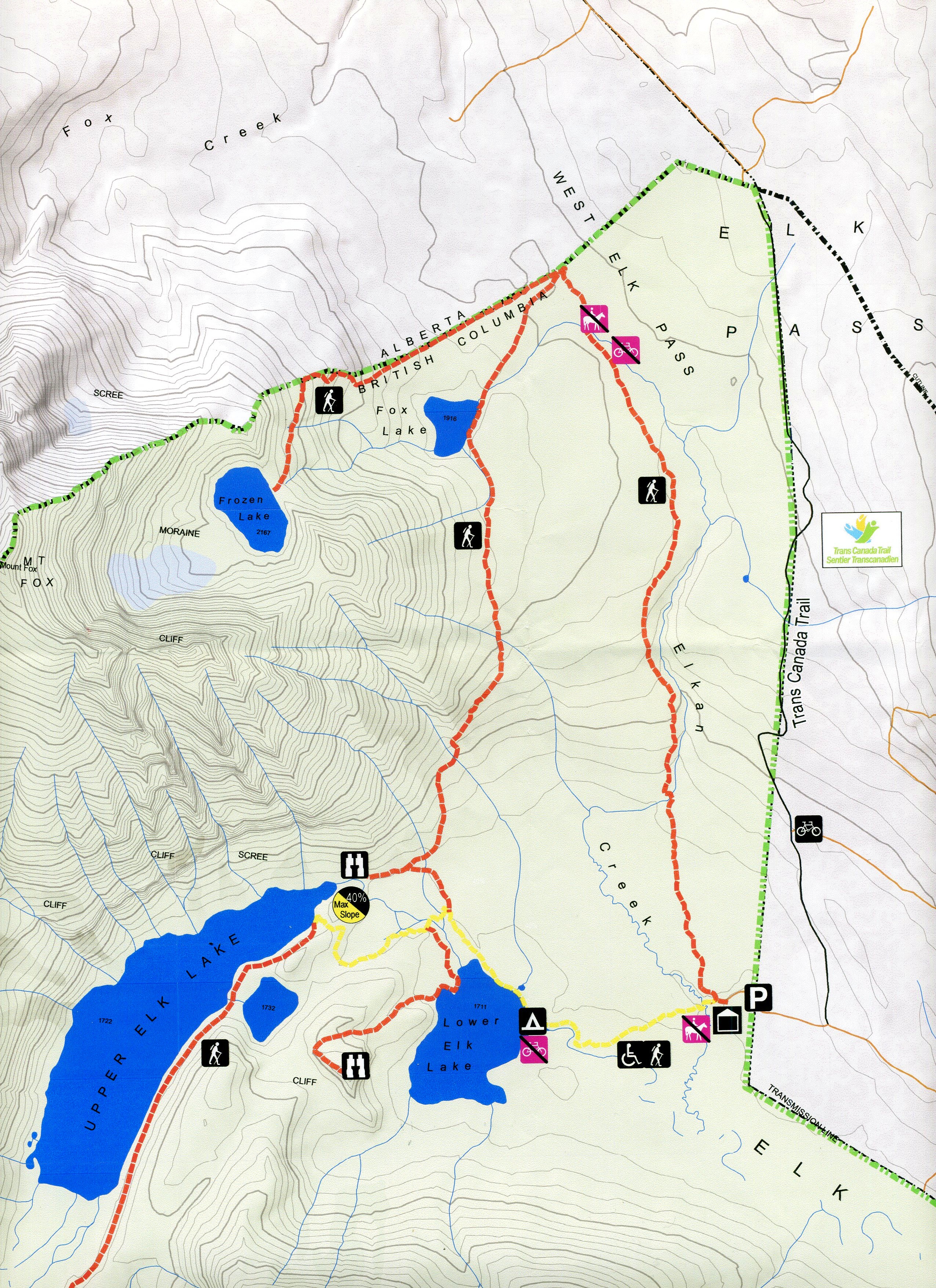 BC Parks new map for Elk Lakes displays the revised trail system in the park’s core. The yellow trail running from the east park entrance to the lower and upper lakes is now wheelchair accessible, though it crosses a ridge between the two lakes that will be “difficult” for wheelchairs. (This map does not show trails from Alberta and Peter Lougheed Park that connect to the West Elk Pass, Elkan Creek and Trans Canada Trail .)