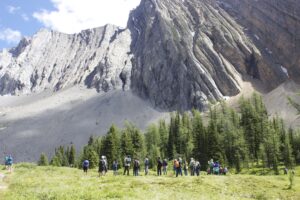 A horde of hikers gather 100m short of Chester Lake on Sunday to observe a grizzly bear digging for ground squirrels beside the trail (just out of sight to the left). Less than an hour later a Park Ranger arrived to close the trail and sweep the last of over 100 hikers back to the parking lot on Smith-Dorrien Summit. Brian Patton photo.

A grizzly bear moved into the Chester Lake cirque in Peter Lougheed Provincial Park on Sunday (July 19), resulting in the indefinite closure of that trail. It was a prime example of what happens when too many people wander into a grizzly’s dining room, and we were there to witness it.

I have a few hard and fast rules when it comes to hiking, and one of them is: “Never hike in Kananaskis Country on a weekend.” I know that will shock many folks since K-Country is dearly loved by tens of thousands of people from Calgary and region. But therein lies the problem: thousands of K-Country lovers stream into this recreation area every weekend to hike the trails, making the backcountry much busier than that of nearby Banff National Park.

Nonetheless, I wanted to check out Chester Lake to examine flood-damage repairs at the trailhead and remeasure and photograph the trail for the next edition of the Canadian Rockies Trail Guide. And Sunday was my only opportunity to do it.

With more than 50 vehicles in the trailhead parking lot when we set off shortly before noon, we realized this wasn’t going to be a wilderness experience. Groups of hikers were streaming by in both directions as we made the climb to the meadows.  And some of those coming down warned of a grizzly feeding by the trail just before the lake.

We got to within sight of the lake and saw the grizzly digging beside the trail. Dozens of hikers inched closer to the bear trying to get photos. Others skirted it as they travelled to and from the lake. And two barefoot hikers in bathing suits with a free-running dog were heading straight into the fray. I took a couple quick photos of the mayhem, and we turned for home.

On the way back we passed a Park Ranger, who had just closed the trail at the parking area and was heading up to herd hikers. Then we were back to the car and bouncing down the dust-choked Smith-Dorrien Road to Canmore in a bumper-to-bumper procession.

“Having made extraordinary gains in the public’s estimation in the last century, wilderness could well be loved to death in the next.” Roderick Nash, Wilderness and the American Mind, 1981.