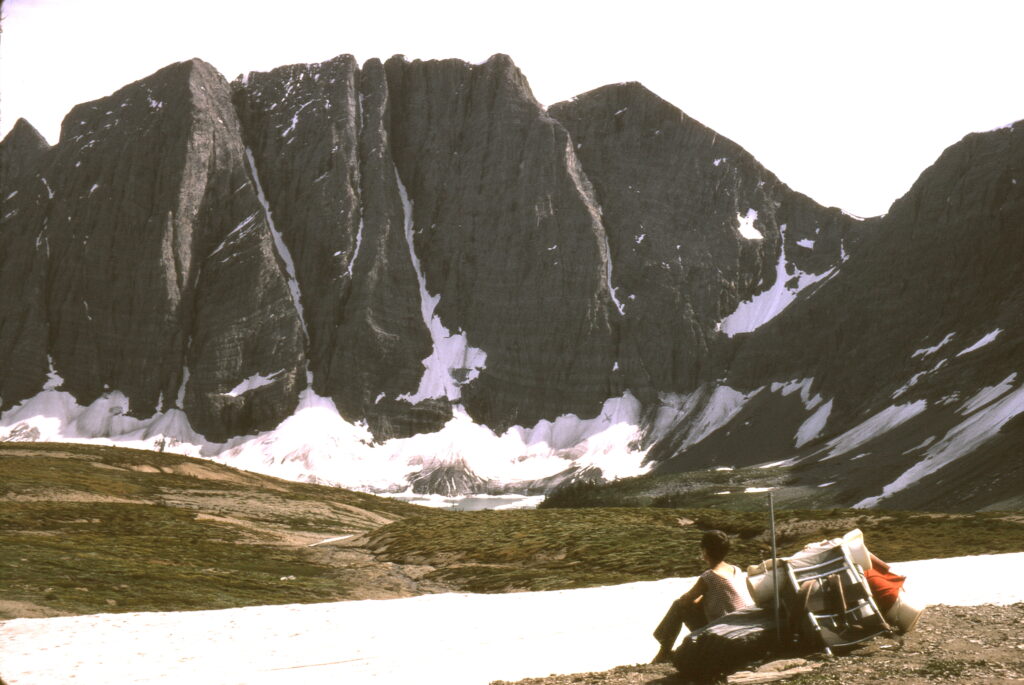 As snow melted out in the high country, we headed off to measure and photograph the Rockwall Trail. Floe Lake from Numa Pass on July 6, 1970.

Kootenay National Park is celebrating its centennial with a “Kootenay Then and Now: Recreate the Photo” contest. Since we began our fieldwork on the Mountain Parks’ first comprehensive trail guide 50 years ago, I thought it would be appropriate to reminisce by publishing a few photos from that long-ago summer of 1970.

That June we began hiking Kootenay’s trails, most for the first time. Measuring with a trail wheel and photographing for the first edition of the Canadian Rockies Trail Guide, which would be released a year later.

In addition to providing accurate measurements for the park’s trails, photographs allowed hikers and backpackers to view images of many backcountry destinations for the first time.

Those photographs were reproduced in the trail guide in black & white (and still are), but these early images are presented in colour here.

Kaufmann Lake at the head of Tokumm Creek was one of the few overnight destinations in Kootenay in the 1970s other than the Rockwall. But the wildfire that swept the valley in 2003 destroyed much of the trail. Today, the final section of trail to the lake is overgrown and the campground is gone.

A bit of Kootenay hiking history

Planning for fieldwork on the Canadian Rockies Trail Guide began during the winter of 1969-70 with letters sent to all Park Superintendents. Kootenay’s Superintendent put us in touch with Kurt Seel and pioneer naturalist Ian Jack. We met with Kurt and Ian at Park Headquarters at Radium in early June. After receiving their advice and approval for our project, we set off to document the Juniper Trail and other lower elevation trails.

After that initial visit, we were off to do the same in other parks. As snow disappeared from higher trails in early July, we returned to measure the Rockwall and loftier day hikes. Less popular trails were measured and photographed over the next couple years and published in the CRTG‘s second edition.

One of the memories from those early days was hardly ever encountering anyone on the trails. And we had all the campgrounds on the Rockwall Trail to ourselves.

Following are a few photos from the summer of 1970. If you have any old photos from Kootenay Park trails (even older than ours), send them to oromaniacs@gmail.com and we’ll publish them in a future posting. 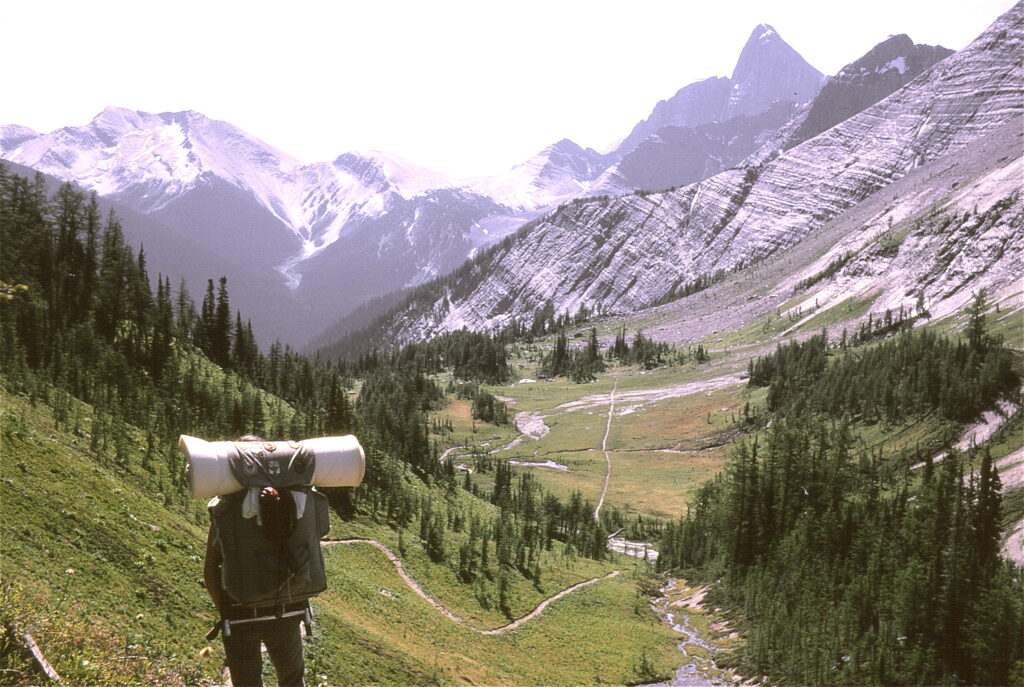 “The trail goes ever on”… The shot from Tumbling Pass on the Rockwall Trail taken on July 6, 1970, and used for the first cover of the Canadian Rockies Trail Guide. 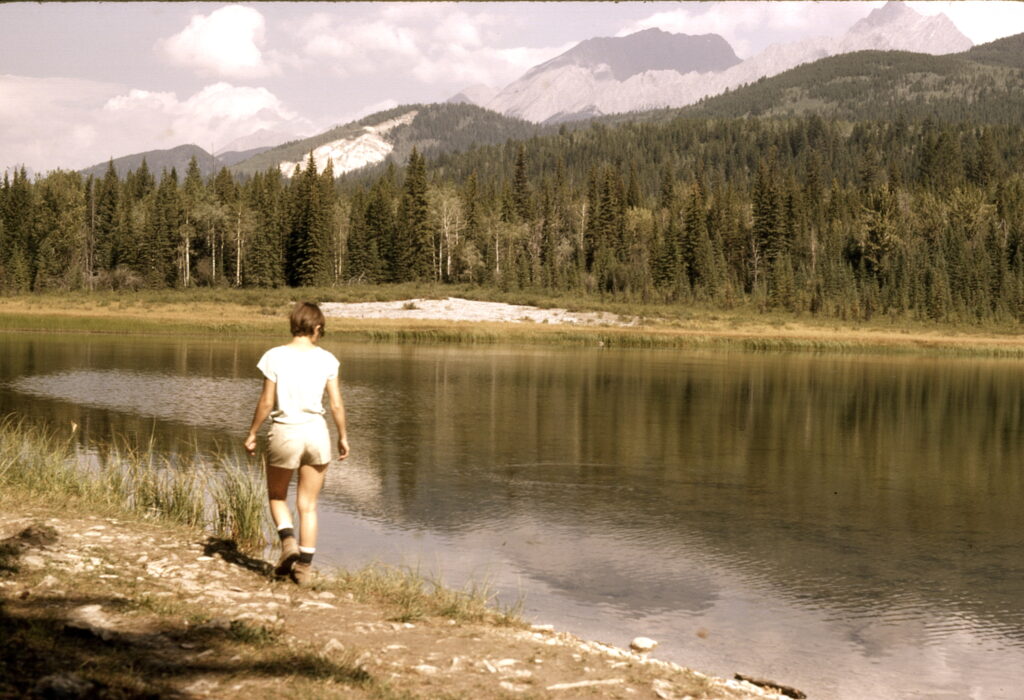 Dog Lake (top) and Stanley Glacier (below), both hiked and measured by Bart Robinson in 1970 and photographed by Brian Patton on August 29, 1971. 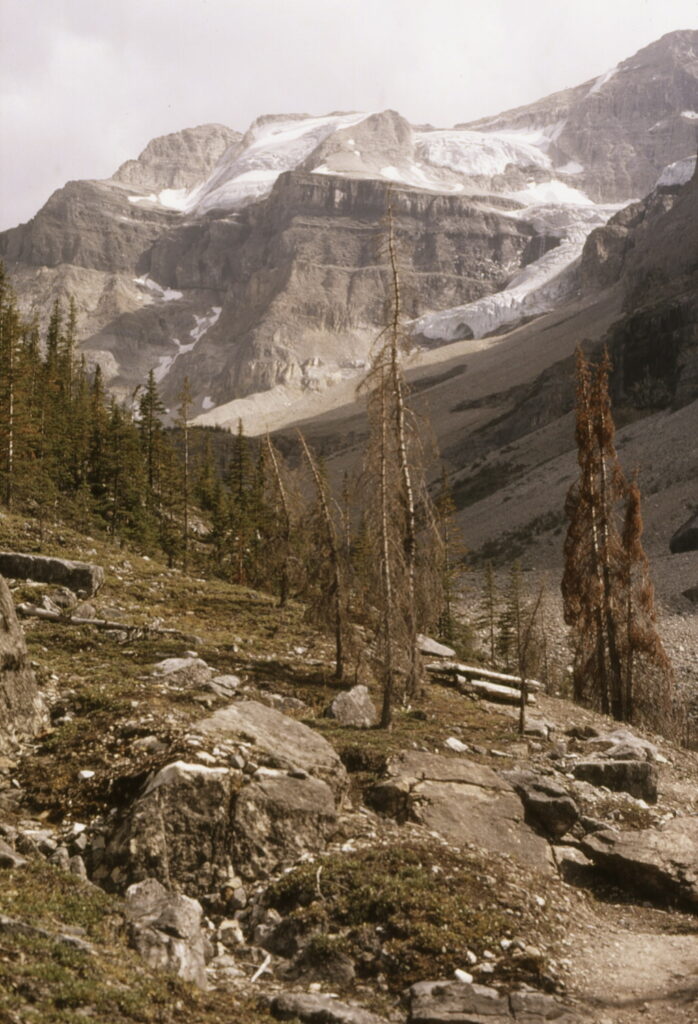 All photos by Brian Patton