Larch Valley Hike: On the Busiest Day of the Year

Although the hiking season is generally spent trying to avoid the crowds,  today we headed up to do the Larch Valley Hike on what is surely the busiest day of the year. This was due to a combination of factors: late September (with larch trees at their golden best), a favourable weather report, and a Sunday.

The free shuttle set up by Parks Canada to transport hikers from the Lake Louise Overflow Campground to Moraine Lake has been running each weekend through September, but our plan was to head up early to beat the crowds on both the access road and trail:

7 a.m. – Speed limit reduce to 70 km/hour at the shuttle departure area along the Trans-Canada Highway – but this didn’t seem to slow any vehicles down

7:30 a.m. – Still darkish in the parking lot. Around 30 vehicles already there, with many of their occupants up on the Rockpile taking photos

8 a.m. – A few arriving parties preparing to set out from the parking lot

Looking across to the Valley of the Ten Peaks from one of the upper Minnestimma Lakes.

8:45 a.m. – The first rays of direct sunlight (and warmth) hit the trail near Eiffel Lake junction

9:30 a.m.  – We reach the end of the Larch Valley Trail. Everyone in front of us  – maybe a dozen hikers – are continuing to Sentinel Pass

10 a.m. – As we start the return trip, we start meeting groups everyone few hundred metres

10:30 am – Crowds have really picked up by the time we reach the lower meadows. Lots of families with young children

11 a.m. – By the time we make our way down the switchbacks, we are going against an almost continuous line of people ranging from those in full snowsuits (it wasn’t that cold!) to a “hiker” in a business suit and shoes to match

11:45 a.m. – We don’t pass a single vehicle on the outward journey along Moraine Lake Road. We drive around the road closure (in place since around 10 a.m. according to a Banff family we passed on the trail), where only the shuttles, tour buses, Moraine Lake Lodge guests, and drivers with disabled privileges are permitted to proceed.

11:50 a.m. – traffic control at both 4-way intersections in Lakes Louise, but the volume of vehicles doesn’t seem to warrant this.

These final observations are very different to 2012 and previous years. The shuttle operated by Parks Canada since 2013 has definitely made a  huge difference to congestion along Moraine Lake Road. According to a Banff family we bumped into on the trail, at around 10 a.m. they were among the last to be let through before the road closed to the general public. 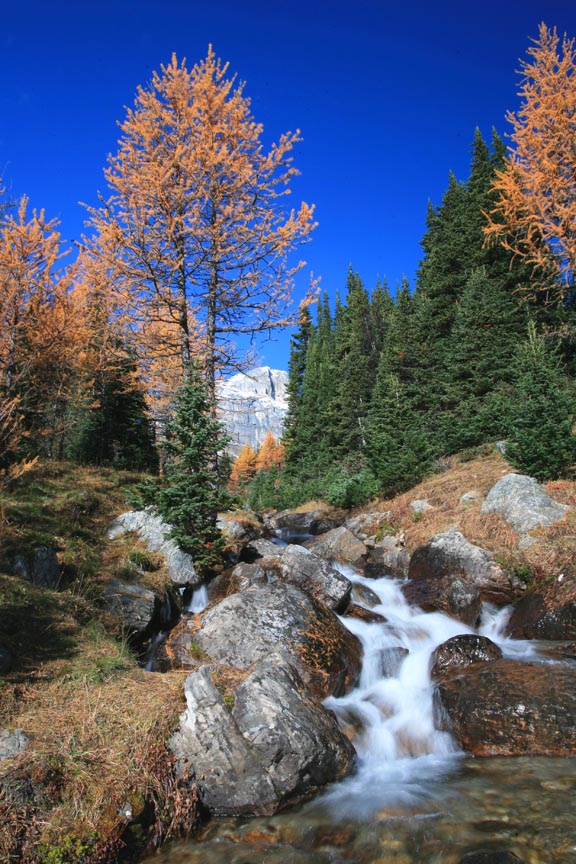 With a little bit of extra walking, there are places of solitude in Larch Valley during the busy fall hiking season.

On the day we visited, Parks Canada implemented the road closure at exactly the right time – the parking lot was full and only a few cars were parked back along the road.

The trail wasn’t as busy as expected. With access limited to shuttle bus access after 10 a.m., there are simply less people able to access the Moraine Lake area.

I was surprised how many people were ignoring the Group Access requirement that legally requires hikers “to travel in a tight group of four or more.”

Lots of Banff families on the trail. Despite the fact that Parks Canada has been actively been promoting alternate locations for larch viewing, there is simply nowhere in Banff National Park where the phenomena of golden larch is more accessible (unless you count the smattering of larch at the top of the Lake Louise Gondola).

During the larch season (last two weeks of September), plan on getting to Moraine Lake before 9 a.m. and you should be able to find a parking spot. If you arrive before 8 a.m., you’ll be among the first on the trail. Too early to hike? Find yourself a parking spot before the crowds arrive and then enjoy coffee and muffins or breakfast at Moraine Lake Lodge.