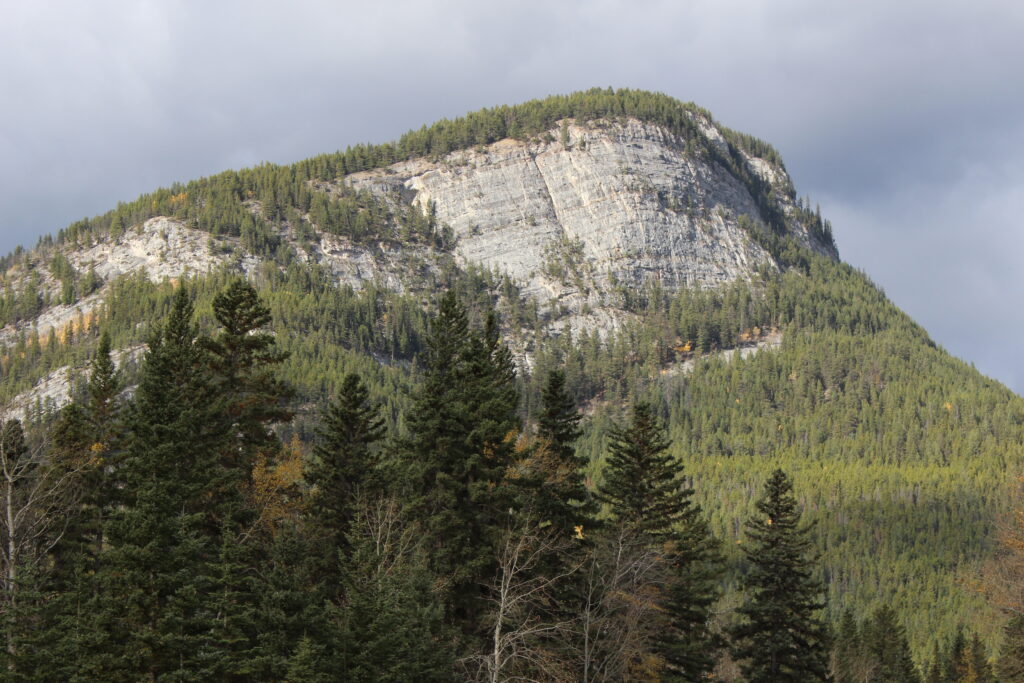 Stoney Squaw, Tunnel Mountain, Mount Eisenhower, Chinaman’s Peak. Some of the most popular short-hike destinations in the Bow Valley that experienced name changes over the past 40 years or may do so soon.

I can’t remember the first time I hiked the 2-km trail to the summit of Stoney Squaw. Undoubtedly, it was during my first summer in Banff. I know I hiked it at least a dozen times when I lived in the Bow Valley.

The peak is actually just a rocky ridge extending from Mt. Norquay. From certain angles it looks like a distinct summit, from others a rather nondescript forested ridge.

The trailhead is located at the entrance to Mount Norquay’s main parking area. It is a nice forest walk but, with the exception of a close-up view of Cascade Mountain’s south face from the top, views are unremarkable.

I remember hearing the story behind the name during my early days in the valley and wondering if it was accurate. Maybe it was just a colourful tale conjured up by early Banffites for the benefit of the tourists.

I have since discovered the original reference in Ernest Ingersoll’s 1892 Canadian Guide Book. Ingersoll claims the mountain takes its name “from the traditional story that some years ago a brave old Assiniboine woman sustained her husband, who lay sick for several months in their lodge at its base, by hunting upon its top and sides, where there are open glades which still form favourite spring feeding-places for the big-horn or mountain sheep.”

With such an early reference, I’m convinced the name honours an actual event that may predate the completion of the Canadian Pacific Railway. So apparently was the Geographical Names Board of Canada, which made the name official in 1922.

But use of the name “squaw” fell out of favour in recent years. As a result, Parks Canada took it upon itself to tape over “Squaw” on the trailhead sign in mid-September. Parks now refers to the trail as “Stoney Lookout.” Online trail sites are following its lead and using “Stoney Lookout.”

However, maps still display “Stoney Squaw” and likely will for years to come. There are rumours leaders of the Stoney Nation are currently studying the matter and exploring optional names that won’t be considered misogynistic or derogatory. Perhaps something in the Stoney Nakota language.

Parks Canada’s rush to political correctness was a bit presumptuous. Without an official renaming of the peak, the story will likely be lost and the name could revert from “Stoney Lookout” to  “Stony Lookout”—just another rocky viewpoint.

The valley of many names

There have been numerous name changes for trail destinations and natural features in the Bow Valley since we published the first edition of the Canadian Rockies Trail Guide. Following are some popular hikes, mostly short trips, that have a mixed naming history:

This is a favourite 3.8 km hike leading to a panoramic view of the Bow Valley. I’ve hiked it at least 11 times, usually early in the season when other high, viewpoint trails are still snow-covered.

The viewpoint takes its name from James Hector’s naming of Castle Mountain during his explorations in 1858. Hector was a geologist and the mountain’s castellated structure reminded him of European castles.

It was still Castle Mountain when a fire lookout and trail were built on its slopes in 1942. But following World War II, Canada’s Prime Minister Mackenzie King had it renamed Mount Eisenhower to honour Dwight D. Eisenhower, commander of Allied Forces during the conflict.

Many Canadians were upset by the name change, especially when they discovered the story behind it. After Eisenhower was awarded a castle in Scotland following war’s end, Mackenzie King was said to proclaim “We’ll give him a bigger castle!” (Frivolous, indeed.) 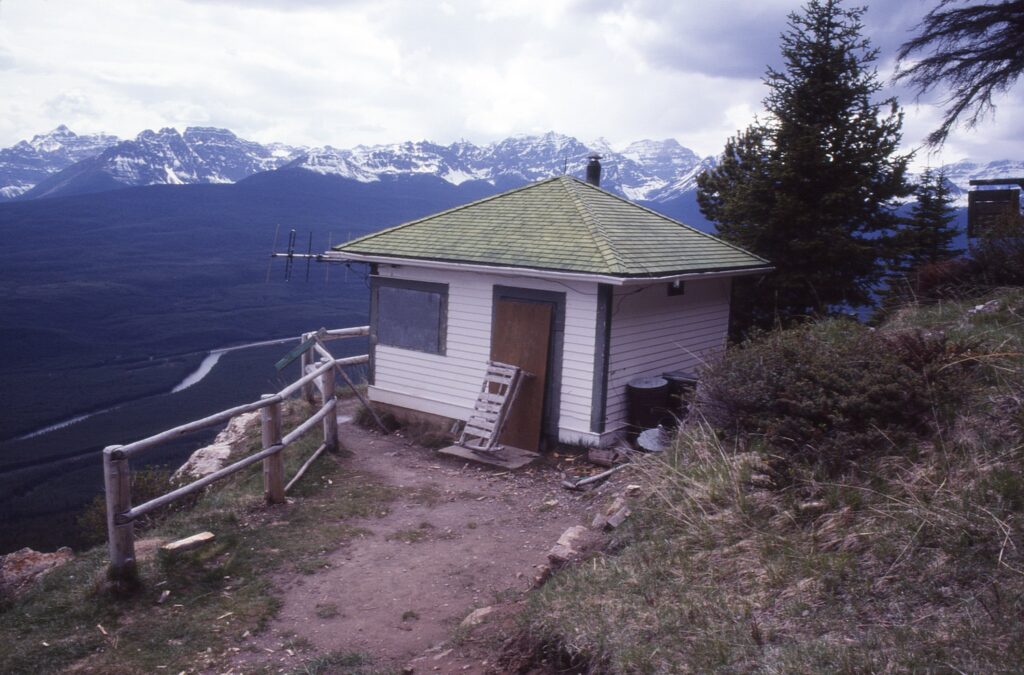 Abandoned Eisenhower Lookout cabin photographed in June, 1983, just weeks before it  burned to the ground.

When we published the first edition of the Canadian Rockies Trail Guide, Mount Eisenhower was still the peak’s official name, and the still-active fire lookout at trail’s end was Eisenhower Lookout. Parks Canada closed the cabin and its fire lookout program in the mid-1970s. The cabin was destroyed by fire in 1983, apparently accidentally by passing hikers.

Due to pressure from local residents, the peak was renamed Castle Mountain in 1979. We adopted Parks Canada’s “Castle Crags” name for the third edition of our trail guide but still referred to the destination as “the old Eisenhower Lookout site.” In the 5th edition of the guide, we simply referred to the trail as “Castle Lookout.”

This 2.3-km trail running from the Town of Banff to the mountain summit is undoubtedly the most popular hike in the Bow Valley. Though it is hardly a mountain, the 1690-m summit provides some fine views over Banff and the Bow Valley.

After checking my records, I believe I’ve hiked the trail to Tunnel Mountain’s summit 31 times. Not really a lot for someone who lived in its vicinity for over 30 years. And certainly not nearly as much as my Banff neighbour Anne Ness, who is credited with hiking the trail more than 8,000 times over 40 years.

Most people who hike the mountain know how it got its name. How a preliminary survey for the Canadian Pacific Railway in 1881 proposed a tunnel be built through the mountain. A later surveyor charted a route north of the mountain along the Cascade River that eliminated the cost and construction delays of the tunnel. But the name Tunnel Mountain remained and has survived for over 130 years. 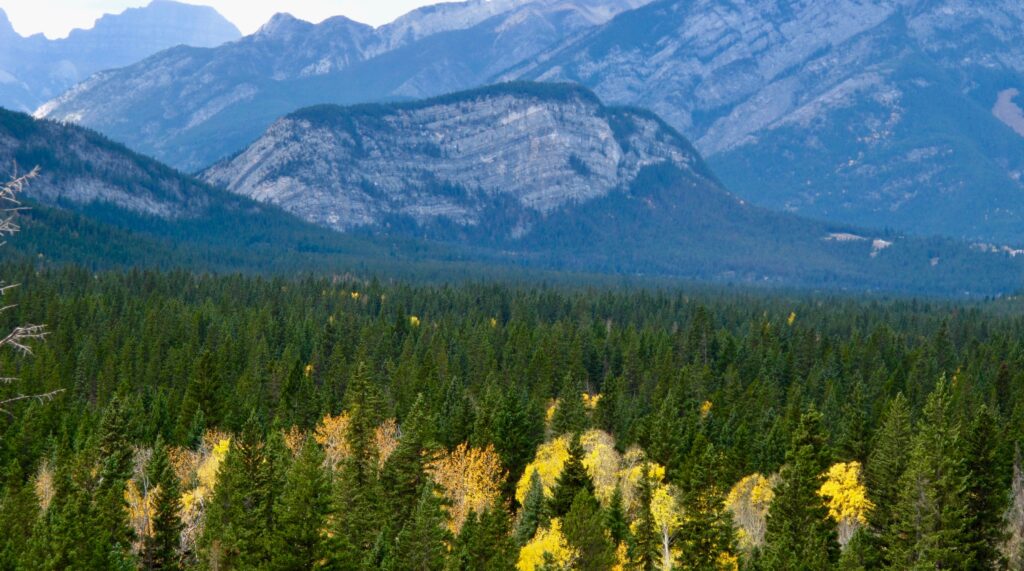 Tunnel Mountain as seen from the east at Valleyview Picnic Area. From this angle, the mountain has always reminded people of a reclining buffalo.

Alternate names have been proposed for this miniature mountain for several decades. The most prominent is Sleeping Buffalo, or Iinii Istako as it was apparently known to the Blackfoot before the arrival of European fur traders. The name seemed appropriate to many residents of the Bow Valley, Native and non-native, since it looks like a resting buffalo when viewed from the east

In September 2016, the Stoney Nakoda tribe suggested an alternate name, Sacred Buffalo Guardian Mountain. While not a traditional Native name, Stoney elders believe it “best capture(s) the meaning of the culturally and spiritually important place.” The name was subsequently presented to the Geographical Names Board of Canada as an official replacement to Tunnel Mountain, but no ruling has been brought forth.

If the Stoney name is approved, it would be the longest name for the lowest mountain in the Canadian Rockies. On the other hand, Sleeping Buffalo has a long tradition with the Blackfoot and other Plains tribes. I would vote for it, or Iinii Istako in the Blackfoot tongue.

I recall when Banff poet-historian Jon Whyte first told me he had discovered the name for the man who first climbed Chinaman’s Peak above Canmore. The story appeared in the October 22, 1896 edition of the Medicine Hat News and described how a Chinese cook named Ha Ling had made the ascent and planted a flag on its summit that could be seen from the town of Canmore.

Jon subsequently published a column in the June 1, 1977 issue of the Banff Crag & Canyon that referenced the Medicine Hat story. Noting that Chinaman is a derogatory and racist term, he suggested the peak should be renamed since we know the name of the man who climbed it.

Though I observed the peak most every day for nearly two decades when I lived in Harvie Heights and Canmore , I didn’t get around to hiking the sketchy trail to its summit until October 1993. It was still called Chinaman’s Peak then. But moves were already afoot to have it officially renamed Ha Ling, which it was in 1997.

The steep 4-km trail to the top of Ha Ling is much improved since my ascent, aided by wooden staircases and chain handrails. Though it is still a stiff climb, it is one of the most popular half-day hikes in the Canmore vicinity. 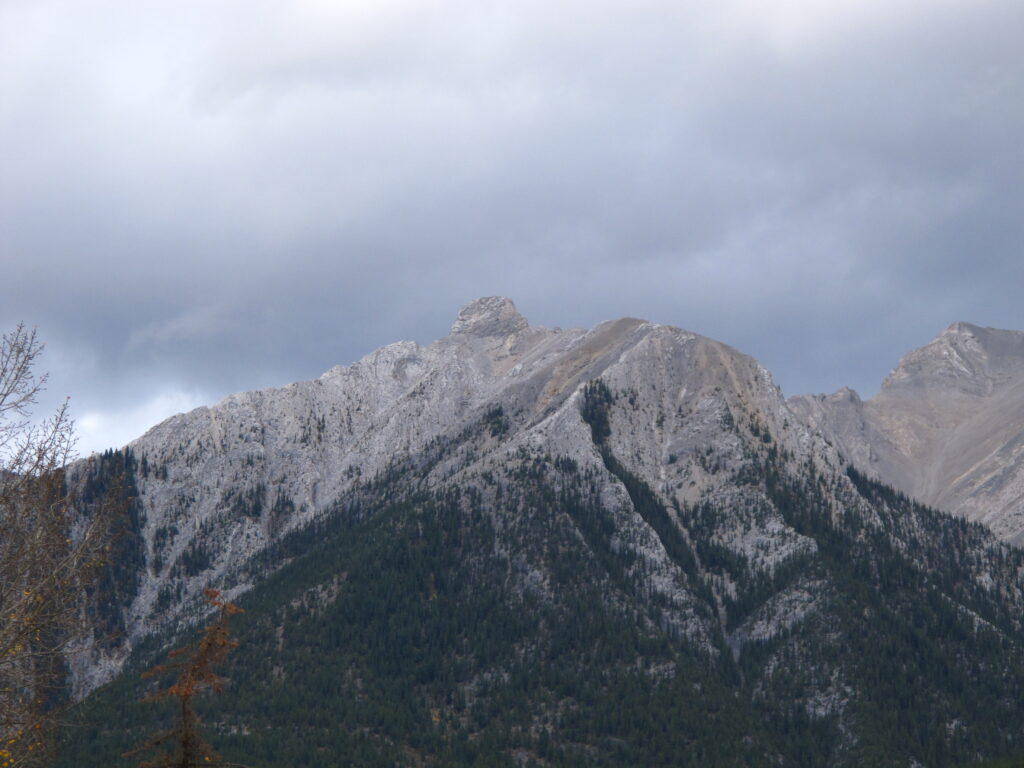 I don’t know who came up with the name Squaw’s Tit for the distinctively-shaped peak that sits below Mount Charles Stewart. It was always an unofficial, local name, perhaps coined by someone in Canmore who worked alongside “Bohunks” and “Wops” in the mines. (derogatory names were commonplace in those days).

Though there was never a trail to its summit, I did hike and jog a number of trails on its lower slopes when I lived at its base in Harvie Heights. We seldom referred to the mountain, but when we did it was always Squaw’s Tit.

In 1980, on the occasion of the Province of Alberta’s 75th birthday, a local landscape photographer was commissioned to photograph Mount Princess Margaret. That peak is just inside the boundary of Banff Park, but he mistakenly photographed Squaw’s Tit. The framed print was sent as a present to Princess Margaret in London. Imagine the photographer’s embarrassment when he learned of his error. (No one ever had the courage to inform Princess Margaret of the blunder or of the peak’s nickname.)

With the help of Stoney Nakoda elders, the mountain finally received an official name. Bald Eagle Peak was formally anointed by valley residents and members of the Stoney Nation at a ceremony held in Canmore on September 25.

I don’t have a chance to hike many of these short Bow Valley trails since I moved across the divide. But when we came to Banff on a short visit in October, I thought it might be appropriate to hike the-soon-to-be-renamed Stoney Squaw. But, alas, all I had time to do was take the photo that precedes this post.

I suppose I should hike the trail again for old time’s sake once the mountain gets a new, more acceptable name. (I won’t hike it if it remains Stoney Lookout.) In the end, we should realize that every generation has different sensibilities. The rough, sometimes racist “white folks” who settled the Bow Valley wouldn’t have much in common with today’s residents.

All photos by Brian Patton