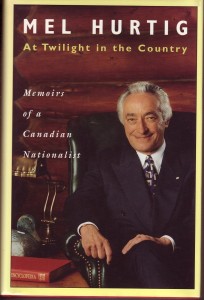 Mel Hurtig recalled his many accomplishments as a pioneer bookseller, publisher and Canadian nationalist in his autobiography At Twilight in the Country (Stoddart Books). His wife Kay also forced him to include an account of one of the most infamous hikes in the history of the Rockies.

Mel Hurtig passed away last week at age 84 after a brief illness, and a myriad of articles have been published across Canada lauding his achievements and devotion to Canada. But I also remember him as a friend and an enthusiastic walker who loved the mountains of western Canada.

Mel was always an active golfer, but after he married Kay Studer in 1981, he became a very serious hiker. He frequently called me for hiking recommendations, and that is how I played a role in one of the most infamous trips ever completed in the Canadian Rockies.

After suggesting that he and Kay try Lake O’Hara Lodge as a base for some excellent day hikes, he called back with ecstatic reviews. “Brian, that was wonderful! Are there any other lodges like Lake O’Hara you could recommend?”

I thought for a moment and said that Skoki Lodge would offer similar amenities with good day trips. Since he owned a copy of the Canadian Rockies Trail Guide, I assumed he would read the trail description and plan his trip accordingly. I was wrong.

Along with Kay and daughter Leslie, Mel set off for Skoki Lodge in the Temple shuttle bus. But you can imagine their surprise when the bus didn’t drop them off in front of the lodge but at a trailhead 10.5-km short of their destination. Undeterred, they set off for Skoki lugging one large, overstuffed suitcase.

They lumbered along with their heavy burden as best they could into the Corral Creek meadows and up the switchbacks to Boulder Pass. But unfortunately, Mel hadn’t brought a copy of the trail guide or a map, so when they got to the Deception Pass junction, they kept going straight to Baker Lake and onto the trail around the backside of Fossil Mountain.

As daylight was fading, they reached another crucial junction in Cotton Grass Pass and missed another trail leading to the lodge. Somehow, they finally got back on the correct trail and reached the lodge around sundown. As described in his autobiography: “When we got to the lodge, the people there couldn’t believe what they saw—three exhausted people and one big bloody heavy suitcase.”

After three days of pleasant hiking around Skoki, they headed back out with their suitcase and immediately became lost again. I’ve never been able to piece together how they got lost on this popular trail or the route they took, but somehow they spent the entire day slogging up steep scree slopes and across trail-less alpine terrain with the suitcase, and dreading an encounter with a grizzly bear that was reported in the area. Eventually, as darkness was falling, they found the Temple access road and staggered down the final 4 kms to their car.

Mel did most of his serious hiking after he turned 50. Though he never mentioned the Skoki fiasco until many years later, he often called to report on his latest marathon day trips—Berg Lake and return, Assiniboine Lodge to Mt Shark, O’Hara to Lake Louise via Abbot Pass. And inevitably, after describing each trip, he would ask, “Is that good, Brian?” And I would reply, “Yes, that’s very good, Mel.”

But I think his Skoki trip will always be the most memorable. Over 30 kms with a suitcase, a record that will never be equalled, I’m sure.