Reopening the back door to Mt Assiniboine 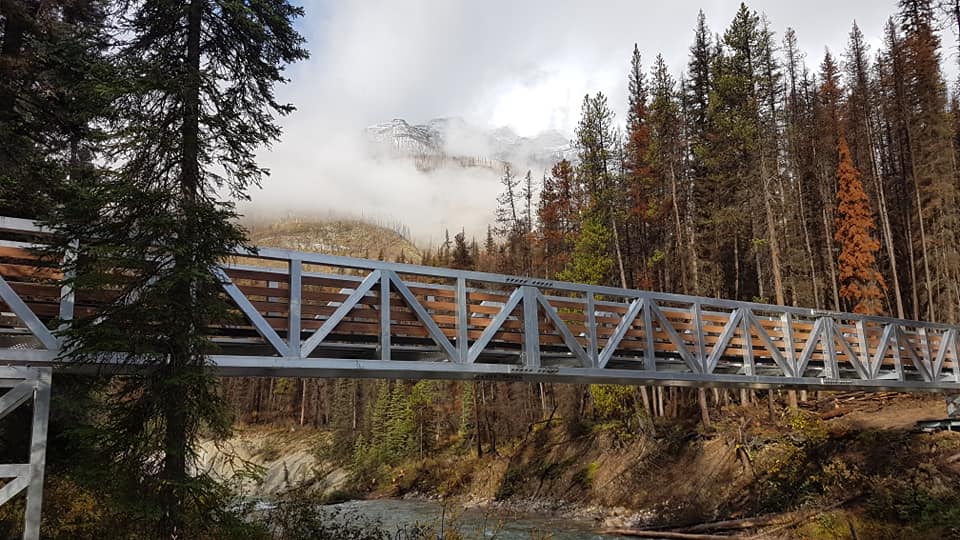 A new aluminum bridge spanning the Simpson River to the Surprise Creek trail renews access to one of Mount Assiniboine Park’s most remote valleys. Photo courtesy of Ethan Baltrus/Mountaineer Woodworks.

Cut off by a collapsed suspension bridge in 2016 and devastation from the 2017 Verdant Creek Wildfire, the Simpson River-Surprise Creek-Ferro Pass route into Mount Assiniboine Provincial Park has been restored thanks to a new bridge and trail clearing up the charred Surprise Creek valley.

The 32-km trail from Kootenay National Park into the heart of Mt Assiniboine Provincial Park has never been the most popular route into one of British Columbia’s oldest and most celebrated provincial parks.

Most people backpacking to Mount Assiniboine’s core at Lake Magog travel from Alberta, via either the Bryant Creek or Sunshine Village-Citadel Pass trails. Others fly by helicopter from Canmore or Mount Shark. Either way, access is shorter and faster.

However, Simpson River-Surprise Creek-Ferro Pass is the only maintained trail originating in B.C. While the route is significantly longer than those from Alberta, it provides more of a wilderness experience and unique scenic rewards.

Most backpackers who hike the entire trail use it on their departure from Lake Magog (starting at Magog’s 2165m elevation and finishing up at 1250m in Kootenay Park).

But even more people hike the relatively flat 11.5-km trail from the Kootenay Park trailhead to the Surprise Creek campground and shelter. They overnight there and return the way they came.

The trail up the Simpson River to Surprise Creek has suffered a few indignities since we first measured it for the 2nd edition of the Canadian Rockies Trail Guide. It was lush and green in those days. But the Mount Shanks Fire in 2001 scorched most of the route and there has been little regrowth since then.

Expect open views and trail that is a bit sloppy in spots as you make your way east into Mount Assiniboine Provincial Park and to the confluence of the Simpson and Surprise Creek at km 10.9.

The old suspension bridge spanned the Simpson River to the Surprise Creek Campground and shelter cabin at this point. However, it collapsed in 2016 and BC Parks removed the wreckage soon after.

You’ll have to hike another 200 to 300 m further upstream to find a new aluminum footbridge over the Simpson (constructed in early autumn 2019).  Then you’ll hike back downstream to the campground and shelter, adding an extra 500m to the trip.

Both the campground and cabin were spared from both the Mount Shanks and Verdant Creek (2017) fires— a little patch of forest green sandwiched between two charred landscapes.

The shelter cabin at Surprise Creek has an interesting history. Hunting has been allowed on the upper Simpson River since Assiniboine Park’s earliest days.

Pioneer Columbia Valley outfitter Walter Nixon held the license to the upper Simpson guide block until his death in 1952. Albert Cooper, one of his guides, purchased the license from his widow and ran fall trophy game hunts (mostly sheep) in the area until 1996.

While Nixon and Cooper operated out of the Policemen’s Meadows cabins at the headwaters of the Simpson, Cooper built the Surprise Creek Cabin in the 1960s. An agreement with BC Parks allowed him to use the cabin in the fall for hunting so long as hikers could use it as a shelter during the summer.

The crew who flew in to construct the new Simpson River bridge in the fall of 2019 also refurbished the cabin, including a new roof, floors and door.

The cabin remains locked during the summer of 2020 due to coronavirus concerns. 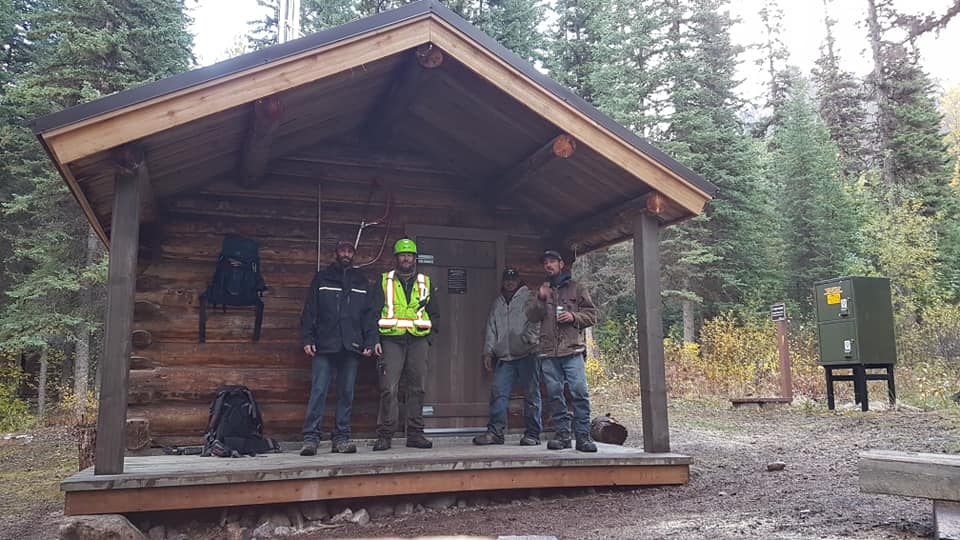 Ethan Baltrus (left) and fellow crew members from Invermere following restoration of the Surprise Creek Cabin in October 2019. Unfortunately, Ethan’s deluxe cabin door remains locked during the 2020 hiking season due to coronavirus. However, the campground is open (note food locker on the right.) Photo courtesy of Ethan Baltrus/ Mountaineer Woodworks.

Detail from the Gem Trek Banff-Mt Assiniboine map shows the first 11 kms of trail leading east from Highway 93 in Kootenay Park to Surprise Creek Campground and Cabin. A revised map (currently in production) will show the rerouting of the Simpson River trail to the new aluminum bridge 200m north of the old suspension bridge crossing.