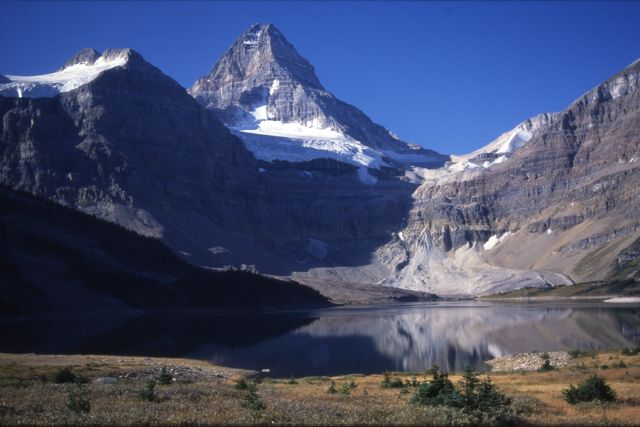 The core area of Mount Assiniboine Provincial Park has long been one of the most popular backcountry destinations in the Canadian Rockies. So much so that the first-come, first-served access to Lake Magog and Og Lake Campgrounds is no longer feasible. A new reservation system will be available starting  April 10, requiring campers to reserve sites at these campgrounds for overnights between June 26 and September 30.  Photo © Brian Patton.

Assiniboine Provincial Park visitation has increased steadily over the past several years, prompting one backpacking friend of ours to refer to the summer camping scene at Magog Lake as “Burning Man in the Mountains.” While clearly hyperbole, the comparison does point to a growing problem: how do you maintain order when you have more campers than campsites queued up at a first-come, first-served campground 20-plus kilometres from the nearest trailhead?

The obvious first solution is to swap out the old first-come, first-served system with a shiny new online reservation system . . . which is exactly what the park is doing in 2018. Under the new policy, reservations will be required from June 26th to September 30th for the Magog Lake (29 sites) and Og Lake 9 (7 sites) campgrounds. (Before June 26th and after September 30th, campsite registration will be managed via on-site self-registration boxes.)

Starting at 7 am on April 10th – the day the new policy comes into effect – Assiniboine backpackers can make campground reservations up to four months in advance of their arrival date. The reservations can be made through the Discover Camping Reservation Service. Fees are $10.00 per person per night (16 and older) or $5.00 per person per night (6 – 15 years), plus an online booking fee. Park Rangers will be checking registrations, meaning campers will need to print them out and tuck them in their packs before hitting the trail.

While the new system should soothe some of the campground chaos, it will no doubt increase the hassle factor for hikers planning to access Assiniboine from Bryant Creek. With the old first-come, first-served system, hikers didn’t have to worry about reserving a campsite in Assiniboine Provincial Park, and it was relatively easy to reserve campsites in Banff National Park for the first night of the trip, going in, and the last night of the trip, coming back out. Now, hikers will have to use two separate online systems to coordinate date-specific reservations in both parks. While we won’t know how it will all turn out, we suspect anyone interested in booking an Assiniboine trip on a summer long weekend may want to take a Tylenol or two before turning on their computers.