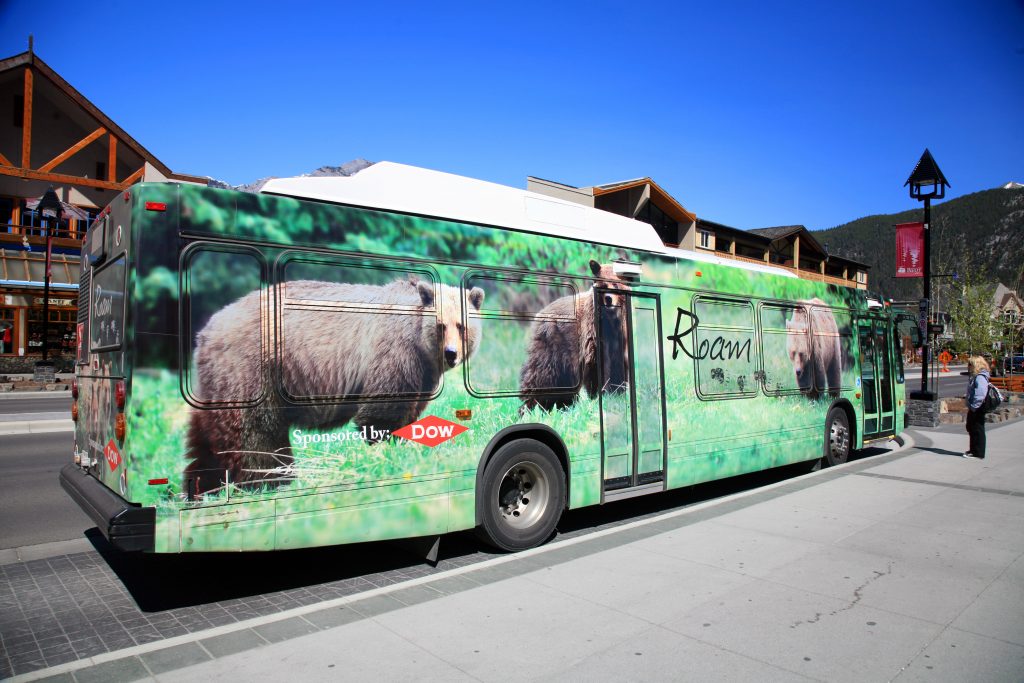 Bow Valley Regional Transit Services will once again provide Roam service from the Town of Banff to campgrounds and other destinations on the Lake Minnewanka loop for a nominal fee this summer. But this year Roam will be joined by an expanded fleet of free Parks Canada shuttles on the Minnewanka loop, between Banff and Lake Louise, and from the Lake Louise Overflow. Andrew Hempstead photo.

The expanded shuttle services, announced by Parks Canada on May 12, will serve not only general sightseers but also hikers looking to access trailheads around Banff, Lake Minnewanka, Lake Louise and, in the autumn, Moraine Lake.

There will also be a free shuttle running between the Banff train station and the Village of Lake Louise hourly between May 19 and October 10. Once you’re at the village, you can catch one of the shuttles to Lake Louise proper.

Of course, one of the big questions is where to leave your vehicle so you can take advantage of these shuttle services.

Parking is available free of charge in the large lot adjacent to Banff’s historic railway station at the northwest entrance to the town. This lot has been designated as a bus stop for shuttles running between Banff and Lake Louise and is a stop for Parks Canada and Roam buses operating on the Lake Minnewanka loop.

Lake Louise shuttles will start their regular scheduled runs (every 15 minutes) on May 19 from the Lake Louise Overflow parking lot 5.5 km east of Lake Louise on the Trans Canada Highway. That service, which includes pick-ups in the Village of Lake Louise,  lasts until September 10.

The Lake Louise Overflow lot will also be used for a Moraine Lake shuttle bus that runs from September 11 until October 9 (larch season).

Driving to Lake Louise this summer?

Still thinking about skipping the bus service and driving to Lake Louise? Then consider a recent advisory issued by Parks Canada, which states that flagging personnel will be stationed at the two four-way intersections in the Village of Lake Louise between 8am and 6pm every day from May 19 to October 9.

“Similar to last year, if it is determined that the upper parking lots by Lake Louise are full and there are too many cars on the side of the road, the flaggers will stop day traffic until there is parking space again.”

Driving to the lake before 9am and in the evening should be more feasible.

A free shuttle will be running from downtown Banff and the Juniper Lodge again this year from June 10 to October 9. While designed for patrons of the Norquay Scenic Chairlift, hikers bound for Stoney Squaw or Cascade Amphitheatre are encouraged to hop aboard (no booking required). Check the Norquay Shuttle Schedule.

Leaving the car at home?

If you live in Calgary, you will have the option of using a new shuttle service from Calgary to Banff on Saturdays, Sundays and holidays from mid-June until early September. A cooperative arrangement with the Calgary Regional Partnership, the Towns of Banff and Canmore, and Banff National Park will provide eight or nine runs a day and charge adult travellers $10 one way.

For information about all of these services, check Parks Canada’s “Alternative Transportation in Banff National Park for the 2017 Summer Season” . For the latest  on Roam bus services, which also include connections to Canmore, check out http://roamtransit.com/.