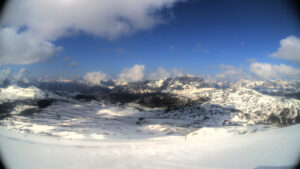 Sunshine Meadows overview from Canada’s highest webcam at the top of the Great Divide Chairlift at 2750m (9,022ft) on June 30, 2022. For current conditions link to https://www.skibanff.com/conditions.

Most hiking trails in the Sunshine Meadows are still snow-covered during the first two weeks of July.

Near record snow still blanketed the meadows on the Canada Day weekend. So much that the resort reopened the mountain to skiers during the July 1st weekend.

The ski resort recorded more than 900 metres of snow this season, the greatest amount in 65 years. 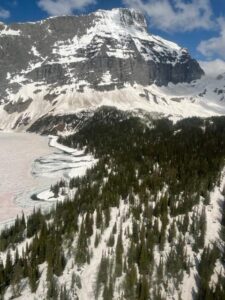 The Floe Lake Campground and the Rockwall Trail were still buried in snow in early July. Parks Canada closed the campground until July 15 and refunded all reservations for the first two weeks of the month. Parks Canada photos. 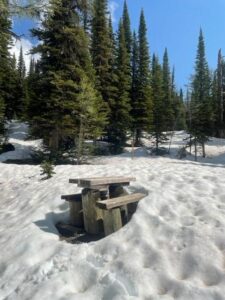 The situation for hikers at Sunshine Meadows is similar throughout the Mountain Parks. As one hiker reported this week, expect snow-covered trails above 1900 metres (6,200 feet).

That hasn’t discouraged over-zealous hikers from wading onto the snowy heights, like Kootenay Park’s Floe Lake and the Rockwall Trail. Parks Canada discourages early-season hiking when trails are still covered with snow and has closed the Floe Lake Campground until at least July 15.

Current trail reports are available on national and most provincial park websites (see links on our Trail Updates page).

Meanwhile back at Sunshine… 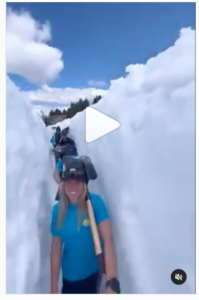