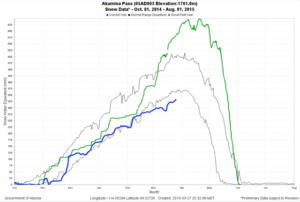 The snow profile at Akamina Pass on Waterton Park’s western boundary shows a much lower than average snowfall through this winter (blue line). This has been the case at most stations east of the Divide and south of Jasper. (click image to enlarge)

Normally during the first week of spring, I would be talking about another long winter coming to an end and looking towards the first hike of the season. This year is different, particularly in the southern half of the Canadian Rockies. A month ago I was hiking up a small mountain in the Sanford Range above the Columbia Valley on a snowfree, unfrozen trail. And little has changed since then.

Automatic snow pillow stations in the Mountain Parks show normal to above average snowfall in the Jasper Park region, but further south the snowpack is well below average and even threatens to set new records. The lack of snow even forced Castle Mountain Ski Resort south of Pincher Creek to close for the season on February 16.

Most stations from Skoki south recorded a blip in late November that pushed snowpack up to normal levels. But after that, snowfall was below normal, the result of a continental pattern that saw the east buried while the west basked.

Despite all this, I won’t make any predictions for an early hiking season except for the western slope (the Columbia Valley and the westernmost trails of Yoho and Kootenay Parks). Records show that the southern Rockies and Foothills usually get much of their winter snow in April and early May.

If you’re interested in looking at this winter’s snowfall, check out my posting for February 29, 2014, Snowpack in the high country. In addition to explaining what an automatic snow pillow station is, there are links to seven stations along the Divide in both Alberta and British Columbia. These links will take you to snow profiles for this winter.