Wildflowers and wood ticks: Spring hikes in the Mountain Parks

Stretching your legs for another hiking season starts now. Here are some favourite early trips that virtually guarantee wildflowers and wood ticks. 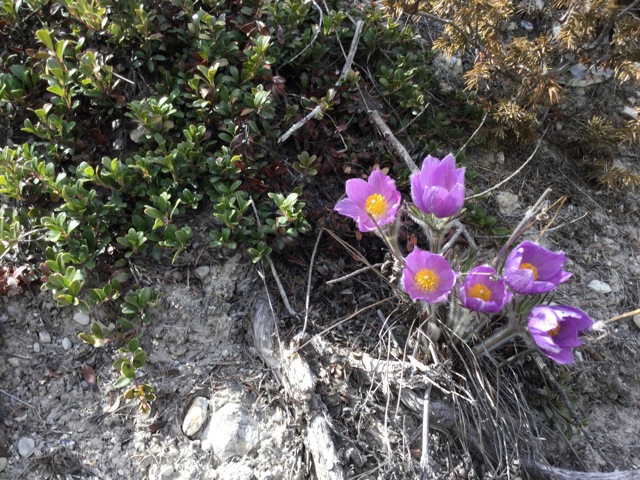 THE GOOD… Pasque flowers (prairie crocus) are the earliest spring flowers along Montane hiking trails. These were photographed along Kootenay Park’s Juniper Trail on April 12 this year. Brian Patton photo.

I’m always amazed how so many hikers rush the season in the Canadian Rockies. The marquee trails leading to high lakes, passes and the alpine are simply not in reasonable shape until early July. Trying to hike them earlier, only creates a mess and damage to the environment.

But I have a number of favourite hikes that try to return to every spring. Trails where we can stretch our legs on dry, snow-free tracks, enjoy, spring wildflowers, and search our bodies for Dermacentor andersoni — the Rocky Mountain wood tick.

But I’ll get to the wildlife later. Here is a list of early hikes touching every national park in the Rockies:

JUNIPER TRAIL, KOOTENAY NATIONAL PARK—4.5 km round-trip. This has been a first-hike-of-the-season for me ever since I started hiking in the Rockies. That’s because it’s the first snow-free trail in the spring. I’ve hiked it as early as March 20. But this season was a bit later than usual, so I didn’t make it until April 12. But as expected, I was welcomed by bone-dry trail and Pasque flowers (see above).

OVERLANDER TRAIL, JASPER NATIONAL PARK—15.5 km one-way. Most of the trails in the Athabasca Valley near the town of Jasper are in good shape early in the season. Several are dry and accessible in April. But if you’re looking for spring wildflowers and a longer hike, I would traverse the open, grassy slopes of the Overlander Trail between the mouth of the Maligne River and the Cold Sulphur Spring (Hwy 16). It’s a great day hike with little elevation gain if you can arrange transportation between trailheads.

MOUNT HUNTER LOOKOUT, YOHO NATIONAL PARK—3.6 km one-way.This steep hike to the site of the lower lookout tower on Mount Hunter is always an early season favourite near the western boundary of Yoho Park. Great views out over the Kicking Horse and Beaverfoot Valleys. And while you’re at it, you can make a full day of it by hiking the 2.3-km trail to Wapta Falls on the opposite side of the highway (a flat walk with fewer wood ticks).

BELLEVUE PRAIRIE, WATERTON LAKES NATIONAL PARK—3.5 km one-way. We haven’t included this trail in the Canadian Rockies Trail Guide (yet), but it is undoubtedly the best early-season hike for wildflowers in the Rockies. It runs across open, rolling grassland between the Red Rock Parkway and the Bison Paddock on the park’s northeast boundary. (Check the Park Visitor Centre or website for access info following Kenow Wildfire closures.)

MULESHOE, BANFF NATIONAL PARK—0.9 km one-way. The steep little trail that most people never think about leads to one of the best early-season wildflower meadows in the Banff Bow Valley. I’ve done this trip as early as mid-May. And if conditions are right, you can continue upwards to even higher viewpoints overlooking the valley.

CASTLE LOOKOUT, BANFF NATIONAL PARK—3.8 km one-way. This early hike gets you up to a lofty 2010m viewpoint overlooking the Bow Valley and across into Vermilion Pass. All but guaranteed that you’ll find calypso orchids in the forest in late May. (I’ve always picked up a wood tick when I sit on the ground near the old lookout foundation.)

AYLMER LOOKOUT, BANFF NATIONAL PARK—11.2 km one-way This is the longest and most strenuous of my favourite spring hikes. It is also the one you’ll want to save until late spring since the gully leading up from the lake to the open lookout ridge (km 7.5 to 9.5) often holds snow into June. But at a lofty 2040m, this old fire lookout site provides an outstanding panorama of Lake Minnewanka from end to end. And be forewarned, I’ve hiked this as late as June 23 and still came back with ticks. 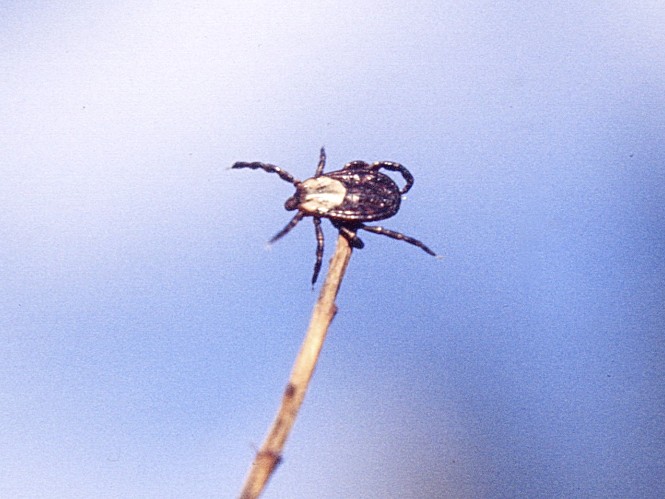 …THE BAD AND THE UGLY. Unfortunately, the earliest trails to dry out in the spring are usually inhabited by mountain sheep which are hosts to Rocky Mountain wood ticks. In this photo, a female wood tick awaits a passing sheep… or hiker. Brian Patton photo.

All of the aforementioned trips are on open, dry slopes. Most are attractive to mountain sheep, which are hosts to the Rocky Mountain wood tick.

But wood ticks aren’t fussy. Hiker blood is just as useful as sheep’s. So you’ll have to guard against the little beasties.

Always take care on these hikes. Use DEET or Picaridin insect repellents, particularly around pant cuffs or on exposed legs. And if you’re going to set your pack on the ground, spray it as well.

Avoid lounging on the ground, sitting on logs, or walking off trail through grass and brush. When you get home, strip off your clothes and toss them into a dryer for 10 minutes or so. Then go for a shower.

Though they can carry disease, Rocky Mountain wood ticks are more of a nuisance than anything (though I do remember one near-fatal case of tick paralysis in Banff years ago). If a wood tick manages to attach itself to your skin, try to lift it off carefully with tweezers (grabbing near the head). Or as I did once, go to emergency and have a nurse or doctor remove it.

While wood ticks are common in the Rockies, the black-legged tick is spreading, particularly in British Columbia and along the western margins of the Rockies. Unlike wood ticks, these tiny arachnids are difficult to see and they can carry Lyme disease.  So far, they are seldom seen in the Canadian Rockies.

I am a big fan of clothing commercially treated with permethrin and permethrin sprays that you can use to treat your own attire. But so far, many of these products are limited by Canada’s Pest Management Regulatory Agency (PMRA). I’ve written several postings on this issue over the past couple years (search “permethrin” on this blog).

I’m in the process of testing various permethrin products, clothing and spray, and will be publishing my findings on this site later this summer.