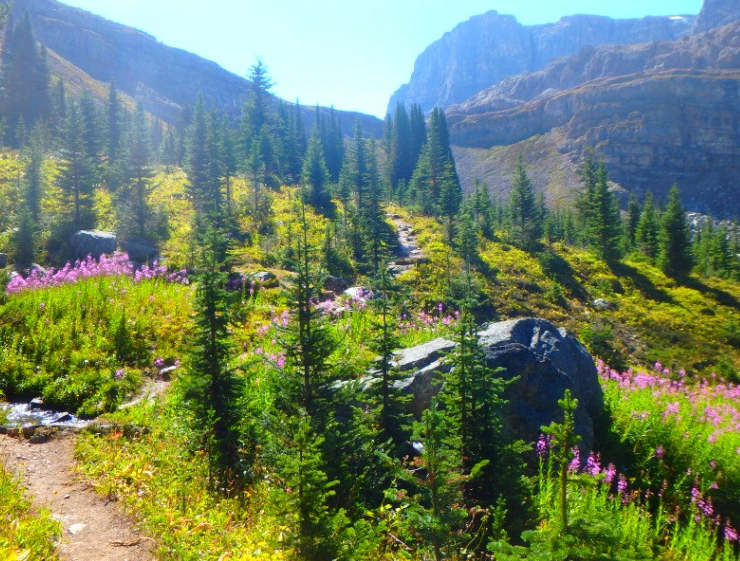 Sunny skies with light smoke haze greeted Jim Shipley and his party as they climbed to Molar Pass on the first day of a 10-day backpack through Banff Park’s Front Ranges to the Ya Ha Tinda Ranch. Dubbed the “Banff DRY” expedition (Direct Route to Ya Ha Tinda) , it did indeed turn into a dry journey over six passes, including a visit with Banff’s recently established bison herd on the Panther River. Jim Shipley photo.

Each summer, Calgary hiker Jim Shipley organizes a multi-day backpacking trip into the remote valleys and passes of Banff or Jasper Park, exploring country that he and his buddies haven’t visited before.

While Jim contacts us for pre-trip tips, we always receive more information than we provide. Following his trek, he composes a detailed report with photos and sends it along for use in this blog—reports that always provide revisions for subsequent editions of the Canadian Rockies Trail Guide and this website’s “Trail Updates” page. See Banff National Park: 9 days in the backcountry (Oct 31, 2014) and Jasper’s South Boundary Trail revisited (Nov 4, 2015).

While many of these trips follow more traditional routes, this summer’s itinerary was very creative. Dubbed “Banff DRY” (Direct Route to Ya Ha Tinda), it would start from Mosquito Creek on Banff’s Icefields Parkway on August 26 and, after traversing Molar Pass to the Pipestone River, follow a more-or-less easterly course across the park’s Front Ranges to the historic Ya Ha Tinda Ranch in the Foothills on September 4. Six passes would be traversed—Molar (2340m), Cotton Grass (2200m), Pulsatilla (2345m), Badger (2545m), North Fork (2425m), and Snow Creek (2255m).

Since the first four nights of the journey utilized designated campsites with strict quotas, the eight-member Banff DRY party had to get creative. They split into two parties of four, with Jim and his three companions following a day behind the lead party for the first four nights. After crossing Badger Pass, the highest point on the journey, Jim’s group caught up with the advance party at Flint’s Park. From this point onwards, the random-camping section of Banff Park, there was no concern about partly size or campgrounds.

When Jim sent his final trip report a couple weeks ago, I was amazed how little had changed in the past 30 years. The section on the Pipestone and up to Red Deer Lakes is still a wet, sloppy slog; no reasonable track has been established down upper Baker Creek to Wildflower Creek; and a lot of crucial trail junctions are still poorly marked.

I’m not suggesting that Banff DRY is a trip you should do, especially the North Fork Pass-Upper Panther River section. But Jim’s account is certainly entertaining and informative, and the photos display some remarkable landscapes and more sunny, blue skies than anyone is ever likely to see on any 10-day backpack.