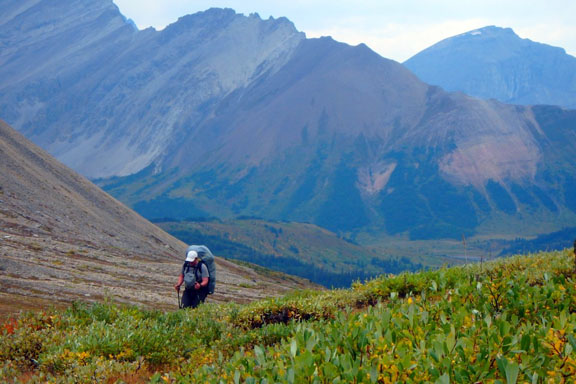 Jim Shipley is one of those contributors. Every summer, Jim and his buddies complete a long backpack in the Mountain Parks. This year they chose Jasper’s remote South Boundary Trail. I advised Jim that the original northern section of the trail beyond Jacques Lake was no longer feasible, despite our trail guide description that still provides a trail outline from Jacques Lake to the Rocky River.

Jim and his buddies, Dan, Ryan and Darcy, hired Mr. Taxi in Jasper to haul them in a crew-cab pickup and mini van to the Rocky Pass trailhead below Cardinal River Divide, just beyond Jasper Park’s east boundary. This is the preferred access to the north end of the South Boundary after a decade of post-wildfire regrowth has devoured the Breccia Creek route beyond Jacques Lake. After crossing Rocky Pass, the party reached the Medicine Tent River and headed south for the trail’s highlight, Cairn Pass (2255m).

You can trace the party’s progress to the Nigel Pass trailhead in Banff National Park by reading our description 122-South Boundary Trail in the Canadian Rockies Trail Guide. But Jim provides some useful insights and a few new cautions along the way:

* The South Boundary Trail was closed during the first half of the summer due to a rambunctious grizzly bear(s) that was tearing into patrol cabins and tack sheds along the route. By the time Jim’s party started its trip in August, the closure had been lifted in place of a bear warning. On their second day, climbing from Medicine Tent Campground to Cairn Pass, they noticed a motion-sensitive “wilderness camera” focussed on a nearby bear-rub tree. The tree was wrapped with barbed wire to collect hair samples that might be used for DNA identification of passing bears, and maybe the marauding grizzly.

* As they hiked south from  Cairn River Patrol Cabin to Cairn River Camp,  they encountered several sections of trail washed out by the 2013 floods, particularly at the Cairn River ford. These washouts made travel and route-finding difficult at times, but they got through by following yellow diamond markers tacked to trees by Parks Canada.

* Not far beyond Cairn River Camp, they entered the 2006 burn, a stretch that can be hazardous due to falling snags, particularly during windy days. And like most burned wilderness trails, the route is often difficult to follow thanks to vigorous regrowth that is consuming the track.

* Beyond the Southesk River suspension bridge, they found signage to Southesk Campground confusing (and, apparently, our trail description as well). They never did discover the site. 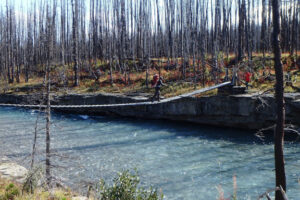 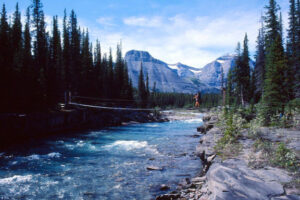 Southesk River bridge when we hiked it many years before the 2006 burn. Brian Patton photo.

* Jim describes the Isaac Creek Patrol Cabin as “Bear Central”, and his party encountered a large stainless steel bear trap in the front yard and a high-resolution microphone for capturing wildlife sounds. (When we passed this way many years ago, the Isaac Creek cabin’s roof had just been removed by a ravenous grizzly.)

* Also noted, hikers no longer cross to the east side of the Brazeau River between Brazeau River Campground and Jonas Pass Junction. Since the hiker bridges are no longer maintained, and fording the Brazeau is a hazardous enterprise, the trail along the east side of the river and the Wolverine South Campground are now reserved for horse parties. Hikers follow a secondary trail on the west side of the river throughout this section (the track is faint in some sections, but watch for square blazes on trees to stay on route).

Other than these comments, the South Boundary Trail remains pretty much as we describe it in the Canadian Rockies Trail Guide. But conditions are always changing in the backcountry, particularly on long, remote routes like the SBT. Always make sure all your questions are answered at the Jasper Visitor Centre trail desk before you set off on any wilderness adventure.