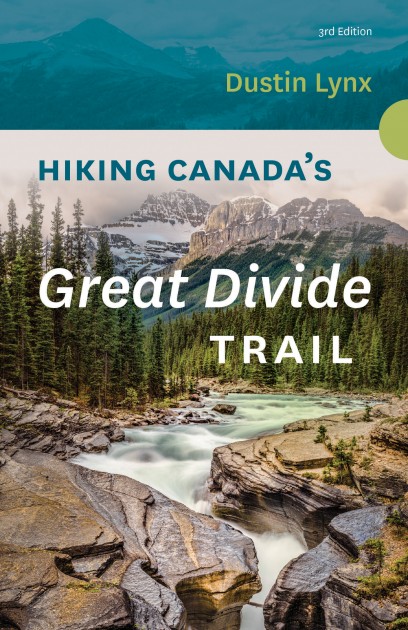 The 3rd edition of Hiking Canada’s Great Divide Trail by Dustin Lynx was released this summer as a paperback as well as a digital version. Published by Rocky Mountain Books, the new edition is available through a variety of regional book outlets (bookstores, outdoor sport retailers). The paperback and Kindle editions can also be purchased at amazon.ca.

It has been 18 years since Dustin Lynx released the first edition of  Hiking Canada’s Great Divide Trail.

This summer he published a totally revised third edition of the guidebook, which remains the best source for intrepid backpackers who want to tackle this daunting journey. And I’m sure that Dustin found this revision daunting as well.

Today’s Great Divide Trail is an unofficial route made up of very popular trails with overbooked campgrounds and, at the other end of the spectrum, remote overgrown tracks with DIY campsites and unbridged rivers.

Despite its many obstacles, scores of dedicated backpackers tackle all or part of this daunting journey every summer.

Some backpackers are inspired by the challenges. Others are frustrated that it’s not as well-defined and posted as America’s Appalachian and Pacific Crest trails.

But today’s difficulties haven’t always been the case. Though never an officially designated trail, backpackers enjoyed a more straight-forward journey four decades ago.

Dustin provides an excellent overview of the GDT and its many ups and downs in this new edition. But since we were involved with the concept from the beginning, I thought I might provide a few notes from the past. 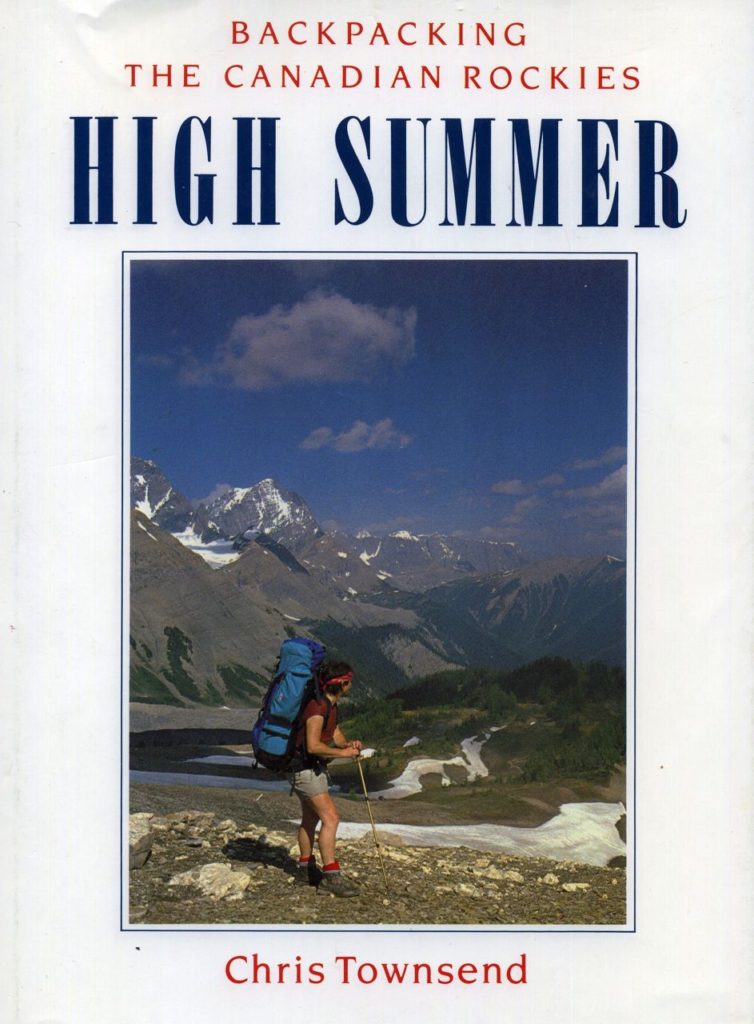 Hiking the Great Divide Trail was more straight-forward back in 1987 when uber-backpacker Chris Townsend completed a 900-mile trip from Waterton to the Yukon in a single season. No campsite quotas, fees or decommissioned trails, and a lot less burned forest.

Our coverage of the provisional GDT led to a fair amount of interest during the 1970s and 80s. In 1976, we lent support to long-distance backpacker Mike McReynolds during his successful summer trip from Waterton to Mount Robson. Though sections outside the parks were not defined, he had little problem improvising and navigating the gaps. (I detailed some of his adventures in Mike from Frisco, Jan. 4, 2014.)

I was working at Mount Robson in 1996 when Dustin Lynx hiked through on his preliminary survey of the Great Divide Trail between Waterton and Kakwa. We had a brief get-together in Robson, where he outlined his intention to publish a GDT guidebook.  I lent my encouragement for his project, though I thought secretly he might be tilting at windmills. After all, the GDT languished for 25 years with very little progress towards establishment.

When we published the 7th edition of the Canadian Rockies Trail Guide in 2000, we dropped our description of the GDT. We simply felt it was something that would never be established. But Dustin Lynx wasn’t so negative. That summer he published the first edition of Hiking Canada’s Great Divide Trail.

I have a print edition of Dustin’s first edition, so I bought the digital version of the third. Generally, I like digital guidebooks. Using the search box allows me to find just about anything and go anywhere I want immediately. I can screenshot maps. There are direct links to other sources.

However, when I recently browsed the print edition in a Banff bookstore, I was a bit jealous. There’s something about a well-produced physical book that can’t be reproduced on a tablet screen. A print edition is certainly more conducive for casual browsing, it looks better on your bookshelf and, if you ever meet Dustin Lynx, you can have him sign your copy. So, if I didn’t already have the digital version, I would be tempted to spend an extra $20 for the print edition.

First off, the black-and-white photos and maps of the first edition have been replaced with colour versions. There are also colour elevation profiles for each section of the route. And there are a lot more variations to the route, particularly in the national parks where wildlife concerns and route popularity has inspired strict quotas and increased regulations, and

It takes a brave author and publisher to release a new edition of the GDT guidebook at this point in time. Everything seems to be in a state of flux all along the proposed route, both inside and outside of the parks. But then, that might be precisely the reason to publish a revised edition.

Unfortunately, certain aspects of the guide are essentially out-of-date as of the publication’s release. For example, northbound hikers will discover that the first 60 kms or so of the GDT is indefinitely closed in the wake of the 2017 Kenow wildfire and will likely remain so for the next year or more. The author does mention this conflagration and the uncertainties in its wake, but the forest landscape he describes between Upper Waterton Lake and Sage Pass is dramatically altered.

The increase in backcountry use in recent years has spurred national and provincial park administrators to come up with a wide variety of new requirements. Online reservations and prepayment are mandatory in nearly every jurisdiction along the route. The days of simply strapping on your pack and setting off with a flexible timeline and itinerary are long gone.

It is amazing that Dustin has managed to publish most of these new requirements, though once you read through the “Passes, permits and campsite reservations” chapter, your head will undoubtedly be spinning.

Among the late-breaking administrative changes is the mandatory campsite reservation and prepayment system instituted last spring at Mount Assiniboine’s Lake Magog and Og Lake  campgrounds. And reference to the use of Greyhound buses for travel to and from various access points on the GDT is no longer valid (what Greyhound?). Both changes were obviously too late to make the publication cut.

But these are problems every print edition guidebook faces in the rapidly changing landscape of the 21st century, including our own Canadian Rockies Trail Guide. While we have created our own website to keep readers current, Dustin directs his readers to two external digital resources for the latest updates.

The resurgence of the Great Divide Trail Association (GDTA) in 2013 injected a new energy and interest in the development of the GDT. The association is currently working with land managers to improve routing and access along the length of the proposed trail. This includes a website that provides a vast amount of information on the GDT (just about anything and everything you need to know including current updates). This website is one of the best I’ve seen anywhere.

Another supplementary online resource is the Guthook Guides app developed by Atlas Guides. Once you download the free app, you can purchase the entire GDT ($24.99 CND) or sections thereof ($5.49 CND), which provide text descriptions, maps, elevation profiles and GPS references, plus the latest reports from people hiking the route.

Few will thru-hike the Great Divide Trail as outlined in the 3rd edition of Hiking Canada’s Great Divide Trail, particularly over the next couple of years (Waterton trail closures). But that’s not the real value of the book. The vast majority of GDT enthusiasts just want to tackle sections of the trail, and that’s where this edition shines. Lots of photos, maps, and information, including alternate routes. This is an invaluable overview of the Great Divide between the U.S. border and Kakwa Provincial Park.