When Bart Robinson and I first published the Canadian Rockies Trail Guide, we wanted to provide information on all the known trails in the mountain parks. In addition to the primary day hikes and backpacks we surveyed and measured ourselves, we also collected snippets of information, mainly from park wardens, on the longer, more remote trails. 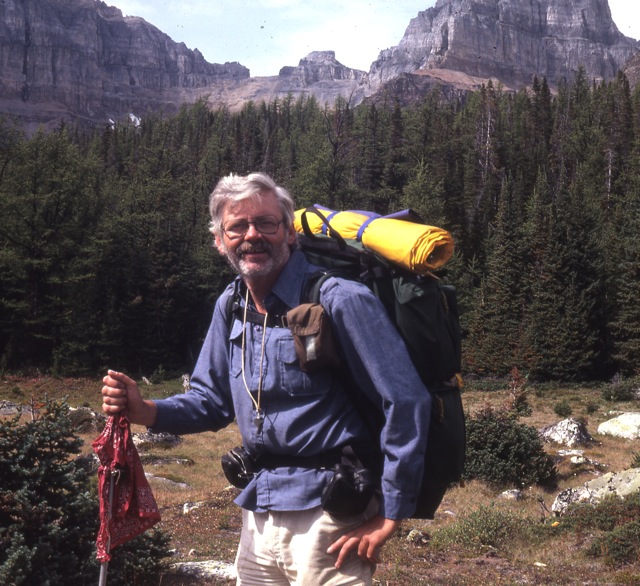 Mike McReynolds setting off on another adventure in the Rockies.

Another component of that first edition was a six-page summary of the proposed Great Divide Trail. Lo and behold, a long-distance backpacker from San Francisco named Mike McReynolds showed up on our doorstep during the summer of 1976, trail guide in hand and midway through a solo trek on the GDT from Waterton to Mount Robson.

Mike completed his Great Divide summer at Mount Robson, but he was enticed back to the Rockies by the possibilities of so many seldom-travelled trails that were barely mentioned in our guidebook. Perhaps he saw the chance to be a backpacking pioneer in country that was primarily the domain of wardens and commercial horse outfitters.

Over the next seven years, Mike returned to the Canadian Rockies most every summer to ford the unbridged rivers and explore the remote passes and valleys of the mountain parks. With the exception of the occasional backpacker who might join him for a few days, his trips were solo.

In Banff he trekked to Dormer Pass and River, Panther River, North Fork Pass, Divide and Peters Creeks, the Clearwater River, Whiterabbit Pass and the Castleguard Meadows. In Jasper, he branched off the North Boundary Trail to Little Heaven, Glacier, Hardscrabble, McLaren and Moose Passes, and probed the Willmore Wilderness.

When we were working on the third edition of the trail guide in 1984, Mike provided detailed descriptions of all the trails he hiked in the mountain parks. Now we had the opportunity to provide more than single-paragraph summaries of these trails, and using Mike’s descriptions as a base, we gave each of these trips its due. As a result, the third edition of the trail guide grew by nearly 100 pages.

Mike is long retired from his epic backpacking days and lives quietly with his dog Huli on the Oregon Coast. But his love of the Canadian Rockies still glows, and whenever we need a photo from some remote corner of the parks, he always obliges by loaning a slide from his vast collection.

Guidebook authors often ask readers to provide comments and updates for the next edition of their books. But I don’t know of any guidebook that was shaped by a contributor as much as ours. Here’s a big thank you to Mike. We know the pay was lousy, but we hope you enjoyed your work.