Hiking in Smoke: The new normal?

Climate change has replaced cloudy skies and rainy days with forest fire smoke. The summer of 2021 is no exception. 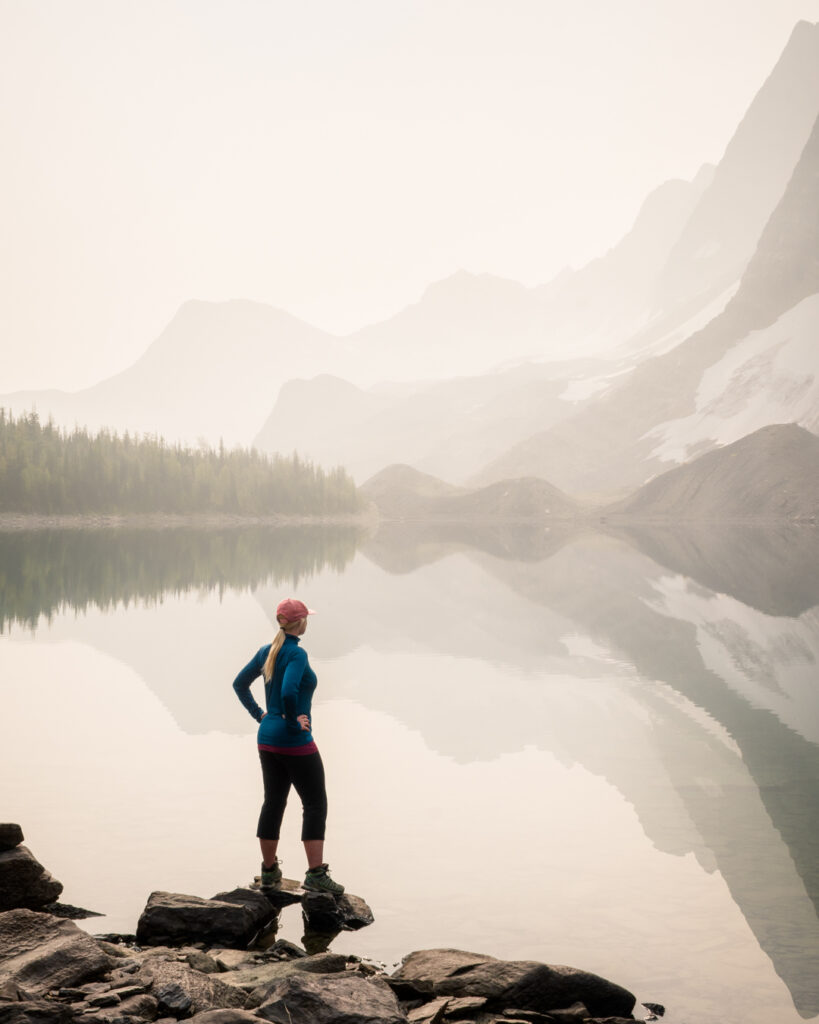 One of the problems in the early days of the Canadian Rockies Trail Guide was cloudy conditions and showers.

Thanks to these unsettled conditions, it wasn’t until we published the third edition that we managed to replace most of the cloudy photos with blue-sky images.

I laughingly remarked that all those photos of blue-skies with white fluffy clouds were misleading our readers as to what they’d likely experience.

My, how things have changed!

When we set out to publish the first edition of the Canadian Rockies Trail Guide, the only recent major fire in the Mountain Parks was the Vermilion Pass wildfire, which burned 1579 ha on the Kootenay-Banff Park border in 1968.

Prior to that, the last major fire was the Survey Peak wildfire in July, 1940, which burned around 4000 ha bordering Glacier Lake and Saskatchewan River Crossing.

With few exceptions, the 30-year period following the publication of the first edition of the Canadian Rockies Trail Guide was smoke free. Then came the new millennium and smoky summers.

One of the first major fires occurred in Kootenay National Park in August, 2001, when lightning ignited a fire on the slopes of Mount Shanks. After slowly growing to 600 ha, high winds swept through the park, and the fire blew-up to 2400 ha in just 2.5 hours. The Mount Shanks fire eventually consumed 3487 ha and spread lots of smoke over Banff National Park.

If Mountain Park hikers thought that was annoying, nothing prepared them for the summer of 2003. That turned into one of British Columbia’s biggest fire summers. By mid-July smoke haze descended over most of the Rockies.

Travel was restricted on Kootenay Park’s Highway 93S. The Rockwall Trail was closed for the duration, and thick smoke enveloped the southern half of Banff Park. When the fire finally was under control after 40 days, 12.5 percent of Kootenay Park had burned. 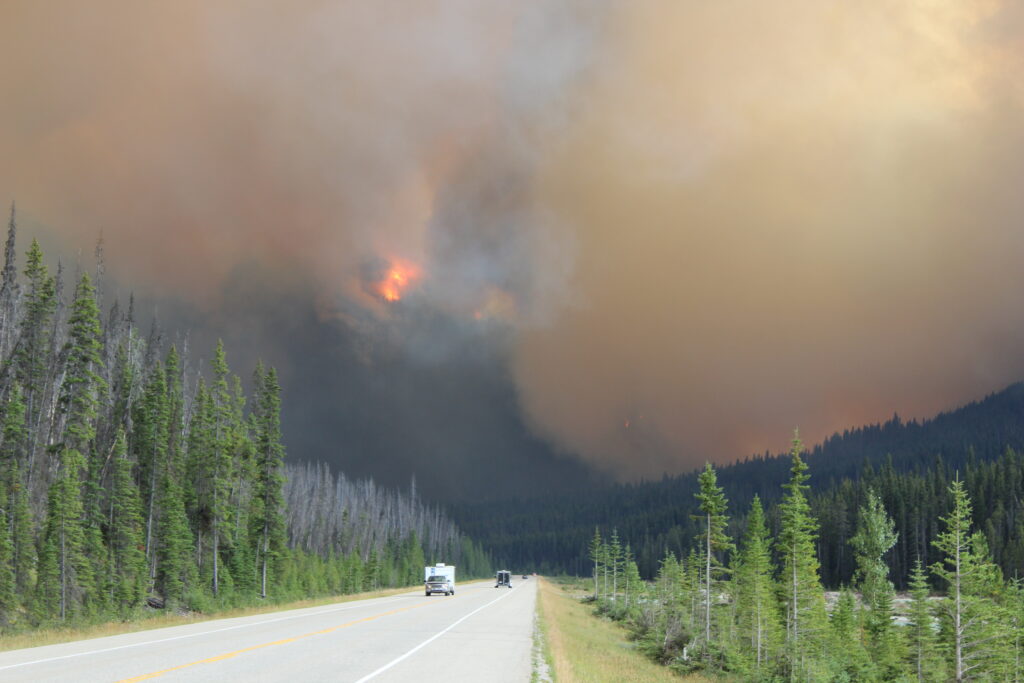 The Numa Creek fire, August 22, 2013. A spectacular blaze that is barely worthy of mention in the recent history of Mountain Parks’ wildfires. Photo by Brian Patton.

On July 15,  2017, a lightning strike ignited a fire in Kootenay Park’s Verdant Creek valley. The ensuing fire consumed 18,017 ha over the next two months in Kootenay and Mount Assiniboine Parks. Sunshine Village was closed as were trails along the continental divide in Banff from Egypt Lake to Citadel Pass.

The most devastating wildfire of all, the Kenow Fire, occurred in Waterton Park in early September, 2017. On August 30, lightning ignited a fire in British Columbia, 10 kms west of the Waterton Lakes Park boundary. It smouldered and grew slowly until September 11, when winds whipped it over the continental divide and through the northwest section of the park.

As the fire moved into grassland northeast of the park 24 hours later, Waterton was left with 19,303 ha of burned forest and grassland, and extensive damage to visitor facilities along the Akamina and Red Rock Parkways. Over 80% of the hiking trail network was affected. 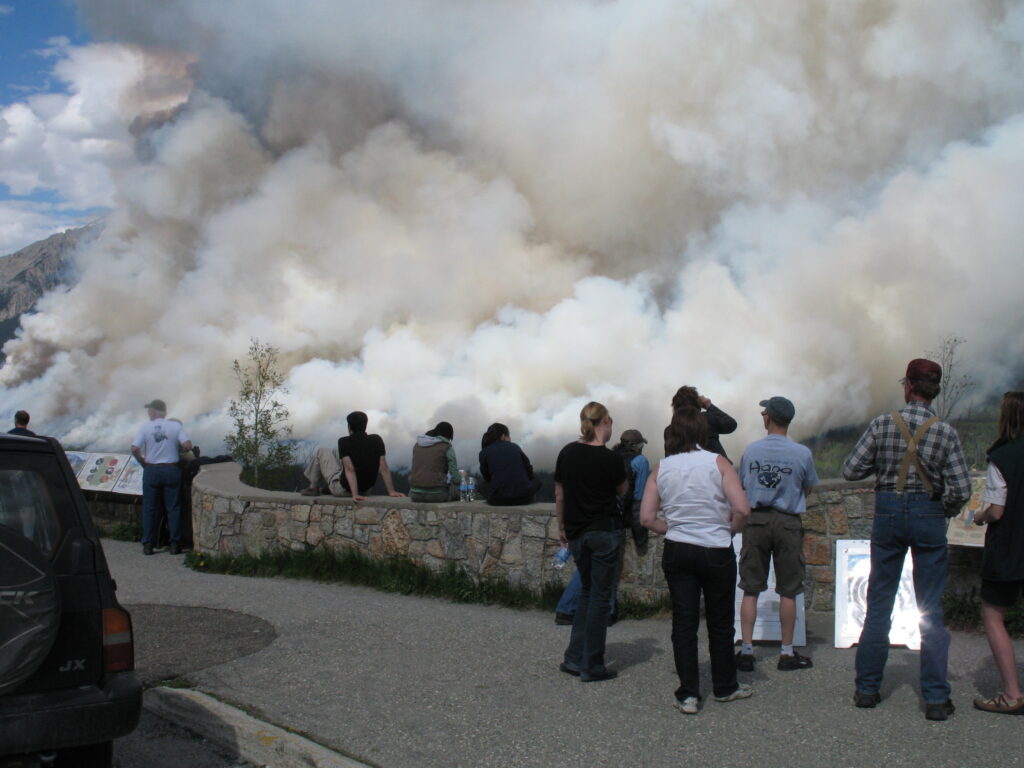 Not all the smoke is the result of wildfire. Parks Canada initiated a policy of prescribed fires in the 1980s to reduce the fuel load and restore the historical fire cycle. These controlled burns were usually set in late spring or early autumn.

Unfortunately, these were the most reliable clear-sky periods in the Rockies. Now hikers were often subjected to smoke from these intentional fires.

But by far the most extensive and ambitious burn in Banff’s Bow Valley occurred on the Fairholme Range in 2003, when the slopes above the Trans Canada Highway were burned in stages from Johnson Lake to the park’s east boundary over the course of a full summer.

Subsequently, prescribed burns have been expanded to most front country and backcountry valleys in the Mountain Parks, including Kootenay, Yoho and Jasper.

As I’m posting this piece, more than 240 wildfires are burning in British Columbia, and a pall of smoke engulfs the Rocky Mountains.

All of this is happening while record numbers are flocking to the parks for day hikes and backpacking trips. Nearly all backcountry campsites were reserved before the season even started. Many smoke-sensitive backpackers have cancelled reservations.

While even the smokiest of summers experiences periods of clear weather, I have no problem identifying online photos taken during the past five summers. There’s often a haze partially obscuring the “postcard” images taken on popular trails.

There’s still hope for the summer of 2021. August weather can flip 180 degrees from what is experienced in the first half of the season. Then again, most of our largest wildfires have occurred in August. The “new normal”?

It’s enough to trigger fond memories of sloshing through mud and soggy underbrush in the good old days. It seems the air was always fresh and clear back then.

The Assiniboine Lodge webcam on July 31, 2021. Check the cam in the days and weeks ahead. It provides a good idea of how clear the air is in the high country. 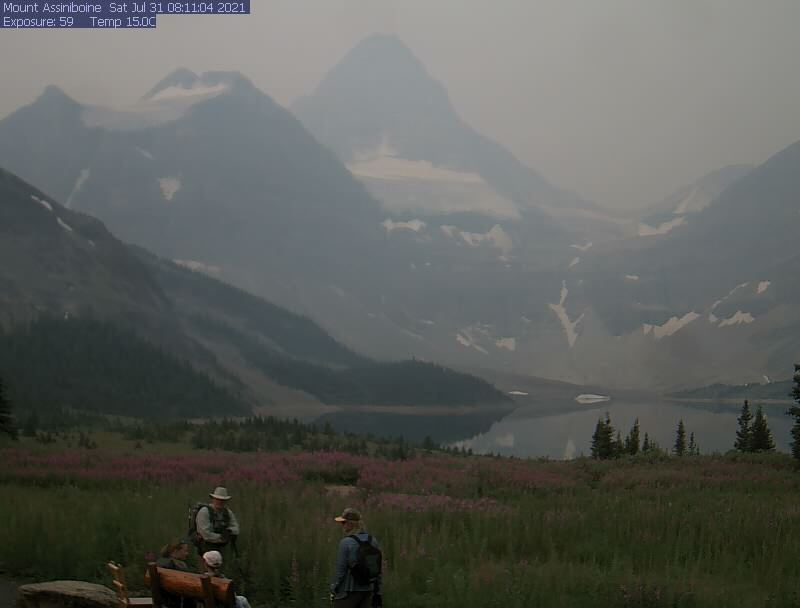