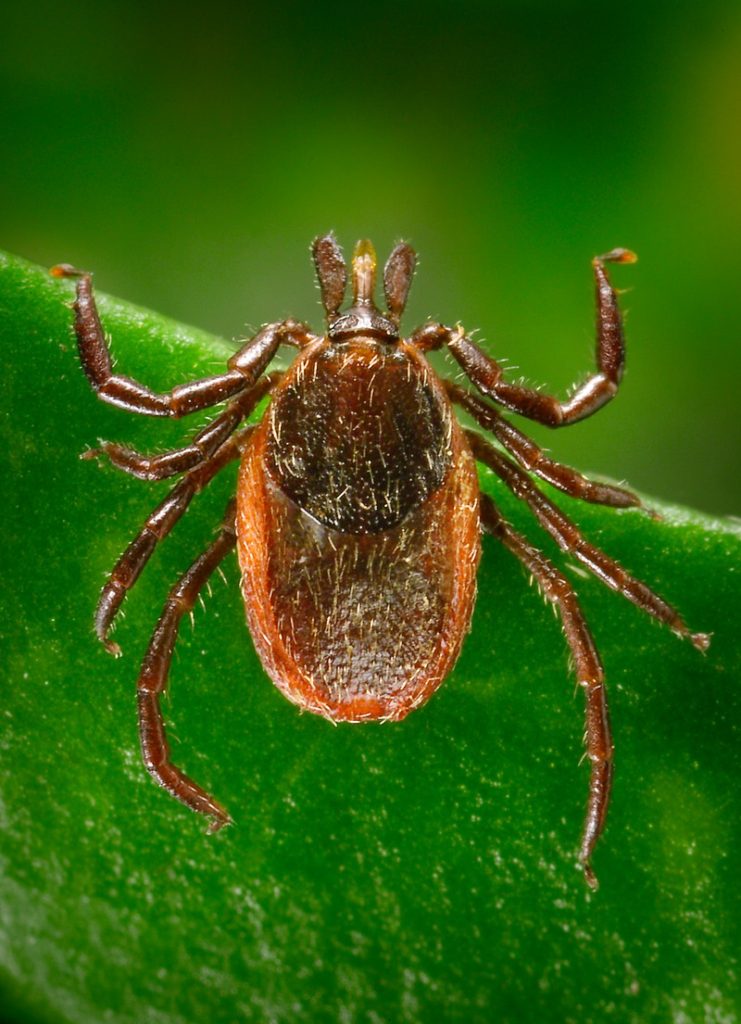 Western black-legged ticks (Ixodes pacificus) are potential carriers of Lyme disease in western Canada. Permethrin-treated clothing can be an effective barrier against ticks, mosquitoes and other bothersome insects, but the clothing has been difficult to purchase in Canada. Centres for Disease Control and Prevention (CDC) photo.

After years of frustration, Canadians are now able to purchase clothing that is commercially treated to protect against mosquitoes and ticks and the diseases they can carry.

Using “No Fly Zone by Burlington” technology, Marks (aka Marks Work Wearhouse) released a line of men’s and women’s clothing under its Wind River label in May. Shirts, pants, jackets and hats produced with permethrin-treated cloth are now available in major Marks outlets and online at Marks.com.

Similar clothing manufactured with the insecticide permethrin has been available in the rest of the world for years.

I originally addressed this issue in “Ticks, Permethrin and Canadian Hypocrisy” (April 2017). As mentioned in that posting, permethrin-treated clothing and spray for self-treatment of clothing has proved to be very effective in stunning and repelling a wide variety of insects and ticks.

But the Canadian Pest Management Regulatory Agency (CPMA) has been reluctant to approve these products, even though Health Canada recommends that people purchase permethrin-treated clothing when travelling into areas of the world where insect-transmitted diseases are common.

My original blog has since gone viral, and I receive comments daily from people throughout Canada, particularly those concerned about the spread of Lyme disease. Hopefully, some of their fears will be put to rest by the availability of No Fly Zone attire.

When Marks announced it was releasing a line of permethrin-treated clothing, I contacted head office and arranged an interview with an executive who has been dealing with the issue for sometime. He described some of the hoops the company had to jump through on the road to approval.

Every company that wants to market permethrin-treated clothing in Canada must make a separate application to the CPMA. And even though permethrin-infused attire has undergone rigorous testing and been approved by the U.S. Environmental Protection Agency (EPA), and in nearly every country other country in the western world, the CPMA demands rigorous product testing and imposes stringent requirements.

According to my source, Marks worked with the CPMA for a decade to secure approval for its No Fly Zone clothing in Canada. Each time they thought they had answered all the questions about product safety, the CPMA moved the bar higher.

When Marks did finally receive approval, it was stipulated that all clothing and headwear be produced with a lining, a second layer acting as a barrier between the permethrin-treated cloth and the wearer. It is an added cost that producers in the rest of the world do not incur.

No Fly Zone by Burlington

Marks worked with Burlington Fabrics (Greensboro, North Carolina) to produce its line of attire. Under its No Fly Zone label, Burlington produces permethrin-treated material for  a number of U.S. outdoor suppliers, including LL Bean, Stetson, Cabela’s, Solstice and Farm to Feet.

While Marks is not allowed to advertise that its clothing is effective against ticks, Burlington suffers no such restriction in the U.S. The company’s No Fly Zone Insect Repellency web page explains all aspects of the process and how an insect’s nervous system is affected upon contact with treated fabric.

Further support comes from a recent study published in the Journal of Medical Entomology (May 24, 2018) and summarized in a report by CBS News “Study confirms this method of repelling ticks really does work”.

Through several decades and thousands of kilometres of hiking in the Canadian Rockies, I’ve experienced good years and bad years when it comes to bugs, particularly mosquitoes.

And every spring is a bad spring when it comes to wood ticks on south-facing slopes (I always need to shake hitchhiking ticks from my clothing, and once I went to the hospital to have a nurse remove one that attached itself to my back.)

I was always reluctant to use DEET products unless conditions were really bad. After years of getting bitten, you develop an immunity to swelling and itching, but not to mosquitoes flying in your face and the sensation of their pin-pricks.

That’s why a few years ago, I started experimenting with permethrin-treated clothing—purchased in the U.S. or ordered from the UK and Europe (UK and EU firms were willing to ship treated attire to Canada, unlike U.S. outfitters who were constrained by Canadian restrictions). I’ve used Bugsaway (Ex Officio), Insect Shield (Outdoor Research and Buff) and Nosilife (Craghoppers). All use similar permethrin-treated fabrics, and I’ve found all to be equally effective. 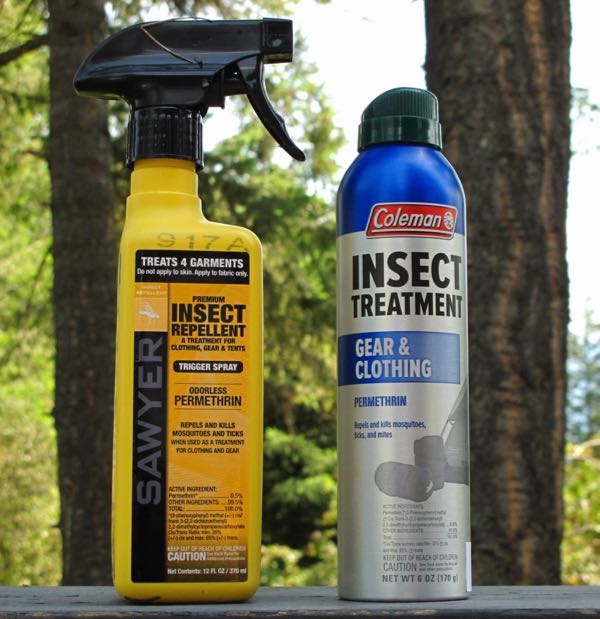 Permethrin sprays for clothing treatment are readily available in the U.S., but nowhere to be found in Canada. It is still possible for travellers to purchase these products in the U.S. and bring them back into Canada. Brian Patton photo.

Many outdoors people, especially hunters, swear by permethrin spray specifically designed for treating clothing. Of course, most of these enthusiasts are in the U.S.

If you want to self-treat your clothing with permethrin in Canada, you’ll have to purchase it in the States. Permethrin spray could be ordered online for shipment from the U.S. to Canadian addresses a year or so ago, but not today. Though I’ve not seen any documentation, it appears the PMRA is trying to stem the flow of permethrin spray into Canada.

But Canadians are a creative lot. UltraShield EX Insecticide & Repellent is sold as a fly spray for horses in Canadian agricultural outlets (0.50% Permethrin). Then there is The Protector House & Garden Liquid Insect Spray (and similar brands), also available in Canada, which contains 1.25% permethrin as the active ingredient. Desperate Canadians are purchasing these products to treat their clothing.

This is all rather ridiculous when you consider that sprays manufactured specifically for clothing should be a safer and more effective alternative than products manufactured for application to horses and garden plants.

I have used permethrin clothing sprays purchased in the U.S. However, as a hiker, I find it an expensive and fussy alternative to commercially-treated clothing since you need to repeat the treatment every six weeks or so and take care with how treated items are laundered and stored.  I do keep a couple cans handy for spraying hats, socks and pant legs.

On the other hand, American hunters find spray quite useful since they can apply it to their hunting clothes and don’t have to worry about the application lasting longer than a few weeks. And there’s no better source of testimonials than these sportsmen. After years of crawling through the bush and grass, they report that they no longer return home covered with ticks like they did before permethrin spray came along.

Black-legged ticks and their potential to spread Lyme disease is an issue that affects not only hikers, but anyone who spends time outdoors.

While I have no personal experience with Lyme, nearly everyone where I live in southern B.C. knows someone who has been treated for the disease, or worse, weren’t diagnosed early and now suffer with the chronic form.

I have a brother-in-law who contracted the disease in B.C.’s Lower Mainland, and has dealt with its devastating consequences for over a decade. (He gave up on Canada’s inadequate medical treatment for chronic Lyme disease long ago.) 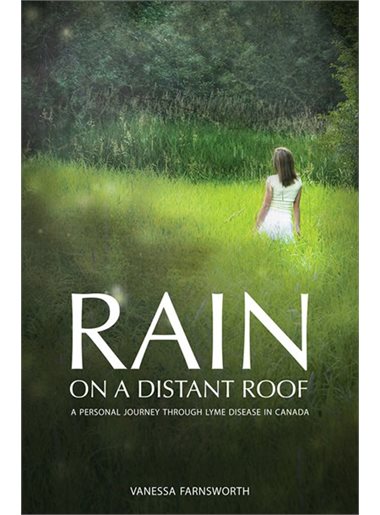 Author Vanessa Farnsworth describes her nightmarish struggle with Lyme disease acquired in British Columbia’s East Kootenays in Rain on a Distant Roof: A Personal Journey Through Lyme Disease in Canada.

Most of the comments to my original blog have come from concerned citizens in the Maritimes and Ontario, regions where Lyme is most often found in Canada. These respondents all suffer the same frustrations, trying to acquire protection for themselves and their children when they’re out in the woods.

Canadians are justifiably concerned about tick and mosquito transmitted diseases and are willing to go to great lengths to protect themselves (horse fly spray and ant repellent?).

I can understand that Canada’s Pest Management Regulatory Agency doesn’t want to encourage a false sense of security regarding disease protection. The PMRA is being careful and fastidious when it comes to approval of  insecticide for use by the general public, but the agency should be willing to approve products that have a proven record of safety and effectiveness everywhere else in the world.

In the meantime, I am encouraged that Marks is continuing to work with the PMRA in its efforts to develop permethrin-treated products. Canadians now have a home-grown option for protection.