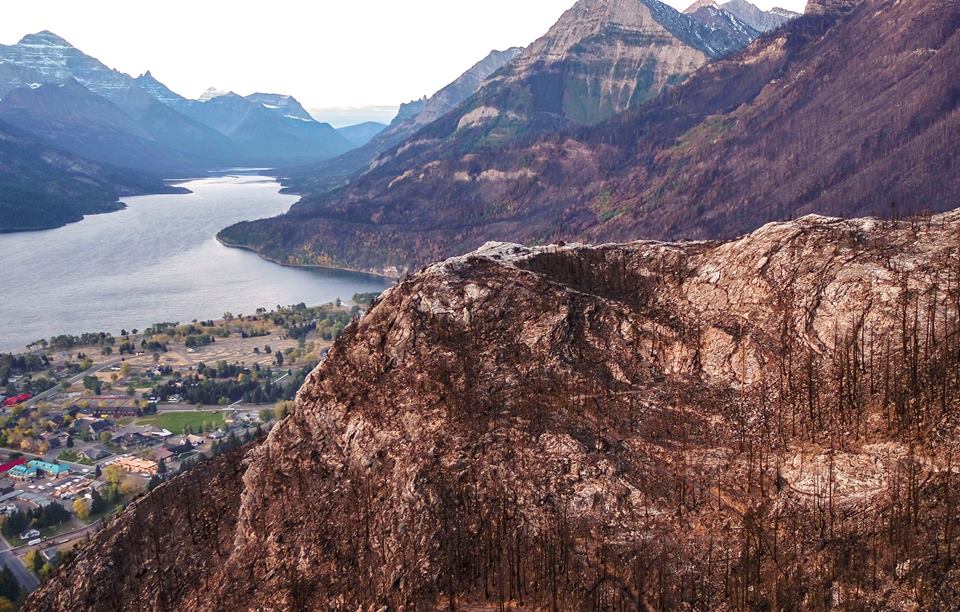 The Bear’s Hump trail (foreground) was torched by the Kenow fire that swept through Waterton Lakes Park in mid-September. A back-fire was set south of the townsite to contain the fire, but it destroyed forest encompassing the trail to Bertha Falls and Lake. What sort of trail restoration can we expect next summer? Parks Canada photo.

It is estimated that 30% of Waterton Lakes National Park was burned by the Kenow wildfire that swept through the park in mid-September. The scenes of charred forest and buildings left park fans, including hikers, wondering what the future holds.

For many who spent their entire lives enjoying Waterton’s unique landscape and flora, there was despair at what transpired in less than 48 hours. There was a tremendous sense of loss (see Waterton Park: After the Kenow wildfire).

Lockey Craig, president of Waymarker Hospitality, which operates several restaurants and hotels in the park, provided a wistful interview with the National Post following the fire:

“It will be decades before the forest looks like it used to, no doubt about that. The long-term impacts on the guest experience and visitation in Waterton are going to be horrific, no question about it. The backcountry is burned to a crisp.” 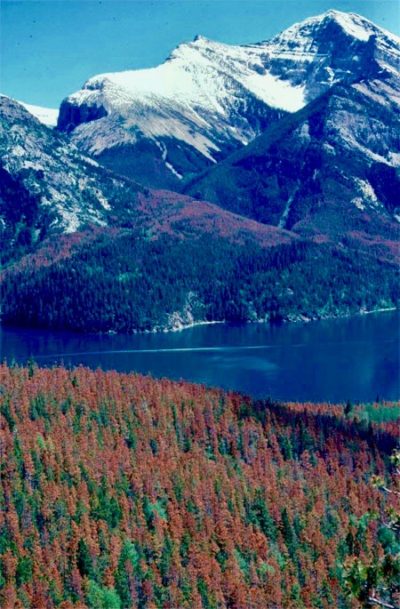 Last summer’s fire isn’t the first time Waterton’s forests have been decimated. In the late 1970s, the park bore the brunt of a mountain pine beetle outbreak that killed thousands of pine trees in the Waterton Valley. Parks Canada photo (1980).

But Craig’s bleak assessment of Waterton’s future is excessive. The park has experienced many landscape-altering events in the past, including wildfires. And when the mountain pine bark beetle invaded the Rockies in the late 1970s, Waterton was one of the hardest hit areas; forest on both sides of the Waterton Valley were stained red by dead and dying pine trees.

Several forest fires swept northern Kootenay National Park during the past 50 years, and even though the popular Stanley Park trail burned twice (1968 and 2003), visitors were enjoying the hike to the Stanley basin soon after the burns. And Parks Canada had an excellent opportunity to interpret the role of wildfire in shaping the park’s landscape.

Parks Canada will have an even greater opportunity to interpret fire ecology in Waterton Park, but there will be a lot of work to be done first.

Parks Canada will need to replace a lot of infrastructure before the park is capable of welcoming the level of visitation prior to the Kenow fire.

The park visitor centre was destroyed by the fire. Though plans were underway to build a new visitor centre in the townsite, a temporary facility will be needed for 2018.

Both the Akamina and Red Rock Parkways suffered extensive damage from the fire. Road guard rails and signage burned. Sections of the Crandall Campground were destroyed.

On a positive note, the recently-refurbished facilities at Cameron Lake and Red Rock Canyon appear to have been saved from the flames, though just barely.

Of more immediate concern this winter are the grasslands that were scorched on the esker south of the bison paddock. A herd of elk that traditionally grazes there every winter will not find forage this winter and will be moving north and east onto ranches outside of the park.

In the spring, there is concern that a variety of invasive weed species from outside the park will get a foothold in this special, grassland ecosystem.

A symposium is planned for January, when stakeholders can assemble to address the many issues in and outside park boundaries.

Getting trails back in shape

I have no inside information concerning Waterton’s plans for trail restoration, but it is a hiker’s park and getting affected trails reopened should be a top priority. Hopefully, Parks Canada will beef up its trail crew or let contracts to tackle the task.

With the exception of Crypt Lake, Wishbone and Vimy Peak on the eastern side of the Waterton Valley, nearly all trails in the park suffered some damage from the fire. First priority will likely be Bear’s Hump and Bertha Lake, both popular trips from Waterton townsite. And there was fire damage at both ends of the Carthew-Alderson trail that runs between Cameron Lake to the townsite—the park’s most popular long day trip.

All trails will need to be surveyed for damage and safety concerns. Fire often loosens rocks and other hazards on steep hillsides and sometimes erodes trails. There will be lots of deadfall to clear, and some hazard trees near fire-swept trails may need to be removed as well. You can’t remove all hazards in burned forest, so signs will need to be erected to warn hikers of the falling-tree hazard, particularly during windy conditions.

In short, 2018 will be a rebuilding year, and many trails will likely be closed for the entire summer while clearing and safety concerns are addressed. But I fully expect that much of the park will be open and getting back to normal by 2019.