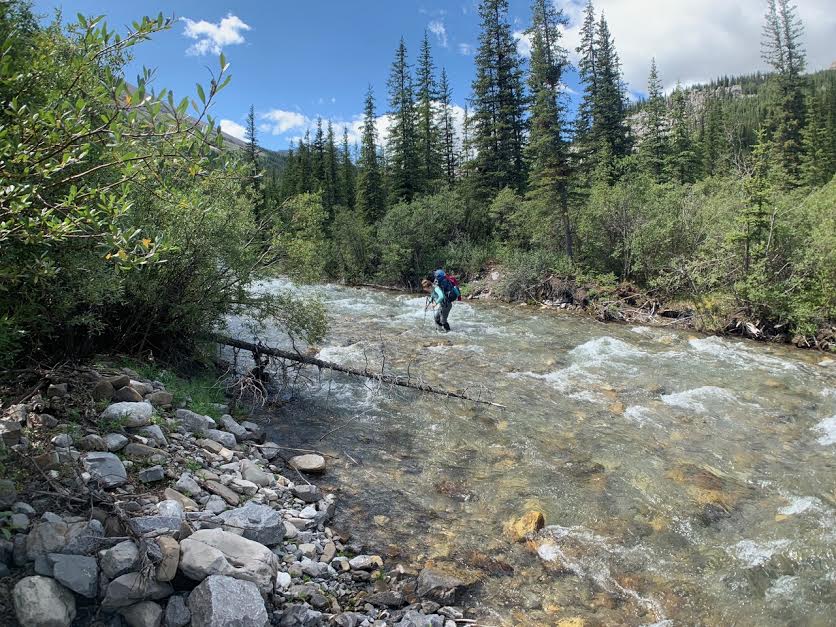 Evelyn Howe wades the Cairn River. Just one of several fords that appeared on the Cairn and at other points along Jasper’s South Boundary Trail following the massive floods and washouts of 2013. The once straightforward trail is now the domain of careful route-finders. Stuart Howe photo.

Despite deteriorating conditions over the past 20 years, Jasper’s South Boundary Trail continues to draw adventurous backpackers to some of the most remarkable wilderness scenery in the mountain parks.

When we measured the South Boundary with a trail wheel from the Jacques Lake trailhead to Nigel Creek in Banff National Park in 1983, it was pretty much smooth sailing. No deadfall to speak of, good track, and only a couple fords. But a trail wheel would be useless and impossible on the trail today.

In order to keep up with the changing scene created by wildfires, floods and lack of trail maintenance, we published two updates on this site in 2015. South Boundary Trail update (June 20, 2015) detailed Jasper Park’s Rogier Gruys’s failed attempt to follow through the burn between Jacques Lake and Rocky River. As a result of wildfire destruction and the loss of the Rocky River suspension bridge, we revised the north trailhead of the South Boundary Trail from Jacques Lake to Rocky Pass, just beyond the eastern boundary of Jasper National Park below Cardinal River Divide.

Another posting, Jasper’s South Boundary Trail revisited (Nov 4, 2015), utilized notes from backpacker Jim Shipley following a trip via Rocky Pass that same year. Both pieces inspired numerous comments and updates that keep arriving on those posts to this day.

While Jim Shipley’s notes provided an excellent preview of conditions, and problems along the revised South Boundary Trail, there were still conflicting reports. Jim lost the trail after crossing the Southesk River suspension bridge and missed the Southesk Campsite. Another more recent hiker claimed that the suspension bridge was gone and recommended the horse crossing on the Southesk River. Yet another backpacker said that the bridge was still in place but there was no way to reach it through the burn.

Enter Stuart Howe and 16-year-old daughter Evelyn this July. Armed with a GoPro camera, a GPS and excellent UTM references, the pair completed the 120-km route from Cardinal River Divide to Nigel Creek in 10 days. Just days after completing the trip, Stuart produced a 2 hour 27 min video on his “Howe’s the Hike” YouTube channel. This entertaining production provides backpackers with the most accurate and informative overview of the trail today.

Stuart has provided us with updates following backpacking trips before, and we are grateful that he has given us permission to link to this YouTube posting. And this is certainly the wave of the future: current videos that give backpackers a unique preview of remote trails that aren’t getting any better with age.

We hope that hikers will keep a current edition of the Canadian Rockies Trail Guide on the shelf as a basic reference volume. This website is also a great reference for trip-planning, especially our “Trail Updates” page and the many comments provided by hikers on individual blog postings. But we also realize that sources like “Howe’s the Hike” and “Martyupnorth” will be important sources in the future.