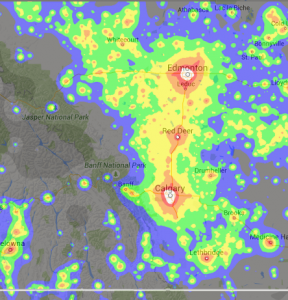 Stargazing and meteor-watching can be frustrating in the increasingly light-polluted night skies of southern Alberta (see the “hot” spots of Calgary, Red Deer and Edmonton on the map above). However, the Mountain Parks beyond the Town of Banff still provide optimal viewing. Check out the full Dark Site Finder Map of North America to view the depressing reality—Alberta rivals the southern California coast as the most light-polluted region in western North America.

The 2015 Perseid meteor shower promises to arrive in the night skies over the Mountain Parks in spectacular fashion this week. Often obscured by clouds or the light of the moon, both the moon (new moon August 14) and the weather are cooperating this year.

The Perseids are the most active and easily viewed of the year’s meteor showers. Since they occur in the middle of August, it is usually mild enough to lie outside  and watch the show. The peak of this year’s Perseids is predicted to fall on the night of August 12-13, and the forecast is for cloudless skies and warm nighttime temperatures for the Mountain Parks.

These days, my preference for viewing the Perseids is Jasper National Park, which was officially recognized as one of the world’s largest Dark Sky Preserves in 2011 by the Royal Astonomical Society of Canada. Living in the Bow Valley for many years, I watched dark skies fade with the growth of Banff and Canmore, and the glow of nearby Calgary rising above the Front Ranges. But with the exception of Jasper townsite, most of Jasper Park is well removed and shielded from the light of major cities and satellite communities.

During three summers living at the Saskatchewan River Crossing Warden Station on the Icefields Parkway, I experienced some incredible Perseids nights. Another memorable viewing came at Lucerne Campground in Mount Robson Provincial Park.

In the meantime, here is an itinerary for my ultimate Perseids  hike. Check into Wilcox Creek Campground, Canada’s highest roadside campground, which is located 2.5 kms south of Jasper Park’s Icefields Centre. Don a headlamp, fill your pack with warm clothing and a thermos of hot chocolate, and climb the Wilcox Pass trail 2.5 km to the open ridge overlooking the Athabasca Glacier. On a clear, moonless night, it would be hard to imagine a more spectacular observatory in all of Canada.

For more information on the Perseids meteor shower, check out the CBC News posting “How to catch the most falling stars”.