Aileen Harmon: Requiem for a hiker 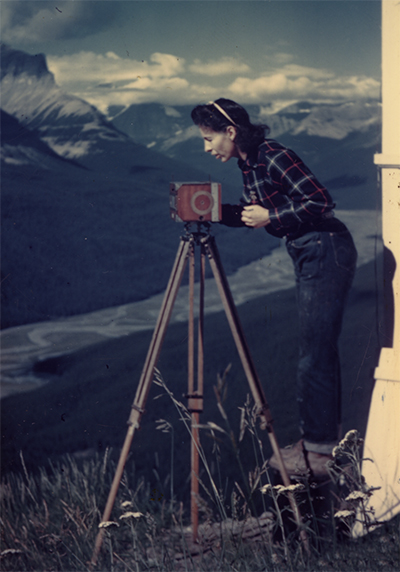 When Aileen died in January, 2015, her niece Carole Harmon contacted me seeking details for this photograph. I immediately identified it as Sunset Lookout in Banff Park. And we guessed that she must’ve been photographing a fire-finder panorama for the lookout soon after it was built in the 1940s. Sure enough, we later discovered a story in her unpublished memoirs describing how the National Parks Branch borrowed an ancient large-format camera from the Alberta Forest Service and delegated her to create panoramic panels  for all the park’s lookouts.

Aileen Harmon was a pioneer hiker and naturalist in Banff National Park—the first child of Banff landscape photographer Byron Harmon and the last of the pre-World War I Banff “kids” who would become the park’s first climbers, skiers and hikers. When she passed away at the age of 102 (five days shy of her 103rd birthday), a flood of memories came back to me. Not just stories about her, but stories she told me.

Where were all these details coming from? We weren’t bosom buddies. In fact, beyond the annual Bow Valley Christmas Bird Count dinner and a couple events in recent years, we hardly saw one another.

Then I remembered. During the 1970s, when Jim Thorsell, Jon Whyte and I were teaching a Rockies appreciation course at the Banff Centre, we inveigled Aileen to tag along on  weekly class hikes as our wildflower expert (the three of us were horrible flower identifiers).

”You never truly know someone until you’ve walked a mile in their shoes,” or walked with them on a dozen trails.

I don’t know how many miles we travelled together in the backcountry, but as any hiker knows, you learn more about a person on the trail than years spent living next door. Those hikes and the long drives to the trailheads are the source of my memories.

When we hiked to Aylmer Lookout above Lake Minnewanka in June 1973, I photographed her as she studied Mount Aylmer, the highest peak visible from Banff, reminiscing about when she climbed it many years before. We got covered with wood ticks on that hike and spent the rest of the day picking them off of ourselves. That was the first time I heard her favourite expletive—”Bugger!”

When we were on a bus trip to the Columbia Icefield, I remember her mentioning, in her typical unassuming way, that she’d named the Weeping Wall. (Her niece Carole thinks she named Snowbird Glacier on Mt Patterson, and veteran hiker-author Don Beers heard that she named Rockbound Lake.) 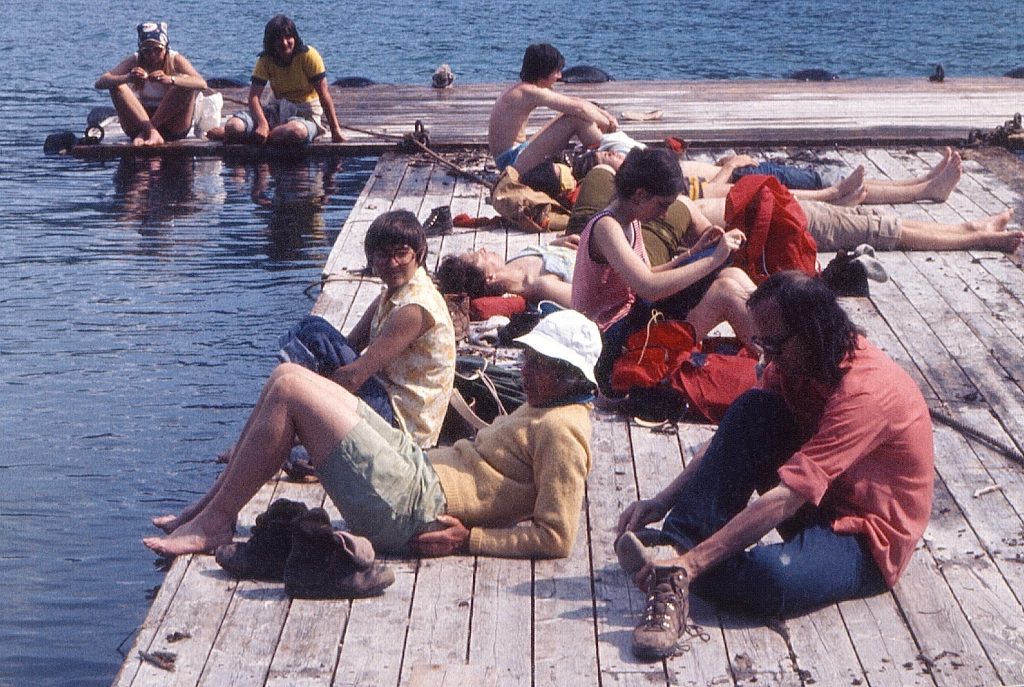 Aileen (left) cooling her feet at the Aylmer boat dock after a hike to the lookout ridge with Jon Whyte (right) and a group of Banff Centre students in June 1973. Brian Patton photo.

I can only imagine what a playground the lakes and passes above the Banff-Jasper Highway must’ve been for her when the road opened in 1940. As we drove past various points on the road, she pointed out favourite hikes, none blessed with a signed trail. “And don’t put them in your trail guide!”

She began her career with the National Parks Branch in 1938, and by the 1950s and early 60s she was designing and writing interpretive brochures and panels for many of Banff Park’s nature trails.  But when we hiked Parker Ridge, one of her favourite trips, I remember her complaining about the people who designed that trail: “They shouldn’t have put in all those switchbacks. It only encourages people to shortcut and destroy the alpine.”

I didn’t realize it at the time, but when I came up with the idea of publishing a trail guide for the Canadian Rockies, I was inspired by the Banff Park handouts and brochures that Aileen and fellow naturalist Bruce Gordon produced. I remember the articles on mountain park hiking trails she wrote for Canadian Geographical Journal in the 1960s. (I hiked one trail several times, trying to duplicate a photograph she took for one of those articles.)

Though her famous father got her into the backcountry on horseback at an early age, she recalled that “most of the time I have made my way on foot.” And when you read through her memoir, you realize there was scarcely a backcountry pass, valley or lake in the mountain parks she didn’t visit.

Though she built a cozy cabin for herself on St. Julian Road in Banff around 1940, which served as her base camp for 40 years, she would eventually create a new home and life in the lush forest of  Shawnigan Creek on Vancouver Island in 1981. The Banff she knew for nearly 70 years was gone, and she despised the commercialism that had engulfed it.

The last time I saw her was 2009, in Wilmer, B.C., when we were celebrating the 100th anniversary of Austrian mountain guide Conrad Kain’s arrival in Canada. (As a teenager, she spent summers at the Harmon family’s cabin next door to the Kain’s Wilmer home.) Though her 97-year-old knees were failing her, I still recall her suddenly jumping to her feet and bouncing across the rough, sunbaked field with her walker to grab a bratwurst-on-a-bun and retreating to wolf it in the shade. 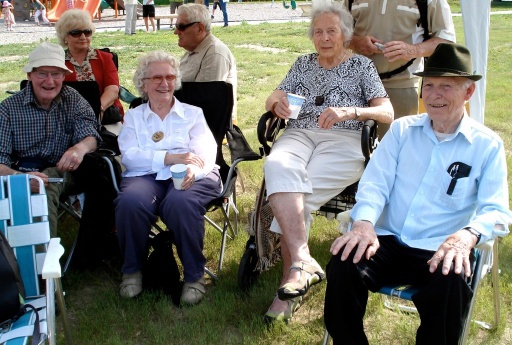 Aileen (second from right) with some of her mountain friends at the Conrad Kain Centennial celebrations in Wilmer, B.C. in 2009. Brian Patton photo.

These snapshot memories are special, but they are meagre compared to those who knew her well. Like the Banff “Playgirls,” who shared many days in the alpine and around the campfire. I’m sure all of us who are left behind have a sense of walking with the last.

Niece Carole has posted an appreciation summarizing Aileen’s life along with a few photos and stories, including her fledgling memoir. Check out “Obituary-Aileen Harmon” and learn more about this remarkable woman and her achievements as a backcountry traveller, naturalist-interpreter, and advocate for national parks.