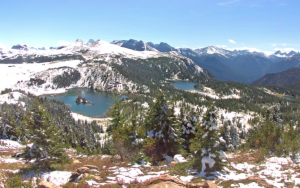 It started looking like the end of summer on Friday, August 21st as snow blanketed much of the high country above 2200 m. Heavy precipitation and falling temperatures brought several cms of fresh snow to the high country throughout the Mountain Parks. Meanwhile, temperatures fell to -2 degrees in Jasper, Kicking Horse Pass and Bow Valley Provincial Park in the early-morning hours on Saturday.

When we were working together in Banff, the late Jon Whyte and I always talked about getting the first whiff of autumn during the middle of August. We didn’t really have an explanation except that there was an unusual smell in the air, a pungent odour that came with the crisp air following a clear, sharp night. Years later, I came up with the theory it was the smell of subalpine meadow vegetation following the first hard frost of late summer.

Never fear, snow was nearly gone by Saturday afternoon and trails were drying rapidly. Trail conditions on most all routes in the Mountain Parks were listed as “good” and should remain so until late September, barring any further events like we had this week.

But flowers in the high country are wilting as I write, and the lush green meadows of summer are turning to red and gold. There is a whiff of autumn in the air.