Of a number of trails that have disappeared since the first edition of the Canadian Rockies Trail Guide, Howse Pass may be the most famous. The trail up the Howse River to Howse Pass and the Columbia Valley beyond was first travelled by North West Company fur trader David Thompson in June 1807. Over the next three years, the trail was used as the first transcontinental trade route to the Columbia River.

The trail has had a mixed history since it was abandoned by the North West Company in 1811. When we first hiked it for inclusion in the Canadian Rockies Trail Guide, it was in reasonably good shape—a couple minor creek fords and flooding along the Howse River in the early summer, but regular warden patrols and trail crew visits, plus the occasional horse party, kept a good track in place that was easy to follow. The trail was also part of the proposed Great Divide Trail, so it was fairly popular with long-distance backpackers. 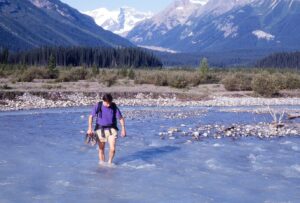 Conway Creek was a rather minor inconvenience on the hike over Howse Pass in 1993. Brian Patton photo (click to enlarge).

My buddy Mike Kerr and I hiked from the trailhead on B.C.’s Blaeberry River to Banff’s Mistaya Canyon in August 1993. The Parks Canada trail crew had just spent a few days clearing a rough path through the woods near the Howse River flats, so our trip was pretty uneventful. We completed and measured the 39.5-km trail from Cairnes Creek trailhead in British Columbia to the Howse River trailhead on the Icefields Parkway in two days.

I’m willing to be corrected, but I believe that was the last time a  trail crew ever worked on the Howse River trail. Things have gone downhill since then. After years without maintenance, Parks Canada deemed the section of trail between the Glacier Lake cutoff and Howse Pass a wilderness route and zoned it for random camping. As a result, the old track has been reclaimed by the bush and obliterated with deadfall.

The BC Forest Service has few resources to care for the trail west of the pass, but it has always been receptive to trail-maintenance assistance from volunteer groups. Not so in Banff National Park. For a number of reasons, too convoluted to discuss here, Banff Park has eschewed volunteer support.

We’ve left the trail in our trail guide for the most dedicated and experienced wilderness hikers, including a graphic description of the grim realities. And we publish the description in the hope that its historical importance will result in reestablishment some day.

Folks still want to retrace this famous fur trade route and disbelieve that it could be as bad as we say. Nowadays video speaks much louder than the printed word, so here is a wonderful 24-minute production provided by veteran solo backpacker Martin Belanger. Thinking about a trip to Howse Pass,  check out Marty’s “Solo Backpack Hike Howse Pass, Banff National Park, June 2014” first. (Marty provides some great backpacking tips as well.)