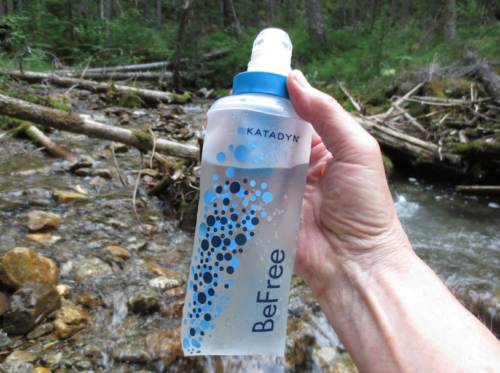 The Katadyn Be Free water filter system offers hikers a quick and easy way to rehydrate on the trail—simply scoop and drink. It comes as close as anything to the good old days of drinking directly from mountain streams. Brian Patton photo.

After years of searching for the perfect water filter for the backcountry, I recently discovered  the Katadyn BeFree Microfilter with Hydrapak 0.6L flask—a water filter and soft, collapsible bottle that comes very close to the good old days of scooping water directly from streams with a canteen or tin cup.

The variety of water filters and various treatment devises nowadays is overwhelming. Some people use tablets or chemical drops (chlorine dioxide), but you need 15 minutes or more to purify your water bottle. Some old-schoolers swear by iodine drops or tablets, but most folks don’t like the taste and colour, or the idea of ingesting iodine.

High-end purifiers guard against viruses,  but these units are more expensive, usually bulky, and require pumping—best saved for expeditions into dicey areas of the world. Boiling is an effective option but fussy and time-consuming, not really suitable for hikers, runners and backpackers on the move.

In recent years, I’ve occasionally used a Steripen, which uses ultraviolet (UV) light to purify the contents of my water bottle (see Hydrating with Steripen in the Canadian Rockies, July 11, 2014). But I find the process a bit fussy and time-consuming, plus I have to rely on batteries.

But most of the time I hike until my water bottle is empty then, out of poor planning and desperation, scoop from a water source that I’m reasonably confident is free of beaver and human pollution (the two animals most likely to sustain Giardia cysts in backcountry water sources). I’ve been lucky, others haven’t.

The Katadyn BeFree isn’t the first direct filter system, but it has the edge on other devices I’ve seen (Sawyer, LifeStraw, RapidPure). The collapsible, wide-mouth container is easier to fill, and flow-rate delivery is exactly the same as any sport water bottle (maybe better).

The Katadyn BeFree effectively filters bacteria, protozoa (Giardia lamblia) and particulate matter (glacier silt, murky runoff). It doesn’t filter viruses (human and livestock pollution), but that shouldn’t be a concern in most Mountain Park water sources. The filter is simple to clean (swish in tap water) and rated for 1000 litres, which is pretty much lifetime (replacement filters are available). But be aware, the filter screw-top only fits Hydrapak flasks and is not adaptable to other water bottles.

I find the 0.6 litre Katadyn BeFree perfect when you’re on the move in the backcountry and have frequent access to water sources. But if water isn’t readily available along the trail, you could find yourself wanting. Katadyn just released a 1.0 litre model last spring, which is handy for campers.

Check out details for the Katadyn BeFree on the company website.