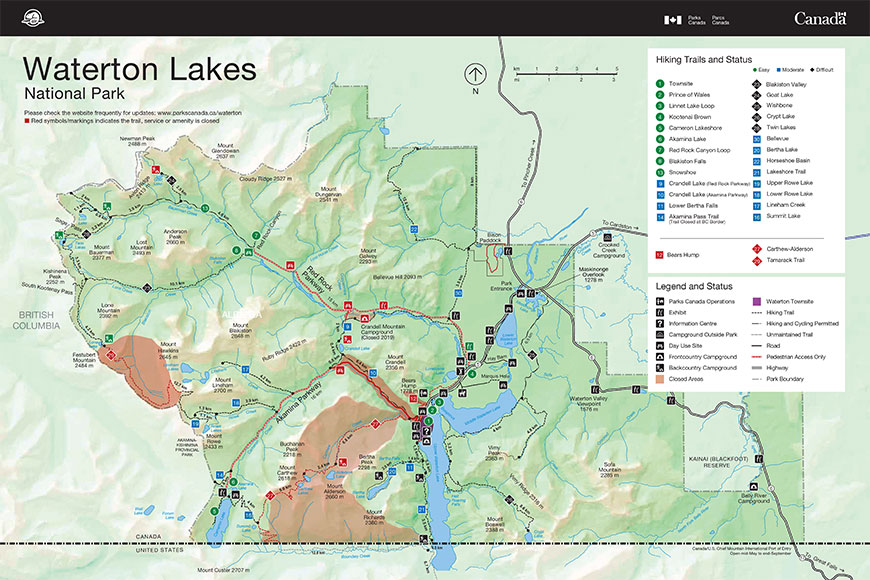 Parks Canada’s map highlights what’s open and closed for the 2019 season in Waterton Lakes National Park. While it looks like things are nearly back to normal following the 2017 Kenow Wildfire, the Red Rock and Akamina Parkways remain closed to motor vehicles this summer. But cyclists and hikers can travel the length of the Red Rock Parkway and the upper section of the Akamina Parkway (using the Crandell Lake trail as a cross-over) to access most of the trails in the western section of the park. Click here to enlarge map.

A lot of restoration is underway in Waterton Lakes National Park this summer as crews work to rebuild facilities, clear hazard trees, and restore roadways and trails in the wake of the devastating 2017 Kenow Wildfire. But limitations to motor vehicle access is creating a unique opportunity for cyclists and hikers to experience the park without the crush of motor vehicles and their occupants..

Parks Canada’s website for Waterton provides complete and detailed information for what’s open in the park. But it can be confusing. Here’s my take on the opportunities for biking-and-hiking on the Red Rock and Akamina Parkways.

As of this posting, the Red Rock Parkway is closed to motor vehicles, though it may open later this summer. But it is open to cyclists and hikers. That means you can cycle from the junction with the park entrance road all the way to Red Rock Canyon (14.1 km) as well as another 4.2 km along the Snowshoe trail to the Snowshoe Patrol Cabin-Twin Lakes trailhead.

All trails along this route are open for hiking, and most are in decent shape as of this posting. This includes Bellevue Prairie, Crandell Lake (192), Blakiston Falls (193), Goat Lake (194), and the Snowshoe-Blakiston Creek Loop (195), which includes Twin Lakes and Blakiston Creek hiking trails. (Trail numbers are references to descriptions in the Canadian Rockies Trail Guide.)

While it’s possible to hike along the Red Rock Parkway and Snowshoe trail, most visitors will want to cycle this scenic route. And folks who are fit and up for a full day can lock up their bikes at trailheads along the way and hike to such scenic destinations as Bellevue Prairie, Blakiston Falls, Goat Lake and Twin Lakes. 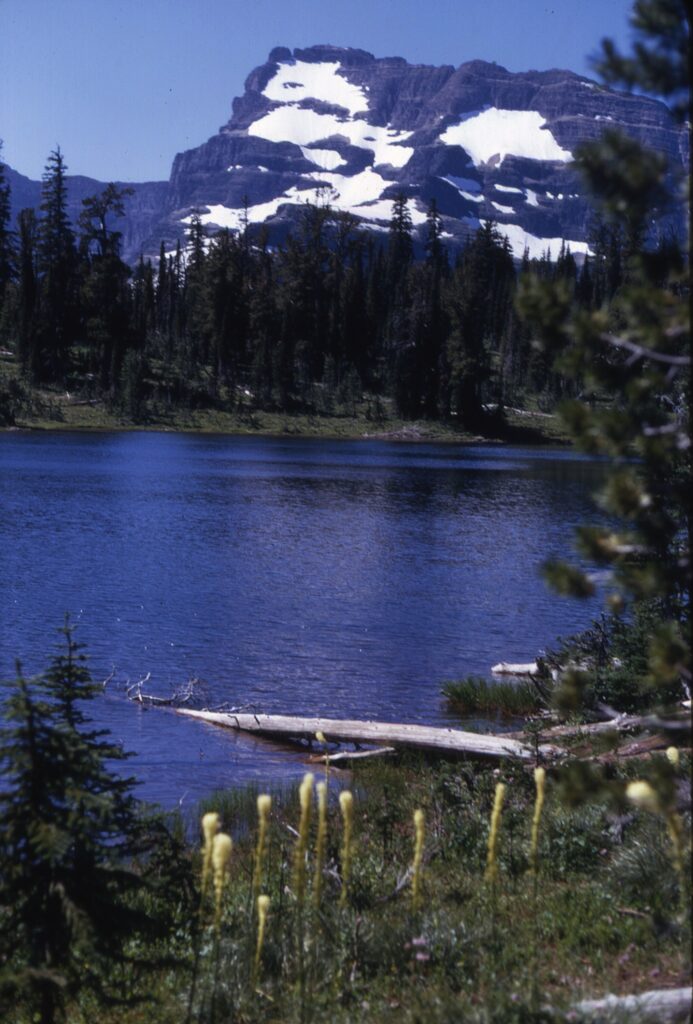 Summit Lake is a 4.2 km (one-way) hike from the trailhead at Cameron Lake, located at the end of the Akamina Parkway. A round-trip cycle to the trail via Red Rock Parkway, Crandell Lake and Akamina Parkway is 40 km. Brian Patton photo.

While the first 7 km of the Akamina Parkway is closed for post-wildfire repairs this summer, cyclists and hikers can access the upper section of the Akamina and its trails from the Red Rock Parkway via the 3.2 km Crandell Lake bike trail, which connects the two roads.

Like the previous, this access starts at the junction of the  Red Rock Parkway with the park entrance road 2 km north of Waterton townsite. Follow the Red Rock Parkway 8 km to the short access road leading left to the Crandell Lake trailhead. Continue on this bike-hike trail to Crandell Lake and the Akamina Parkway. Once you’re back on pavement, you can follow the Akamina Parkway for 9 km to road’s end at Cameron Lake.

As with trails on the Red Rock Parkway, all trails on the Akamina Parkway are open and in decent shape. These include Lineham Falls (187), Cameron Lakeshore (188), Summit Lake (189), and Rowe Lakes (190). As of this posting, Lineham Ridge and the Tamarack trail beyond Rowe Lakes and the Carthew-Alderson trail from Summit Lake to Waterton townsite remain closed.

The popular 1.4-km Bear’s Hump trail (182) above Waterton townsite remains closed while crews work to clean up wildfire damage and reconstruct the track. But everything else in the valley is open and in good shape. This includes Bertha Lake (183) and Waterton Lakeshore (184), though you will encounter fire-blackened forest on both of these hikes.

Meanwhile, its business (and busyness) as usual on the ever-popular Crypt Lake trail (186) on the east side of the lake. Likewise, the Wishbone and Vimy Peak trails (185) were unaffected by the Kenow Wildfire. 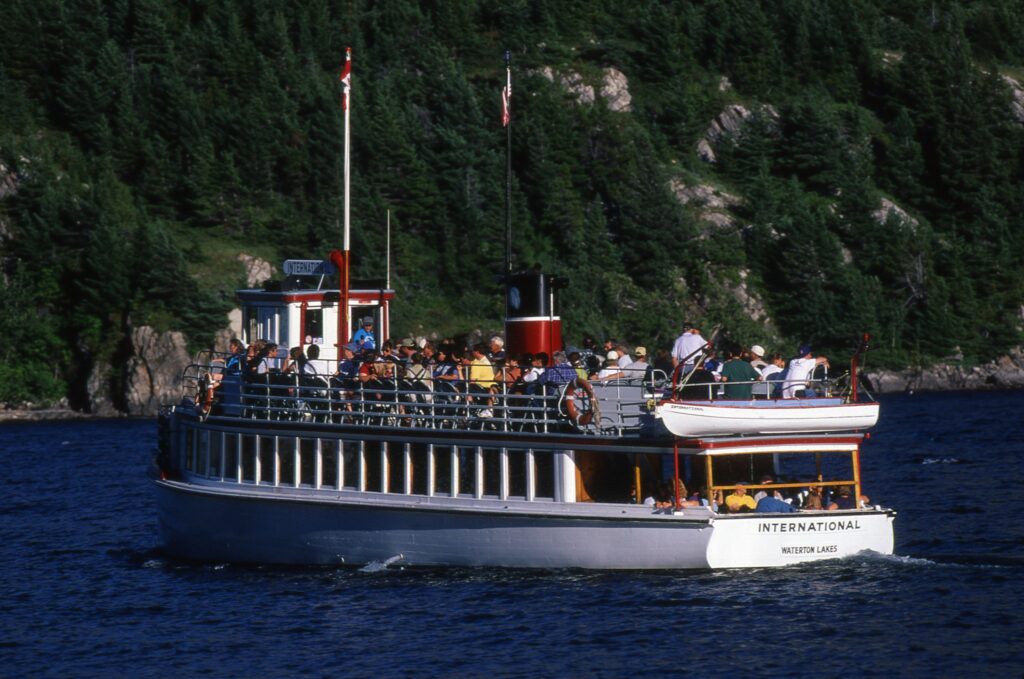 As the summer of 2019 gets underway, Waterton’s popular MV International launch is not landing passengers at the Goat Haunt dock at the south end of Upper Waterton Lake. So short hikes at that end of the lake are unavailable until launch landings resume. Brian Patton photo.

Last year I described some nice, short hikes you could complete in Glacier National Park from the Goat Haunt landing at the south end of Upper Waterton Lake (see Goat Hunt trails in Visiting Waterton Park in 2018). But as of this posting, the MV International launch is not landing at Goat Haunt due to a staff shortage at the Glacier Park Ranger Station. As a result, these short hikes are no longer accessible until the International resumes its normal landing schedule (maybe later this summer).

But anyone hiking into the U.S. from Waterton has a new, streamlined method of clearing customs via the ROAM app, which can be downloaded to your smartphone or accessed at Waterton’s Parks Canada Visitor Centre and the Waterton Marina Ticket Office…For more information about the ROAM app and the current situation at Goat Haunt, check out the Waterton Shoreline Cruises website page.